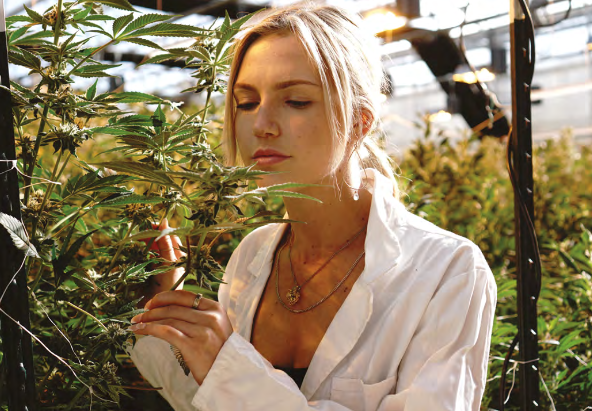 Humboldt County in Northern California is synonymous with cannabis. Referred to as the cannabis capital of the world, the Emerald Triangle that makes up Mendocino, Humboldt, and Trinity counties farm many of the cultivars we know and love, created in its fertile redwood composted soil.

Nathaniel “Nat” Pennington founded the Humboldt Seed Company in order to provide stable, high-quality genetics for himself and for local cannabis farmers. He began growing cannabis within the medical market in 1997, one year after California legalized the plant as medicine.

As many have done before him, Nat started growing cannabis in an effort to support his family in the economically depressed region, then turning to seed production to insure his own seeds were reliable for the next crop.

His company has become one of the most widely known and trusted seed producers in the country, if not the world.

But Halle’s story really began in a commune deep in the woods of Humboldt.

A twinkle in her daddy’s eye

My mom and dad were living in a commune or group home called Black Bear Ranch,” she explained. “It’s still there, two hours past the Salmon River. It was an old mining claim they took over and made into a kind of commune. That’s where I was conceived.”

Her mother, Nicolle Morris, was an activist working to save the redwoods. After hooking up with Nat at the ranch they decided their paths were different. Nat was just getting involved working for the fisheries and Morris left for Alaska to lay down in front of logging trucks in protest of clear cutting. She was in a remote logging area when she noticed her moon cycle had skipped a beat.

“We still have the letter she wrote my dad letting him know she wouldn’t be able to do a pregnancy test until she went into town,” Halle continued. “In the letter she told him she had a dream that she gave birth to a girl and she told my dad to think about what they should do.”

Once the test was confirmed positive Morris made her way back to Humboldt and to Nat’s arms, and the rest, as they say, is history.

Halle came of age in the hills of Humboldt County, nurtured in a tight-knit farming community. She learned to respect the river and the forest from Yurok Tribe members.

“Life was simple up in the hills,” she shared. “I was able to learn at my own speed in a small 25 student rural school. When we moved down to Arcata to live in town I started attending Arcata High School, and was surrounded by hundreds of kids, with so much drama. It was a rude awakening from the life I knew.”

The City of Arcata is a progressive town known as “60s by the Sea.” It’s population hovers around eight thousand when Humboldt State University isn’t in session, raising the population to around 16,000. But to a young person who only knew hill life, it was a rude awakening.

Stress set in and the 14 year-old was eventually diagnosed with anxiety, depression, and regularly scheduled visits with a therapist.

“I had started sneaking smoking cannabis behind my mom and dad’s back when I was 13,” she shared. “I grew up around weed and alcohol, but alcohol didn’t really interest me. I was suffering from both day and nighttime anxiety and related insomnia. I’d tried prescription medications but they left me feeling like a shell of a person – made me numb, I didn’t feel anything.”

Soon she figured out that cannabis calmed her more than the pills and she began exploring different cultivars for relief.

“I fell in love with Blueberry Muffin,” she said. “It has this mellow, uppity high that keeps my head from spinning in circles. I find that it gives me the help I need. It’s quite remarkable in that way. If I smoke a bowl and have an exciting project going on, it gives me energy. If I’m a bit tired it makes me more tired. The wisdom of the plant seems to deliver what I need.”

Halle isn’t too far off from the theory that the beneficial compounds of healing plants like cannabis send what the body needs, where it needs it through the endocannabinoid system – the vehicle in which all our biological systems are fed.

Developed in 2009, Blueberry Muffin was developed by Humboldt Seed Company and has become its signature cultivar. Having the uncanny flavor of a blueberry muffin – the flavor of which is found in the terpenes. The prominent terps in Blueberry Muffin that make up the flavor profile are caryophyllene, myrcene, and limonene, in that order.

“I generally smoke for the terpenes, not the THC,” she added. “I enjoy a practical high and I’m not one to get super stoned. My favorite way to consume is by smoking a doobie or hitting a bong with sun-grown flower – because the terps are so flavourful with outdoor grown in the sun, there’s no comparison. I may do an edible if my insomnia is bad. That’s what’s so great about cannabis, you can choose your own adventure!”

Adventures aside, longtime Emerald Cup judge, Swami of Swami Select of Mendocino, informed that the cup winners have never won for the highest amount of THC (pun intended), but for the full terpene and cannabinoid profile. Flavor, not recreational value is coveted in the cannabis capital of the world.

Timing is everything, and Halle said that if legalization didn’t happen when it did, she may have chosen another work path altogether. It’s important to note how unique it is for a young woman to have a legacy such as Halle’s – to have genetic knowledge handed down to her in this way. Halle added that it wasn’t always this easy to get the information in the first place.

“When my dad was coming up in farming cannabis he didn’t have the internet to search for information,” she explained. “‘All they had was word of mouth, and most farmers up here were tight-lipped. You had to gain trust to succeed. Now, both colleges up here have extensive courses in biodynamic farming practices – the same practices my mom and dad used to grow organic food in the commune where they met.”

Cannabis farmers graduating from either HSU or CR are nothing short of scientists in the field, with many staying in Northern California, becoming part of the cannabis industry. HSU also allows graduates to design their own degree and curriculum, something that works well when studying business with biology and agricultural practices. Custom made for the cannabis industry that crosses over into just about every single industry there is.

The challenge has become making a living in the legal market. Gone are the three to four thousand dollar pounds once found in the medical market, let alone the five to six thousand a pound from the illicit market back in the day.

Promised $1200 a pound when legalization took hold, in the end the farmers to the north were offered a mere $400 a pound – not enough to subsidize the crop of a small, legacy farmer.

In mainstream agriculture when food farmers can’t sell their crops for a living wage, the U.S. Government subsidizes them, keeping them afloat another year. The cannabis industry is the ugly step-child where fairness in wages are concerned, with nary a helping hand from the government who has the plant listed on Schedule 1 next to heroin – stating no medicinal value whatsoever, causing it to remain federally illegal. The cause and effect for legal states is highly hypocritical, as the plant touches every business in its wake, affecting many – even those who never touch the plant.

“The reality of Humbold and the cannabis industry in Northern California in general is, no matter what you are doing to make a living, you are somehow benefitting from the cannabis industry and the revenue that follows,” she informed. “This industry has kept local shops alive for decades. If a school needed something done, a farmer would step-up. Now, with the low rate per pound and the extremely high taxes charged in California, the community is hurting in general.”

Unable to be civic minded without proper reimbursement, the trickle-down theory has never been more apparent to the region. The cannabis industry in general needs to acknowledge the legacy farmers to the north and all that implies, including acknowledging that outdoor, grown in the sun cannabis in the organic craft cannabis market is superior to large-scale cannabis agriculture, and reimburse accordingly.

“The only way these farmers will survive is to acknowledge the work they’ve done and are doing and support them,” she surmised. “These are the farmers who started the cannabis industry. We are the families who were able to stick through the raids and the fluctuating price per pound. These farmers need the respect they deserve from the industry and they need to be able to make a living.”

Halle said she’d rather pull tarps over a flowering crop in the rain (something she’s done more than she wants to admit) than do the desk work now involved in the red tape of legalization – what the industry has become.

“I love the farming of cannabis, and I need to keep that focus” she concluded. “The paperwork has become a necessary evil. When we see people coming up to Humboldt to farm, it’s important they respect our culture and our morals as a community. The ones in it for the money get run out of town. That’s the magic of the north coast cannabis community – it’s a natural selection process, not just with the flower.”’