‘Her life would be completely different’: Why one Kentucky mother wants to legalize medical cannabis 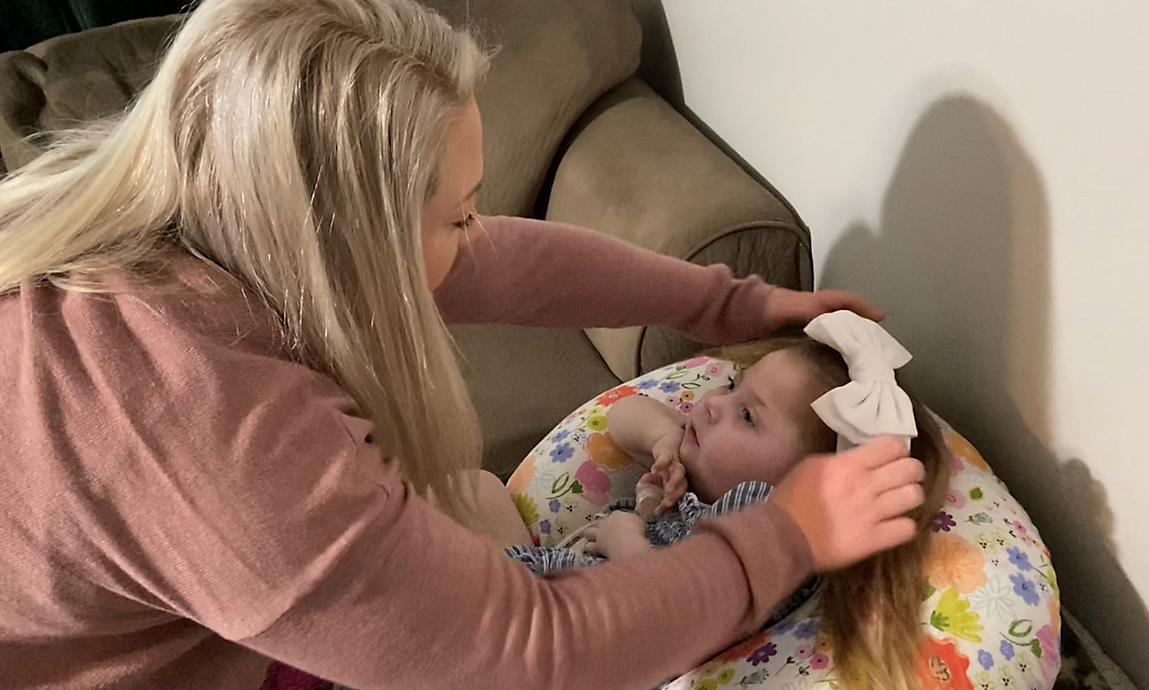 Alexandria Fulkerson never set out to be a nurse, but once her daughter, Kolbie, came home from the hospital, the 28-year-old had little choice.

She has spent much of her short life either having seizures, being sedated to stop her seizures, or taking powerful pharmaceuticals hoping to fight them off.

Five times a day, Fulkerson gives Kolbie 16.2 mg of Phenobarbital, a common epilepsy drug. When Kolbie has seizures, Fulkerson sedates her with midazolam, often referred to as a rescue medication. But Kolbie can only receive midazolam four times a day and sometimes the seizures don’t stop.

Over the years, Fulkerson served as doctor, nurse, and pharmacist for her daughter, but there remains one medication that Kentucky law says she cannot give Kolbie: cannabis.

“I think it would help dramatically compared to the pharmaceuticals,” Fulkerson said.

Kentucky remains one of only 13 states that has not legalized the use of medical cannabis. With just two days left in the 2022 legislative session, that appears unlikely to change this year, despite the state House overwhelmingly passing House Bill 136 last month with a 59 to 34 vote.

HB136, which allows the use of cannabis to treat six conditions, would create one of the most tightly regulated medical cannabis markets in the U.S.

For Julie Cantwell, who has spent eight years fighting for similar legislation, the bill is too restrictive. But she’d like to see it pass anyway. “I think we need to help sick people now,” she said. “It’s past time.”

The president of the Kentucky State Senate doesn’t see it that way. Last week, Senator Robert Stivers told reporters that HB136 bill is unlikely to pass his chamber before the General Assembly adjourns for the year on Thursday. He said he would prefer to see more research on cannabis.

“I think that we’ve had enough research,” said Cantwell, who began advocating for medical cannabis to help treat her son’s seizures. “We’re not going to find something here that 37 other states have not found.”

Fulkerson doesn’t need to see any research to be convinced that cannabis would help Kolbie. She’s already seen the positive effects of CBD oil, which slowed Kolbie’s heart rate during seizures. She believes the whole plant would be even more effective for her daughter and helpful to countless others.

“That’s a lot of people that are sick, some that are dying, some that can’t move,” she said. “They want to feel better. Why not give them rest and peace?” she said.

‘Her life would be completely different’

Kolbie “can’t do much, but she does have a little bit of an attitude,” Fulkerson said. She likes to relax, spend time with her grandfather and tug on her trach tube.

Her condition has delayed her development, leaving her unable to smile or cry. She doesn’t make voluntary movements and doesn’t interact with her parents or her siblings.

Fulkerson believes medical cannabis may be able to reduce Kolbie’s seizures and replace the sedatives she takes. She also finds hope in the success stories other families tell.

“There are families in other states that have been able to get their children to be so much better with it,” she said. “That’s what hurts, seeing other parents being able to do it for their kid and I can’t.”

Sometimes people tell Fulkerson she should move to another state where medical cannabis is legal, crossing what Cantwell calls the “imaginary lines” separating those who have the option to treat a medical condition with cannabis from those who don’t.

“We shouldn’t have to move,” Fulkerson said. “I have support from Grayson County. All my family is here. We can’t leave them. With blended families, you can’t do that. And you shouldn’t have to.”

Fulkerson also wants to keep fighting for other Kentucky families who might find themselves in a position like hers. “I don’t know what Kolbie can do in the future, but I know that other kids, if they’re able, would benefit from this,” she said.

She also believes that medical cannabis can prevent other children from following the same path Kolbie has. Fulkerson says the medication Kolbie took as an infant, combined with the seizures she suffered, stunted her development. “I guarantee that if she started this before all the medications, her life would be completely different,” she said.

‘My fight is for Kolbie’

With two more days for lawmakers to push HB163 across the finish line, Cantwell is not ready to give up on the legalization of medical cannabis this year. She’s recently begun sharing personal stories on the social media pages for Kentucky Moms for Medical Cannabis, which she leads. Advocates with Kentuckians for Medical Marijuana are urging supporters to lean on their Senators.

But Cantwell worries that Gov. Andy Besehar’s support of medical cannabis could prevent the Republican-led General Assembly from approving the measure.

If that happens and Kentuckians remain without safe, legal access to medical cannabis, Cantwell said she and other advocates will regroup and prepare for next year.

Image: Alexandria Fulkerson says he daughter, Kolbie, would benefit from the use of medical cannabis. (Spectrum News KY/Adam K. Raymond)