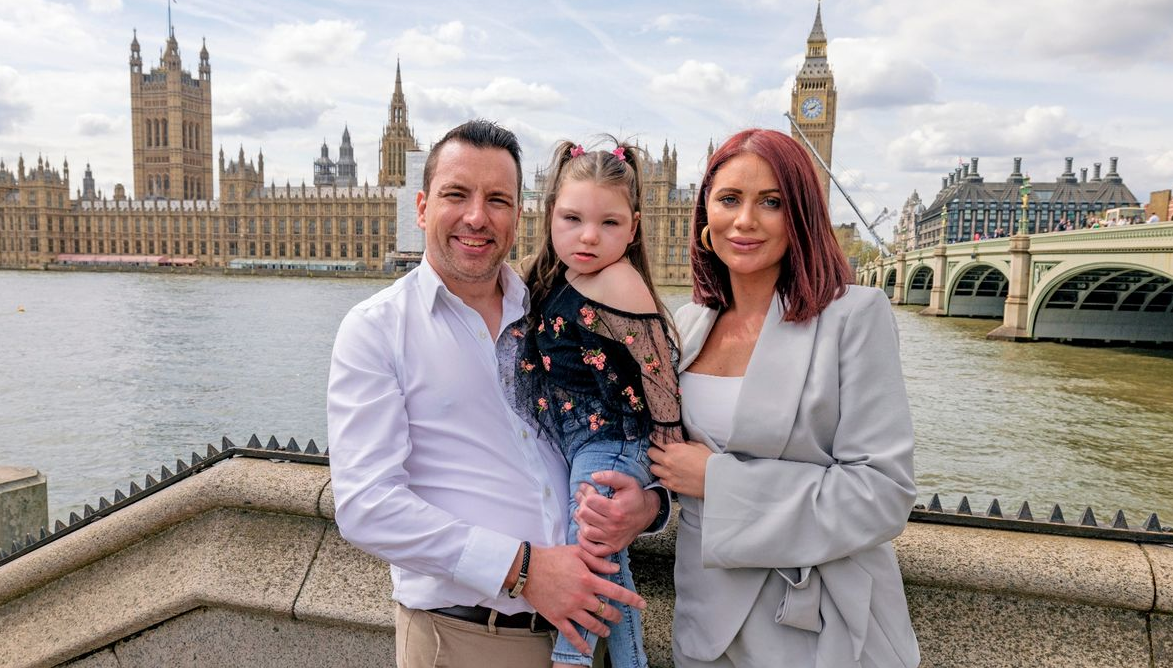 Amy, 32, plans to go to Downing Street on May 25th to sit down with Boris and his wife Carrie and talk to them ‘parent to parent’ after being ‘moved to tears’ by the story Robin Emerson, who says his six-year-old daughter Jorja had her life saved by the treatment.

Tireless campaigning from the Emerson family and other parents saw medical cannabis legalised in 2018.

But due to government bureaucracy patients aren’t able to access the drug on the NHS and parents are forking out up to £2000 a month to help keep their children and loved ones pain free and alive.

Amy and the Jorja Foundation have launched a petition in the Sunday Mirror to campaign Parliament to grant medical cannabis on the NHS to those that need it.

Speaking exclusively from outside Parliament about what she will say to Boris next month, Amy says: “I will sit down face to face with him with Jorja and tell him about this wonderful little girl.

“I’d tell him all about how I feel about Jorja and how much money Robin has paid out on Jorja’s private prescriptions before a private company had to sponsor her medication.

“When I believe in something, hand on heart I will do all I can to change things.

“I am so passionate about this and will do all I can to help Jorja and her parents make this happen so no other families have to suffer.”

Amy admits tweeting Boris and did not receive a reply. But a defiant Amy says she will make him take notice and will appeal to his human side as a father.

“I know that anybody with a heart cannot help but be moved by Jorja and what she and her family have been through,” Amy adds.

“There is an easy solution to this; it is within the government’s control.”

The TOWIE star first heard about Jorja on social media and after reading her story reached out to Robin to ask what way she could use her fame and platform as a personality to help their cause.

She flew to Belfast to meet with them and the families have struck up such a close friendship they talk every day and have been several times to stay at each other’s homes.

“The first time I met Jorja I burst into tears. I talk every day on the phone to Robin, and we have a real bond now as a family.

“My mum has fallen in love with Jorja as has my partner Billy and my two children Polly and Ritchie idolise her. She is so special to us.

“Yesterday I sat cuddling her and got lots of smiles – she recognises my voice. I get choked up because of what Robin has been through as a dad and the two of us.

“Even last we cried about what he had gone through as a dad. As a parent it would be your worst nightmare being told to take your child home to die.

“I think of my children who are my world and Jorja’s parents and how hard they are fighting to save their little girl and other children in similar situations and I just want to do everything I can.”

This includes running the London Marathon again to raise funds for the campaign and she is writing to her local MP Alex Burghart. Amy is also Creative Director of a range of natural products with legal CBD, called Jorja Botanicals and a percentage of the profits go to the Jorja Foundation to help other youngsters with the condition.

“My goal is to get the Jorja Foundation out there,’ Amy adds.

“I’m going to do the marathon again. I ran it six years ago – I was very slim back then, no children, but for Jorja I would do anything and the marathon would be an amazing achievement.”

Jorja from Belfast, Northern Ireland suffers from a rare chromosome disease and was having up to 30 life threatening epileptic seizures in a day delaying her development.

But since taking medical cannabis oil three times daily Jorja has not set foot in a hospital aside from the odd routine appointment.

“It just requires a policy change and somebody to turn around – Savid Javid could do it with the stroke of a pen,” urges Robin who has written to the Health Minister only to be ignored.

“Clinicians can’t understand why it is not happening. There seems to be a disconnect between the government and the NHS.

“There are approximately 10,000 private prescriptions in the UK for medical cannabis products for adults and children for various different illnesses and it is increasing rapidly.

“The private sector have been making it available yet the NHS is still to prescribe to anybody since the law changed in 2018 which is strange as then it was Savid who had changed the law when he was Home Secretary and he gave the speech to the house.

“Children are still suffering and as health minister he can carry forward the change appealed in letter.

“600,000 children have epilepsy with approximately 30% of having intractable epilepsy meaning current NHS medications are not controlling their seizures.

“We estimate two million people in UK could benefit from use of medical cannabis.

“Jorja has not stepped foot near a hospital since she began medical cannabis in three years.

“There would be 999 calls every other week and twice she was in intensive care on life support costing £12,000 a day. Now she is thriving and this move will save the NHS millions.”