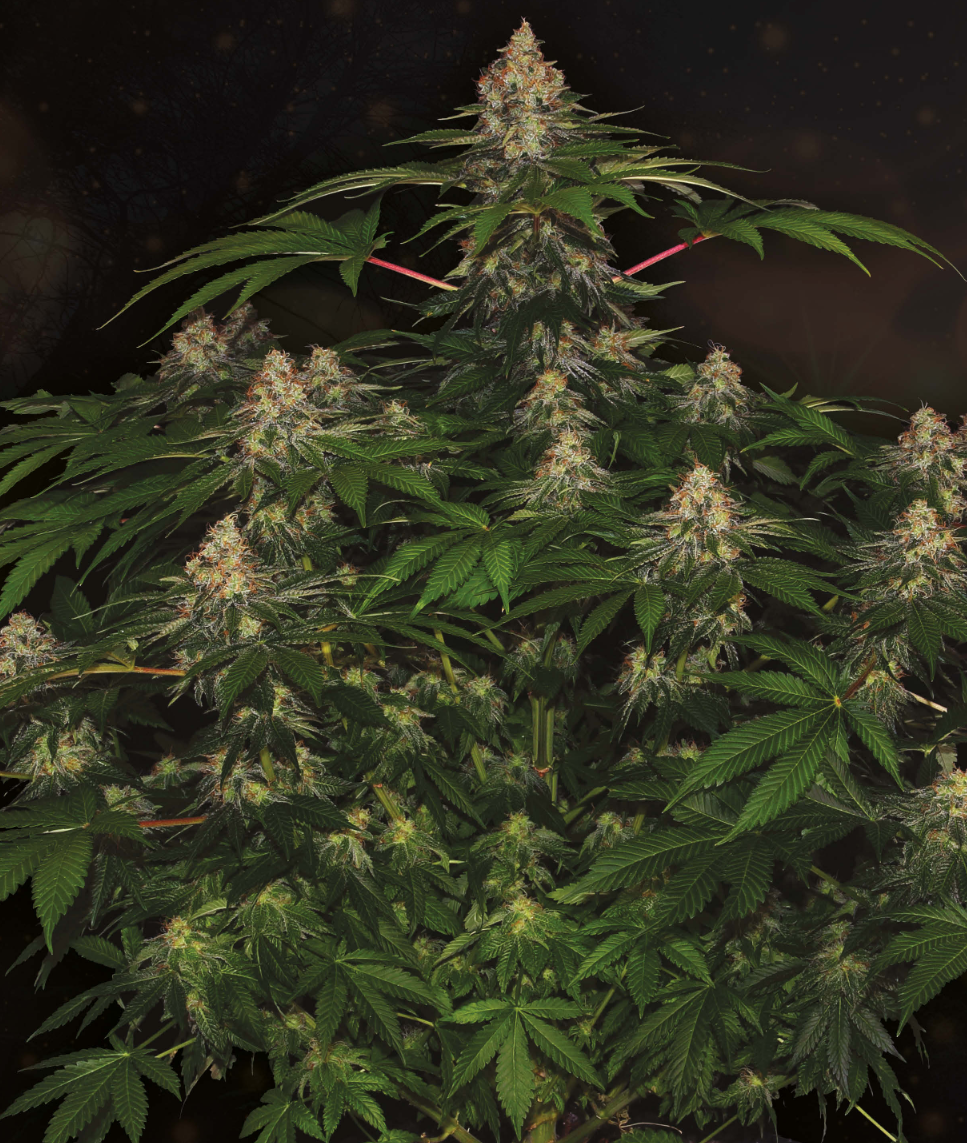 Barney’s Farm’s exquisite Cali collection presently encompasses 13 strains, and the almost pure indica (80%) Shiskaberry is one of them.

Undoubtfully a must-grow for the die-hard indica lover The Doc! He would have taken her “blindly”, but was of course full of curiosity and informed himself beforehand about the characteristics of this variety sounding so promising.

The Barney’s breeder have put a lot of work into its development and bred it for years till satisfaction. On the mother’s side, there’s an old acquaintance – the sublime fruit strain classic Blueberry.

Shiskaberry’s father stands for down-to-earth robustness and reliability, it’s a classic old-school Afghani. Hybridising these two resulted in a powerful indica plant with above-average indoors yields (500-600g/m2) produced within a fairly short flowering period of 7-8 weeks. Outdoors it works very well, too, thanks to a pretty early finishing time under natural light in the third to fourth week of September. Another plus factor for both outdoors and indoors, Shiskaberry’s mould resistance is rated at 4 on a scale to 5, i.e. very good.

Although being a rather short stature variety, with an extended veggie stage it’s got a stunning outdoor yield potential of up to 1.5-2kg per plant. Another strength lies in its intense pungent aroma that dazzles the olfactory and gustatory sense with an earthy sweet berry character. As for the effect, Barney’s announces that Shiskaberry lifts the user onto a meditative philosophic spiritual level, “submersing him in a deeper dimension of delight and insight”. So deep relaxation and happiness is on the agenda – “who wouldn’t want that?”, a smiling Dockie said full of happy anticipation. According to Barney’s, Shiskaberry is a very easy grow room companion with a difficulty level rated at 1, „easy-peasy“, as they say in California. Well, for the highly experienced master grower The Doc things don’t necessarily need to be easy, but of course he doesn’t mind growing uncomplicated strains as well. Just as expected, the two feminised seeds sown aced germination, standing straight up above the surface after three days. Due to their heavily indica dominant nature, The Doc gave his two Shiskaberry plants a veggie time of five weeks.

Which they really needed as they grew extremely tight-noded, evolving into ultra-compact bushes with dark green wide foliage. “One cannot see through them a single millimetre, as super-dense and multi-branched as they are”, reported The Doc at the end of the veggie stage, “these two plants are presenting themselves externally as some uniform full-blooded indicas with low heights of 29 and 33 cm.

But through stretching whilst flowering, certainly more light will reach the side branches and encourage lush bud growth. To additionally support this, I’ve removed some of the big shade leaves. Not too much of course since they contain a lot of assimilates important for the energy budget of the plants.”

A scintillating spectacle with thick buds and a sensational odour

During the first four weeks of flowering, the two Shiskaberries stretched decently, indeed, so that that their canopy became more open and those many flower formations could develop magnificently. Typically bulbous chubby indica buds emerged and increasingly ballooned out over the weeks, with resin literally dripping out of them, so richly the Shiskaberry calyxes and flower leaves, including big ones, were drenched in trichomes, it was one scintillating spectacle.

From The Doc’s grow diary: “This is top-notch indica flower quality in the purest of forms! Almost even greater than looking at these buds though is smelling them – because the fragrance they’re exuding is simply awesome: As if one collected berries on a forest clearing, with the sun shining after rain, making the earthy spiciness of the damp forest soil rise up in the air, merging with a sweet and slightly tart berry scent into a heavy hearty aroma.

After precisely 56 days, at the very end of the finishing time stated by Barney’s, the two Shiskaberries were fully mature, allowing The Doc to reap his harvest, “to pick some real fat canna-berries”, as he chuckled. One plant stood 59 cm tall in the end and the other one 72 cm, due to stronger branch elongation. Once again The Doc got a big surprise when he weighed the buds a few weeks later as the two Shiskaberry specimens just scraped past the 100-grams-per-plant-mark, yielding 198 grams altogether.

Commented The Doc, “in view of their stocky size I had been deceived here, but that enormous density and granite-like solidness of the buds eventually gave a damn big harvest, hooray!” The bouquet had additionally gained a savory sweet note of honey over the drying process which together with the still present earthiness and berryness made for a bewitching berrylicious scent experience. Getting high on Shiskaberry: The Doc turns into a buddha, with the heartbeat of a blue whale

That bewitching scent translated into a likewise bewitching taste when The Doc sampled Shiskaberry for the first time: When the vapour out of his Mighty vaporizer wafted into his mouth, all taste buds signalled “this is berry-sweet spiciness to the max!” This full-mouth flavour also lingered on the palate very long. “What a delicious treat, even entirely fee of calories!”, The Doc joked. As soon as after two voluminous drafts of vapour, it felt as if a pleasant bodily warmth was arising deep inside, flowing into his limbs and making them lithe and relaxed. Simultaneously his head underwent a gentle THC massage that seemed to put a cushioning veil around it, keeping away any negative thoughts and putting him in a state of blissful content and deep relaxation.

Whether it was due to the fact that Barney’s had talked about “a deeper dimension of delight and insight” or not – getting high on Shiskaberry really led to introspection and contemplation, leaving The Doc with a feeling of being at peace with himself and the world. Over two hours he was sitting on a big pillow like a grey-haired buddha whose heart was beating – at least perceived – as slow as a blue whale’s one.

In conclusion, he said “Shiskaberry is a true champion strain right out of the indica picture book! She has proven to be great in any aspect, with an excellent growth and bloom performance, fat yields, an adorable flavour and a meditative happiness effect that pampers body and mind. This plant managed to make my indica heart leap up!