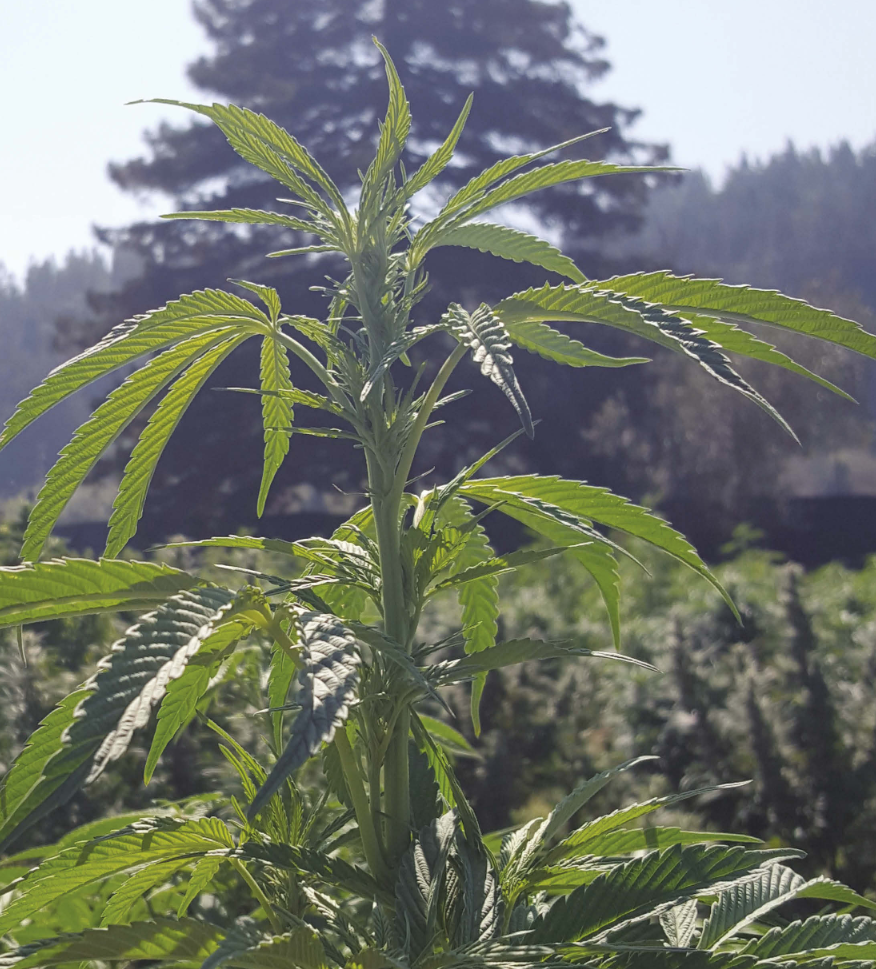 How Humboldt’s Sungrown Farmers Handle the Flowering Cycle and Harvest

This article is part of an ongoing series in collaboration with Kevin Jodrey to give the world a glimpse of the cultivation knowledge incubated in the hills of Humboldt County, California. Jodrey is an internationally respected cultivator and propagator, and he currently runs Ganjier Farms and Wonderland Nursery in Southern Humboldt. In this series, we’ve tapped into Jodrey’s experience and that of other experts to reveal the specific techniques and tools that top tier farmers use in the Emerald Triangle.

Part 1 looked at selecting the right genetics in Issue 128, and Part 2 tackled the art of building soil in Issue 129. We covered the best methods of transplanting both indoor and outdoor plants to minimize plant stress in Issue 130, and followed that up in Issue 131 with the best ways Humboldt farmers provide for their plants during the vegetative growth cycle.

Now we’ve reached the stage where farmers begin to see the fruits of their labor (and their mistakes): the flowering cycle.

In the two weeks leading up to flowering, Humboldt farmers are preparing their plants to create beautiful buds. These steps are important to get right, but a majority of the work (or the damage) has already been done, according to Jodrey. “Your vegetative cycle is where you nail it,” he said. “That’s where you create the reserves and the sink, basically the nutrient sink in the plant, so it can draw from the leaves and the plants the nitrogen and macronutrients that it needs while it’s working on picking up phosphorous. That way, that plant can slowly pull the nitrogen out of the plant as it goes through its flowering cycle, increasing the quality of the flower because the nitrogen is what gives it that minty chlorophyll flavor.”

At Jodrey’s Ganjier Farms in Southern Humboldt, he worked this season with Dia Damon and Spencer Damon of Nomad’s Landing to get the farm ready to flower. They’re award-winning cannabis farmers, and they now specialize in creating natural farming inputs. Dia said the prep for flowering begins “about two weeks before you’re expecting your girls to be in flower, showing popcorn.”

“We like to start doing our Fat Flower tea and boost up the calcium just a little bit,” she said. “That’s when they start to build their flower sets and their structure. Having everything readily available in the soil for the plant to uptake it … That’s the key.”

To protect the integrity of the flowers, especially with California’s approaching testing standards, farmers don’t add much during the flowering cycle. For the last top dressing about two weeks before flowering, Dia said they add gypsum as a “taste booster,” giving the plant what it needs to let the terpenes flourish. Terpenes are sulfur and nitrogen based, so adding gypsum gives the plant the materials it needs to increase terpene production, Dia said. They also add bokashi or IMO 4, like they have all season.

“The native bacteria is IMO 4 taken out to the 4th stage,” she said. “We capture and culture microorganisms on a substrate and that’s IMO 1, then we culture that out to inoculate it with the soil.”

Spencer Damon said pruning is another big step to prepare for flowering, and an easy way to maximize your yield. Prune so the plant can receive as much light and air as possible, and remove all of the sucker branches. At Oaksterdam University in 2010, the Damons were told whatever you remove within first two 2 weeks of flowering, you will not lose a single gram of flower in weight from pruning.

“As a plant grows, the bottom branches are larger and the next size is smaller and smaller and smaller, all the way up to the top,” Spencer Damon said. “When you come across a big branch, a small branch, then a big branch, you want to remove that small branch. That sucker branch shouldn’t be there, kind of like a tomato plant. Those essentially rob from your larger foliage.”

Some farmers take pruning a step further to maximize their flower quality. Sunshine Johnston, the lead grower of Sunboldt Grown who has been farming for decades, said she cuts away about ⅓ of the plant or more when she’s growing for flower production, leaving only “the most vigorous branches.” She doesn’t do this kind of pruning for plants destined for concentration — flower needs to look stunning to move in the regulated market, she said, and thinning the plants heavily means each plant will put all its resources into every bud that is left.

“I basically create the flowering crown, what I’m going to let go to flower, and then I do a sanitary spray,” Johnston said.

That sanitization has a few stages. First, she sprays Trifecta to weaken the bugs. Then she follows that with a Grandevo spray to infect the pests. Anything like russet mites that remain are now weakened and infected, making them prime targets for predators. That’s when Johnston introduces beneficial insects to her Southern Humboldt farm.

The Damons agree that is the ideal time to put out predator bugs at Ganjier Farms. The beneficial bugs need to be out there at least two weeks before flowering, otherwise they won’t be effective, said Spencer Damon. “Once they go into flower, you’re kind of restricted on what you can do. It takes predator bugs a while to kill the pest insects, so you want them to get all of that handled before all of those go into flower.”

Dia Damon said the pest bugs are really attracted to trichomes on cannabis — if pests like russet mites have a chance to take hold of the flowers before the predator bugs can take them out, the result isn’t good. “The pest bugs get behind the trichomes and underneath them, so it makes it difficult for the predator bugs to get in there,” Dia said. Spencer added, “Imagine swimming through a sea of trichomes to get your food. It wouldn’t be easy!” 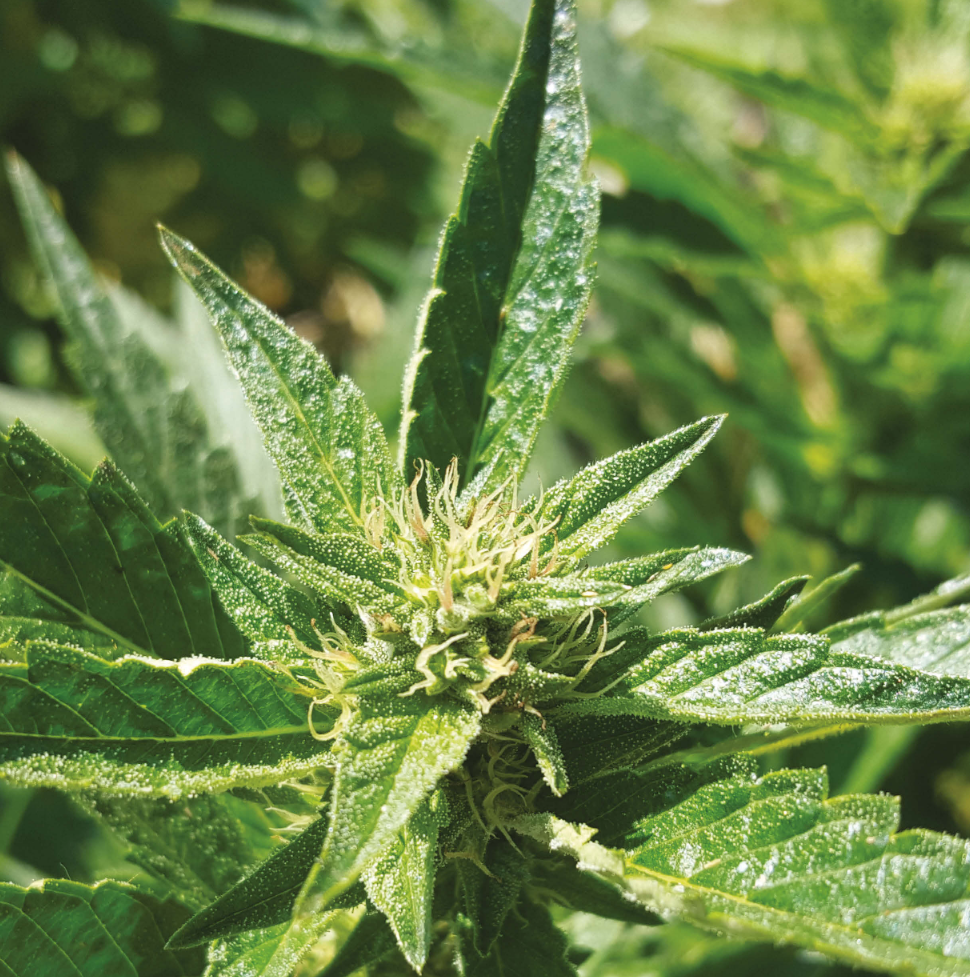 In Humboldt, Kevin Jodrey said most plants start to trigger into flowering around the end of July. Growing in the sun means plants are triggered by more than just diminishing light. “It’s also changes in temperature and changes in spectra. As the angle of inclination changes as the season changes, the color of the light of the sun actually changes because it’s refracted.” This gradual change in the refraction of sunlight is different than what indoor plants experience, he said. Most indoor lights replicate only the springtime sun, not the full season of sun spectrum.

“That light is not just energy, but information. It tells the plant there are changes occurring. When the plant starts to sense these changes…at the soil level, it starts to change the exudates formed at the root zone,” Jodrey said. “They start to decrease the bacteria and fungi that generate nitrogen uptake, and start to intensify the bacteria and fungi that generate phosphorous uptake.”

The trigger time for outdoor cannabis is a combination of light hours, temperature and spectrum — these factors are why Jodrey said you cannot assume a cultivar will take the same amount of time to flower outdoors as it does indoors. Plants sorted for outdoor work are far more aggressive in their flowering curves than other strains that flourish under controlled lights, he said. Jodrey used William’s Wonder as an example: A famous indoor strain that needs to be forced to trigger with low light hours. Try to run it outdoors in Humboldt though, and Jodrey said you’ll be harvesting that in December.

Most strains trigger when there’s 13.5-14 hours of daylight, and “you can measure from there forward to finish,” Jodrey said. Plants that need higher light levels need to be placed in a place where they can get that, but he said not all of them do. Girl Scout Cookie actually does well with reduced light at the end of the season. “OG or Sour in the same place would not thrive though,” he said.

After the strain triggers, the plant no longer wants to take nitrogen up in the same way; it wants to take up phosphorous, Jodrey said. “Once we have the plant make this metabolic change, where physiologically it is changing what it is about to become, it no longer focuses on vegetative production. Therefore, basically you are stuck with what you have.”

Outdoor cannabis plants are typically heartier than their indoor counterparts, but they also grow more massive buds that weigh branches down and sometimes break them, Jodrey said. Depending on the cultivar selection, creating a structure will save your branches from breaking and the unfortunate loss of your densest buds. Support structures can be done two ways, according to Jodrey:

Not all plants need support structures, however. Sunshine Johnston said she keeps the plants at Sunboldt Grown smaller, anywhere from 5-7 feet tall. “The point is, besides not needing trellising, I want to be able to cut every part of the plant,” she said. “I don’t want a plant that is out of my reach.”

Dia Damon called this “the million dollar question.” The old school method is to wait until the third swell of trichomes are present in the flower to get maximum yield, Dia Damon said. “Now you’re taking it more or less halfway in between.”

Though that is the modern approach to some, the old school way is still preferred at Ganjier Farms, so they have selected cultivars that are up to the task. Why? That extra time in the sun makes a difference. Spencer Damon put it simply: “When the flowers are really pretty, the effect is really short lived.”

That does mean much of the harvest won’t make the Grade A cut. About 20-30 percent of the crop will be sold as top tier flower, and the rest will be processed for extraction, Spencer Damon said. “When you walk into a dispensary, you have 100 different flowers on the shelf. The first thing that gets rid of 97% of the competition is just the aesthetics. Just based on how it looks.”

Dia Damon agreed. “Absolutely. Our flower market now is all crème de la crème. It has to be the best of the very best to be considered in a dispensary.”

On the Sunboldt Grown farm, Johnston said when she harvests depends both on the strain she’s growing and the terpene profile she is seeking. The 5 indicators she uses to harvest are: 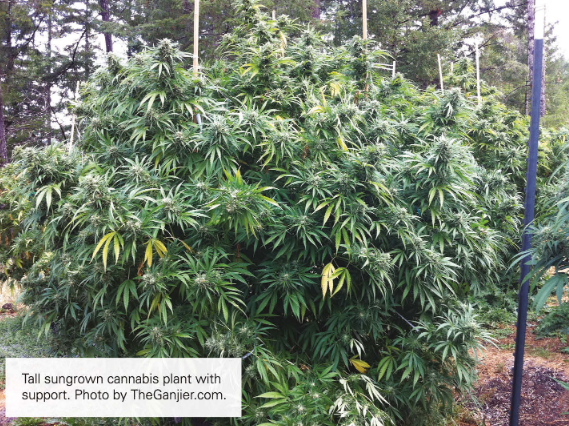 Sometimes a plant is harvested because of other factors. Jodrey said the weather is a major factor for whether a crop gets pulled early. “We typically get (rain) around September 20 every year in Humboldt, not a problem because it comes in and gives the plants a nice bath,” he said. “If we’ve selected our plants for outdoor cultivation, they will be patho-genetically resistant.”

Cannabis is vulnerable to molds, however, when in the 50-degree-Fahrenheit range and 70% humidity, Jodrey said. If more rain comes after September 20 in Humboldt, farmers risk mold and pathogens if they keep their plants out too long in such conditions, he said. 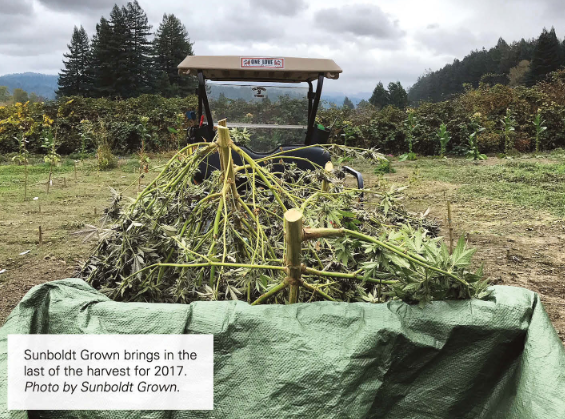 The other major factor he looks for is trichome coloration. Depending on the kind of cultivar, “I like to pull when I have 15-20% amber trichomes, 30-35% when it finishes ripening,” Jodrey said. Monoterpenes are diminished when taking the trichome past a certain percentage of complete, he added.

Once the flower is harvested in Humboldt, the job isn’t done, but an important milestone for the season has been reached. The farmers have been successful stewards of the plant through an entire season and their plants have given them a phenomenal crop. Pick up the next issue when we wrap up this series on how Humboldt grows with the final stage: Processing after harvest.