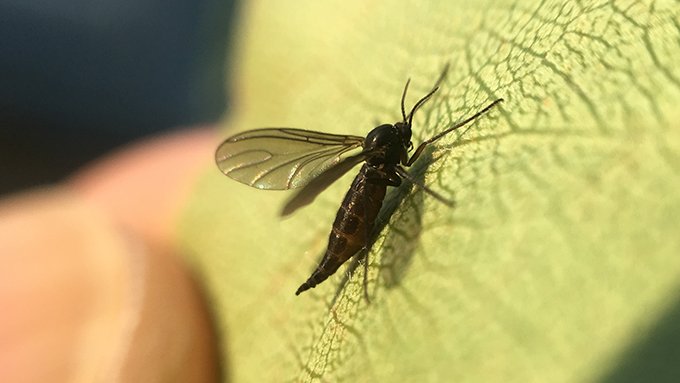 Fungus gnats look like tiny flies buzzing around cannabis plants, especially around the soil. Their larvae are slender whitish maggots, up to 6mm long, with black heads.

Their bodies are semi-transparent, and it is often possible to see the dark coloured gut contents. Adult fungus gnats are mostly 3-4mm long.

Fungus gnats (also known as “sciarid flies”) are black or greyish brown flies which look like tiny mosquitoes with dark wings.Despite their small size, fungus gnats can be a big nuisance in your soil cannabis grow, mostly because their tiny maggot/larvae offspring will hurt your plant’s roots (which will cause problems for your plants).Fungus gnats are a common problem for soil cannabis growers (especially those who overwater their plants!), but they’re actually easy to get rid of once you know what to do!

It is common for soil growers to overwater their cannabis plants, and wet soil is the perfect home for fungus and decaying organic matter. After fungus has grown (often invisible to the naked eye) or overwatered matter has begun to decay in the topsoil, fungus gnat lays their eggs in the top layer of wet soil.

Warm + wet topsoil = fungus gnats (and other problems or pests in soil).These eggs hatch into larvae that look like tiny maggots which only live in the top 2-3 inches (5-8 cm) of soil. The fungus gnat larvae are the culprits which cause damage to cannabis roots. 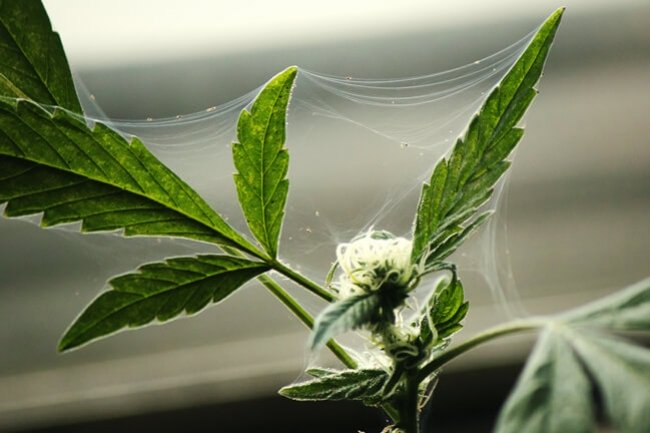 Cannabis roots are not the main source of food for fungus gnat larvae, but roots get caught in the crossfire. Although the main diet of fungus gnats is fungus and decaying matter, the larvae happily gnaw on root hairs and young tender roots of cannabis plants.The damage to the roots from these pest’s cause problems in the leaves and slowed growth.

If fungus gnats need fungus and decaying matter to survive, where is the fungus coming from? Fungus grows in wet conditions and is an essential part of the environment (where it breaks down organic matter like dead leaves). Fungus spores are around us everywhere pretty much all the time, but these spores will never start growing without moisture. Warm and wet conditions in the soil of a cannabis grow are what cause fungus to grow and matter to decay. Sometimes you won’t even be able to see the fungus or decaying matter with the naked eye. But once the conditions are right, fungus gnats thrive in the top layer of your soil whether you can see fungus or not.

Check to Make Sure You Have Fungus Gnats

1.) Tiny flying black bugs around your plants & crawling on your soil. Even if your plant or leaves aren’t showing symptoms or distress yet, if you see fungus gnats it means that you have a problem with fungus and moisture in your soil. Don’t let the infestation get out of hand.

It’s always recommended to get rid of any pests in the grow room as soon as you know they’re there!The adult fungus gnat flies are just annoying; they don’t bite you and don’t do much to hurt your plants directly besides spreading disease. But even though the mature fungus gnats aren’t a huge threat to your plants, the presence of adult gnats lets you know that your cannabis soil has been infested with their maggot offspring which causes the real problems.

2.) Tiny white or translucent larvae with black heads in the soil

How Fungus Gnat Larvae Cause Damage to Cannabis Plants

Larvae attack tender new plant roots and root hairs, which cause these problems:

• “Damping off” – seeds or seedlings are weak for no apparent reason; sometimes stems weaken and seedlings can even just fall over and die.

• If the fungus gnat infestation gets out of hand, even adult cannabis plants start looking unhealthy, showing many symptoms such as wilting, yellowing, drooping, spots.

• Cannabis leaves may show signs of nutrient deficiency (or deficiencies) which seem to be unrelated to pH, nutrients, or any other identifiable nutrient problem.

• Plants will start growing slowly and may even stop growing altogether.

• If the infestation hits in the flowering stage, yields can be reduced.

Fruit flies will keep coming back if there’s ripe or rotting fruit to eat. If you’ve ever left a banana or other fruit on your counter too long, you’ve probably noticed how fruit flies seem to be able to appear out of thin air if there’s ripe fruit around.

Fruit flies can start buzzing around poorly composted soil which contains kitchen scraps, but otherwise, fruit flies are uncommon in the grow room unless there’s ripe/rotting fruit or other tasty bits for them to eat.

So, once you get rid of their food, the fruit flies will disappear. A fungus gnat infestation on your cannabis plants can cause all sorts of strange problems – often they look like overwatering, pH problems or nutrient deficiencies. The more fungus gnats you have, the more likely you’ll see damaged leaves and reduced growth rates.

Since fungus gnats are almost always caused by overwatering and too-wet topsoil conditions, some of these symptoms may actually be caused by too-wet soil. In any case, when you see fungus gnats, it means there’s a problem in your setup that needs to be addressed.Here’s some pictures of cannabis plants affected by a gnat infestation. Notice how the leaves don’t look healthy (there’s yellowing, spots, curling, etc). It’s almost impossible to tell that you have fungus gnats just by looking at the leaves of the plant because it can cause all sorts of different symptoms

Get Rid of Fungus Gnats Quickly:

3.) Don’t water your plants for a few days. You want to begin drying out the soil to kill as many larvae as you can before you apply a treatment (which will involve watering). Fungus gnat larvae need a warm, wet environment near the surface of your soil to grow. Even after you’ve gone through all these steps and believe fungus gnats are gone, make sure to avoid overwatering plants, as this is the most common reason growers get fungus gnats in the first place. Don’t do the next step until the top few inches of soil has dried out.

4.) Kill the Larvae in The SoilTreat top layer of soil with Neem oil (follow the directions and use a pressure sprayer/mister so it gets distributed evenly). Neem oil is safe to use up until a few days before harvest, though you want to avoid getting it on buds as it has an odd smell that can linger for a few days. Spray Neem oil anywhere you see fungus gnats, it should kill them almost instantly.

5.) Avoid overwatering your cannabis plants from now on. Never water your cannabis plants in soil until the top inch or two of soil has dried out. From now on, you don’t want to ever let the top part of soil stay wet to create a breeding ground for fungus and fungus gnats. How often do I water my cannabis plants? Until the fungus gnats are gone, let your plant dry out a lot more than normal between waterings, and then you can go back to a normal watering schedule.

6.) Keep your sticky yellow cards up until Fungus Gnats are completely gone. These yellow sticky cards will continue killing adult gnats. They’re also helpful because they will alert you to whether fungus gnat numbers are rising or falling. Even after killing all the larvae, it may take a few days to a few weeks before the adult fungus gnats are completely gone, and you stop seeing new gnats caught on your sticky cards.