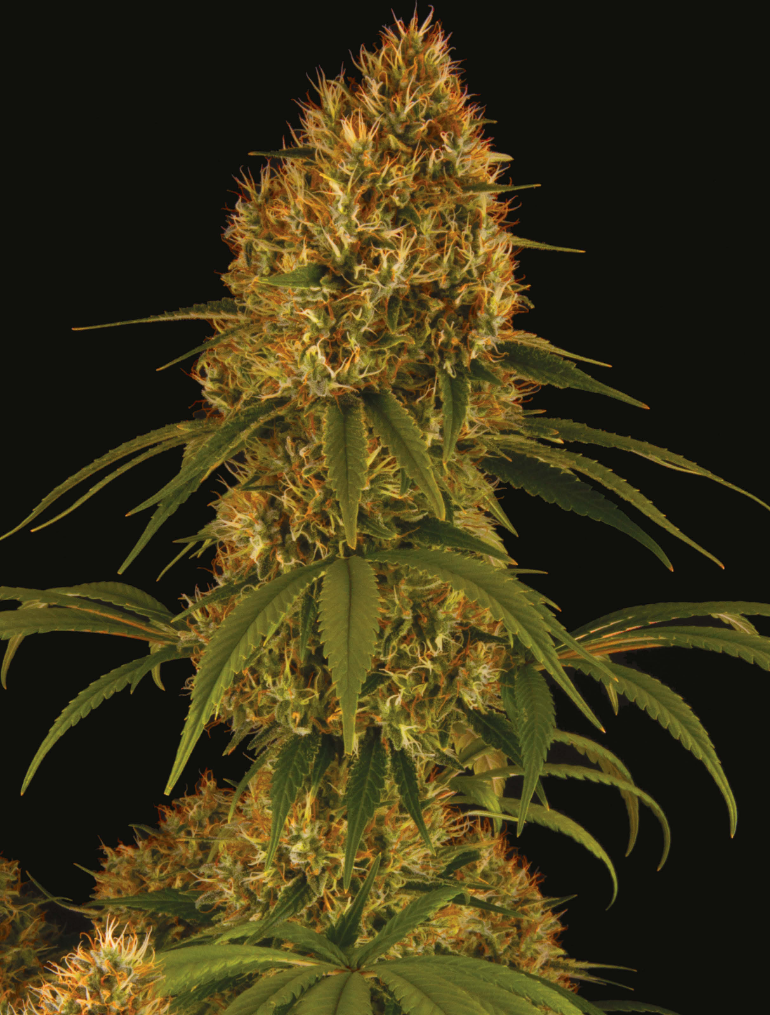 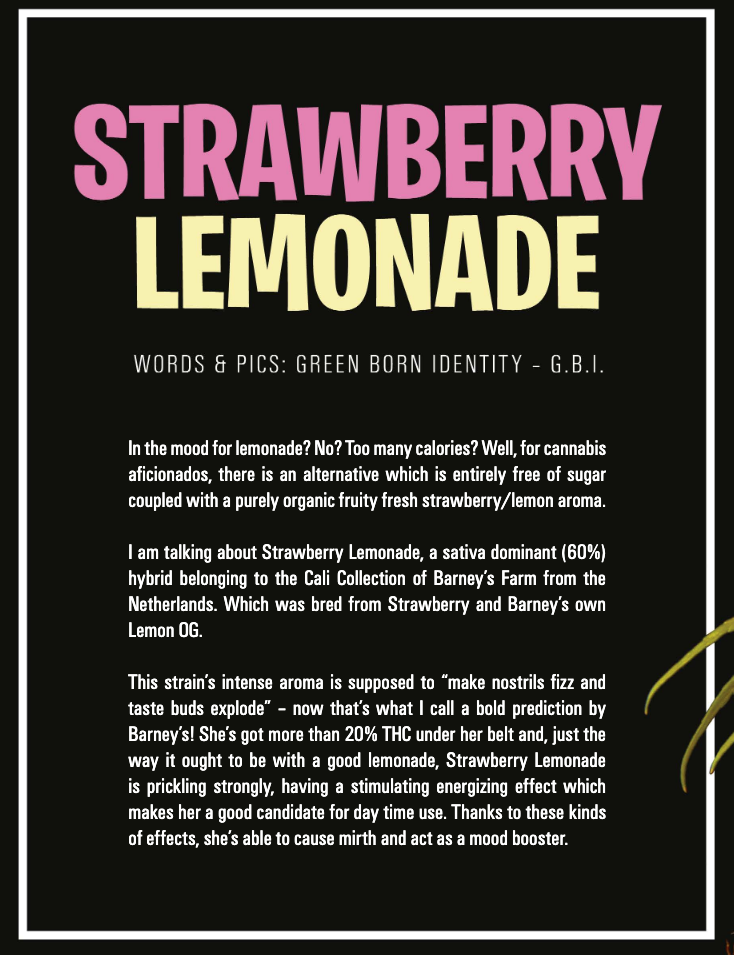 But Strawberry Lemonade not only boasts a bodacious aroma and effect, her grow characteristics read pretty excellent as well – after a flowering period of 60-70 days, growers can look forward to a maximum indoor harvest of up to 700g/m2. Out in the open, she has proven to be a great performer, too, producing yields of up to 2.5 kilos per plant.

Another good aspect here, Strawberry Lemonade comes with a strong mold resistance (5/5 on Barney’s rating scale) and has quite an early finishing (1st-2nd week of October), so that all helps keep the risk of mold infestation low. Spider mites don’t have it easy with this variety either as her resistance against these suckers is rated at 4/5.

Strong Vigour In The Veggie Stage

Making no secret of her sativa-dominant genes, Strawberry Lemonade grows quite tall, not infrequently reaching heights of 120-150cm indoors. Nevertheless, Barney’s rates its grow difficulty at 2/5, regarding it as a fairly uncomplicated strain.

Which came right on cue for The Doc, because more indica-dominant strains are flooding the market than ever before, and he as a user likes to also have weed in his stash with a stimulative freshening effect, as a counterpart or antidote to all those sedative indicas. “Okay let’s go for it!”, he rejoiced when he spotted this Barney’s Farm strain.

Straightaway he got himself some seeds, two of which found themselves in Jiffy pots on the very same day. After a quick and smooth germination process, the two seedlings soon picked up growth speed. In quick succession, one pair of leaves after another evolved, so the young plants displayed a strong vigor. Leaves were dark green and quite slender. Side shoot development started early, too.

The Doc noticed that the side shoots were growing unusually straight upwards, not expanding as is usual. Also this fifth Barney’s strain tested by The Doc showed a great deal of uniformity – when he switched them into flowering after three weeks of vegetative growth, his two Strawberry Lemonades were 38 and 40 cm, quite tall at this point already, by his standards.

When in the flowering stage a very dynamic branch elongation set in, that vertically oriented side shoot growth continued. The main stem stretched out even stronger than the side shoots, leaving their tips way behind and towering steeply up from the centre. And soon it adorned itself with a tremendously big head bud! Reported The Doc after nine weeks of flowering, “in the middle, a true monster of a top cola has taken shape, what a large-dimensioned humdinger it is! The flower structure is likewise fantastic, consisting of countless densely packed calyxes surrounded by only a few sugar leaves.

The whole thing is heavily frosted with resin glands – it’s one massive sparkling promise of sativa quality of the highest order, I’m totally blown away by that view! Their head buds aren’t the only reason to be wowed by these plants though, the same happens when looking at their 14 side tops each of stately size which are some real eye candy. Boy, this harvest will be a rich one! I guess in a week or so the plants will have fully matured.

Another stunning feature of these plants, indeed, is their aroma. Barney’s was so damn right in speaking that glowingly about it: the flowers are really smelling remarkably strongly of lemon and, secondarily, also strawberry, it’s an exciting, deliciously fruity fragrance blend I hadn’t encountered before. Super curious what the taste will be like!”

Weighing leads to a bombshell result, strawberry lemonade proved to be a bumper yielder

The Doc kept his two Strawberry Lemonades flowering for 70 days, then harvest time had come, precisely at the very end of the official maturity window. To heights of 109 and 117 cm the two plants had eventually grown, having increased their heights at the end of the veggie stage almost threefold.

Thanks to the buds` low leaf count, he waltzed through harvest work, swiftly trimming those numerous buds and placing them into his drying net. When it was weighing time a few weeks later, the scales needle went to sensational 272 grams. Cheered The Doc, “wicked! 136 grams per plant! A real bombshell result, Strawberry Lemonade has proven to be a hefty bumper yielder.”

In one’s mouth, body and brain, on the skin: this king of lemonade prickles everywhere!

When test-vaporizing the strain was due, The Doc felt groggy and tired after a laborious working day, but had to do some housework also. “So I hoped that Strawberry Lemonade could be of help here, serving as an activity booster”, he said.

After he had opened one of his storage jars filled with Strawberry Lemonade buds, he got enveloped by a stupendously lemony waft of scent that was strongly reminiscent of those lemon-flavored calcium fizzy tablets he uses sometimes – not only sour but also sweetish as that hint of strawberry was still present as well. And then he sensed it when he inhaled a first vapor cloud off his Mighty vaporizer, the incredibly lemon-like weed taste of Strawberry Lemonade.

“It was a strong prickling sensation on my taste buds, rarely before had such a fruity marijuana flavor appeared in my mouth, this stuff could almost pass off as a mouth refresher! But just like the smell, it’s not only sourly lemony, but also somewhat sweetish”, The Doc said as he described his flavor experience. While the first puff had an instantly eye-opening, view sharpening effect, the second and third almost gave him a goose bump feeling, just like previously in his mouth, there now was a tingling sensation inside his body and on the skin.

He felt his organism aroused to activity and his heart beat accelerated which made him leap from his chair in an agile manner and get to work – he had to do the dishes, an actually boring bothersome sort of work, but additionally driven by some peppy house music, it was almost fun.

The Doc was in high spirits and sublime mood, after having done the dishes, he even danced to the music for a while. When this strongly invigorating effect ebbed away after about an hour, he enthused “this was first-class sativa fuel that managed to kind of jump-start me!” What followed was a phase of relaxation and winding down.

Summing up his test experience, The Doc said, “good, better, Strawberry Lemonade! This super sativa has enthralled me all the way, it achieved highest marks in every category and really is a fabulous plant. Which has catapulted itself into my personal sativa top ten, if not even top five – and that undoubtedly means a lot after four decades of home growing!” 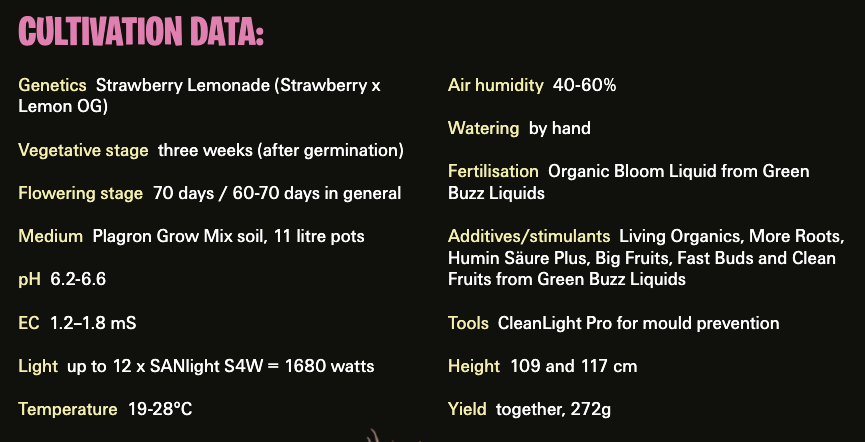