Why CBD and Yoga are a Match Made in Heaven, By Bethan Bee Rose 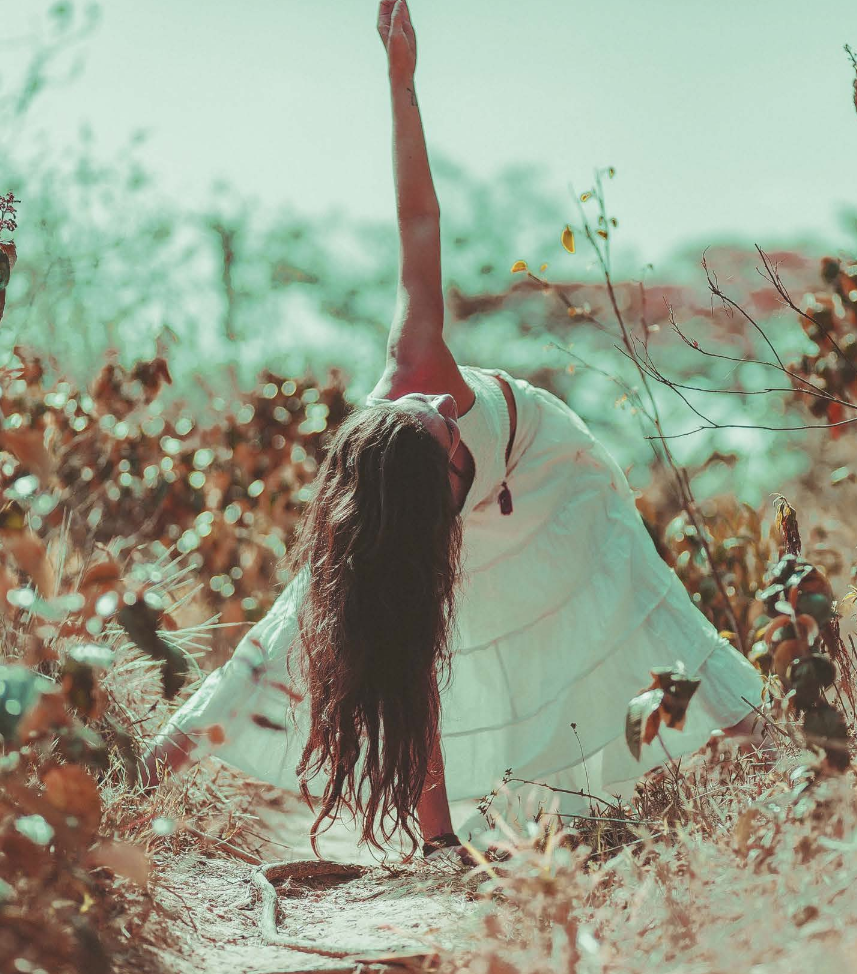 Are you ready to crank the “Zen” in your life up a notch? If so, a CBD-inspired yoga routine could be just what you need. CBD – or ‘cannabidiol’ as it is known in the world of science – is a naturally-occurring derivative of the cannabis plant.

Found in copious amounts in the non-psychoactive hemp strain, CBD will not get you “high” as such, but it could potentially assist you in ascending to higher realms of consciousness and overall well being

While this versatile cannabinoid is commonly known for its anti-epileptic, anti-insomnia and analgesic qualities, CBD is also emerging as a wonderful complement to yoga. This ancient spiritual practice is enjoyed by some 300 million people around the world; of this amount, an estimated 460,000 “yogis” are rolling out their mats in the United Kingdom.

Both CBD and yoga constitute ever-growing segments of the U.K. retail sector. By the year 2025, CBD is estimated to become a £1 billion industry in Great Britain. The yoga market, on the other hand, was valued in excess of £875 million in 2018; inflating 2.1% from the previous year. Put the two together and you’ve got something really special.

How can yoga enhance a person’s daily life?

Some 5,000 years ago, yoga sprouted out of a Northern Indian region; it was believed to have originated amidst the rise of the Indus-Sarasvati civilization. The mindful practice focuses on the balancing of the human body’s energy centers (Chakras). It involves breathwork (pranayama) and postures (Asana) that soothe the mind, body and soul. Interestingly, cannabis and yoga may have had some association way back when the spiritual art first manifested in ancient India.

How, you ask? Well, in the sacred Hindu spiritual texts known as “The Vedas,” cannabis is referred to as being one of the five sacred plants; according to the sacred text, the leaves of cannabis plants symbolize guardian angels. Also known as “Rig Veda”, The Vedas was the first to officially mention the practice of yoga. Included in the collection of texts are a profusion of songs, mantras and rituals; commonly used by Vedic priests known as Brahmans.

The ancient texts spotlight the cannabis plant as an abundant source of happiness. The Vedas claimed that cannabis was put on Earth specifically for human consumption; to provide humans with feelings of joy, elation and freedom from anything that might hold them back, such as fear, sadness or worry. Considering the fact that the Sanskrit word “yoga” translates to “unite” or “to be made whole,” it seems that cannabis and yoga go hand-in-hand. Combining the two – in the form of CBD yoga – could effectively ease the mind and enable you to tap into a never-ending source of personal potential.

Why is the CBD yoga trend catching on?

When you consider the fact that yoga offers a way to boost flexibility, strengthen the immune system and restore imbalances in the body, it makes sense that CBD would be the perfect partner for this practice. Factually, CBD has been proven to offer similar effects to those produced by yogic breathing techniques and poses.

Let’s take a look at some of the rewards you could reap if you combine CBD with regular yoga sessions:

We all have seven chakras that sit in different areas of the spinal column; the root chakra, the sacral chakra, the solar plexus chakra, the heart chakra, the throat chakra, the third eye chakra and lastly the crown chakra. When these circular vortexes of energy are not aligned, imbalances or blockages in your body’s natural flow of energy will occur. This means that you may endure mood swings, negative thoughts, anxiety and feelings of hopelessness. Yoga is an excellent way to balance your chakras and, when practiced with CBD, you can increase the chances of opening your crown chakra. As a natural anxiolytic, CBD can instill feelings of calm and potentially aid you in your meditative yoga sessions. After all, you need to be calm in order to meditate and unblock these all-important swirling wheels of energy!

Dealing with the stresses of daily life can take a toll on your mental health if you’re not careful. Fear not, because by ingesting some CBD before yoga workouts, you can ease the mind and learn to take control of your thoughts. Want the proof? A study published in the journal Complementary Therapies in Medicine revealed that “stress, anxiety and quality of life scores improved” among individuals who attended weekly healthy yoga sessions. In regards to using CBD for a clear mind, a 2010 study discovered that anxiety levels reduced significantly in patients who received an oral dose of CBD. What’s more, study subjects reported improvement in emotions, motivation, self-control and setting achievable goals after using CBD.

Get a Leaner Body – You may have noticed that most yogis have a lean physique. This is because many yoga poses involve stretching the limbs and holding particular poses for a certain period of time. Ultimately, this results in more toned muscles and lower body fat percentage; combined with a healthy diet. Add CBD to the mix and you’ll be sculpting your body in no time. Research has proven that this cannabinoid is a natural anti-catabolic, meaning that it can reduce muscle mass breakdown and simplify the process of building more muscle.

Establish a Deeper Connection – Whether you choose to use CBD before, during or after yoga session, this cannabinoid’s soothing and calming effects may aid you in establishing a deeper connection with the “divine”. The non-psychotropic cannabinoid is favored for its ability to improve focus and concentration; two essential qualities for any yogi. CBD has even been studied for its efficacy at relieving the symptoms of attention-deficit hyperactivity disorder, suggesting that it could help you to focus and connect with the energies of the universe through yoga.

An intricate network of receptors can be found scattered around the human body; known as the endocannabinoid system (ECS). The ECS is responsible for regulating the body’s physiological processes. When it is out-of-sync, you may endure problems with the digestive system, nervous system and brain. Not to worry, because CBD has got your back. When consumed before practicing mindfulness with yoga, you’re guaranteed to feel brand new!

When CBD enters the body, it indirectly reacts with and triggers receptors inside the ECS; including receptors associated with pain and inflammation. With that being said, your body should feel more supple if you master the top yoga poses – like the Downward Dog (Adho Mukha Svanasana), Cat/Cow: (Marjaryasana/Bitilasana) and Knees-to-Chest (Apasana) – in combination with CBD.

In the 33 U.S. states that have legalized medical cannabis, a vast proportion of registered patients are relying on CBD to relieve aches, pains and various other ailments. A study published the British Journal of Pharmacology in 2013 demonstrated the efficacy of CBD in reducing neuropathic pain among cancer patients. A separate study published in the journal Frontiers in Pharmacology in 2018 indicated that the cannabinoid possesses neuroprotective qualities. The findings of these studies – among many others – tell us that the CBD’s properties may prove useful for individuals who want to practice yoga, but suffer from a pre-existing condition.

Did you know that chemical imbalances are often the root cause of mental health disorders, like anxiety and depression? The main goal of the ECS is to promote homeostasis and when this is disturbed, chemical imbalances may arise. On the plus side, the ECS – also known as the ‘Endogenous Cannabinoid System’ – works incredibly well with CBD at regulating neurotransmitters throughout the body; thus allowing you to fully release any negative feelings and energies ahead of your yoga session.

Some of the more advanced yoga poses – such as Prasarita Padottanasana (wide stance forward bend), Supta Virasana (reclining hero) and Parivritta Trikonasana (reverse triangle) – may result in torn or overstretched muscles. The great thing about using CBD for yoga is that the cannabis-derived chemical could speed up the healing process, since the cannabinoid is a natural anti-inflammatory.

How much CBD should I take when practicing yoga?

What suffices as a suitable dosage for one person may not necessarily satisfy another. You don’t have to be a scientist to understand that we are all unique; not just personality-wise but also, deep within our biochemistry. Numerous factors tend to play a role in CBD’s effects, including genetics, age, weight, gender and tolerance to the cannabinoid. On that note, it’s not feasible to expect a ‘one-size-fits-all’ approach when it comes to using CBD for yoga. While it may be a case of trial-and-error to fully determine what dosage works for you, the best advice for first-time consumers is to “start low and go slow”; a slogan that many CBD suppliers use to inform their customers.

Use CBD oil regularly or daily for the best results. Simply drop some oil onto/under your tongue using a tincture and meditate – inhaling and exhaling deeply – for five minutes. You may also want to keep a journal and note down how you feel after consuming a specific dosage; refer to the journal as a means of figuring out what works specifically for you. Beginners are advised to consume 5-20 milligrams, whereas individuals who crave a deeper state of relaxation should opt for a 30-60 mg portion size of CBD. When in doubt, consult with your healthcare physician or doctor before using CBD and/or other supplements.

Should I be cautious about using CBD for yoga?

Since the evidence to prove CBD’s safety and efficacy as a yoga supplement is scarce, it’s important that you practice caution when buying CBD. Always seek out reputable and licensed sellers who conduct lab testing on all of their products; request to see a Certificate of Analysis (COA) or third-party lab test results.

Pregnant women who are hoping to amplify the results of their prenatal yoga practice ought to steer clear of CBD products until scientists learn more about them. Currently, scientists are unaware of the way(s) in which CBD reacts with pregnancy hormones; the same applies for breastfeeding females.

Individuals who are required to undergo drug testing for their job may also want to avoid using CBD for yoga; when derived from cannabis, CBD may still contain traces of the psychoactive compound THC (tetrahydrocannabinol). On the other hand, hemp-derived CBD usually contains less than 0.3% THC and therefore would be the safer option.

A final consideration for first-time CBD consumers relates to the use of alternative substances and medications; the cannabinoid acts as a blood thinner and could potentially intensify the effects of anti-anxiety drugs and or anti-depression medications.