Big Kush, Potent, Fat, send you to the mat: The Kush Monster-Yielder – A Dinafem Strain Story – By G.B.I. 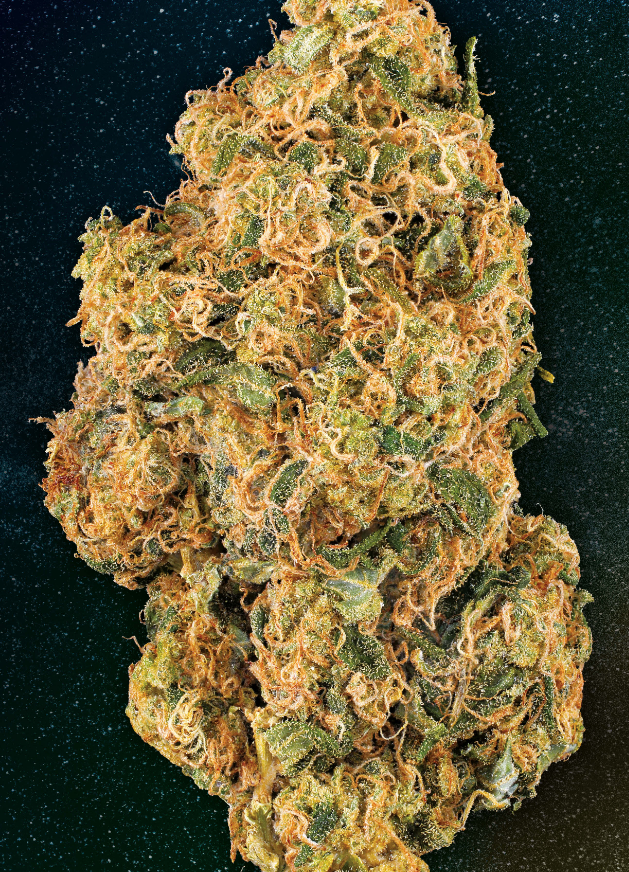 Hardly any strain other than OG Kush in recent years has enthused marijuana fans all around the globe. The hype around this devastatingly potent strain naturally started where it was bred – in the USA – but from there set out to conquer the whole world.

And didn’t stop at the borders of Spain, where the breeders of Dinafem managed to get their hands on the original genetics. Which is one of the strengths of the Spanish market leader – they don’t settle for self-made copies or even false labeling, but thanks to excellent worldwide networking are able to track down the source and obtain authentic genetics from the original breeder.

But there’s a catch with OG Kush in that she yields fairly low volumes compared to high-performance strains. A disadvantage that is down to a natural law though: marvelous quality most rarely goes along with vast quantity. So, striving to make OG Kush a high-yielding Kush hybrid, the Dinafem breeders thought, “What would be more obvious than crossing it with the famous bumper crop strain Critical+ (Big Bud x Skunk #1)?” No sooner said than done – the new mighty Big Kush (50% Indica / 50% sativa) arose from marrying Critical+ to O.G. Kush.

In addition to the yield shortcoming, another drawback of OG Kush was cured: she tends to grow short with none-too-strong side branches. Big Kush, however, thanks to the Critical+ factor has a solid expanding stature characterized by long side branches with an open structure that, viewed from above, look like a cross. Her Critical+ heritage also incites Big Kush to produce buds in vast amounts which are big and dense, blessed with a high calyx-to-leaf ratio and richly coated in resin. After a flowering time of 55-60 days, indoor growers can look forward to yields of up to 600g/m2. Packed with lots of limonene, the dry buds wow smokers with their complex citrus zest smell and taste which wonderfully blends notes of lemon, fuel and pepper. As typical of Kush varieties, a hint of pine may also be part of the mix. Fueled by a high THC count of 20% (CBD: 0.1%), Big Kush’s effect hits home, starting with a stimulating head buzz that soon changes into a long-lasting hefty stonedness bringing deep relaxation to the body and mind, which makes her a perfect choice for medical users also.

Big Kush responds very well outdoors, too, particularly in a warm and sunny environment. Due to her early finish under natural light though – end of September to early October – she performs well not only in Mediterranean, but also more moderate climates, because her buds will be ripe before autumn with all its dangers fully sets in. Outdoors or in a greenhouse, heights of up to three meters and yields of 600-900g per plant are possible.The Doc, always fi red up for top-notch Kush strains, was very eager to check Big Kush’s quality out. So he sowed two feminized seeds and, displaying the usual high Dinafem germination quality, they sprouted quickly and healthily, with the seedlings’ heads popped out of the ground after about 2.5 days. Right after those initial three-fingered leaves had emerged, the first set of lateral shoots became apparent, announcing profuse side branching.

And really, when The Doc induced the two plants to flower two weeks after germination, they looked like small compact bushes, grown to a height of 19 and 21 cm at that point. During the first weeks of flowering, they exhibited enormous stretch potential and rocketed upwards. At the same time though, also lateral growth continued with undiminished vigor, and indeed, looking down on one of the plants, The Doc soon witnessed that cross-shaped appearance with an open growth structure. Driven by a revved-up budding engine, super-dense and super-hairy flower clusters bulged out of this plant’s numerous branches, impressively showcasing its Critical+ genes.

The second plant didn’t grow that much horizontally and revealed even stronger vertical stretching instead, still being robust and fairly compact in the end, however. It also kind of exploded in the course of flowering, producing likewise dense chunky buds of formidable size the structure of which was almost identical to the first plant’s, with the only difference being a slightly higher leaf share.

The buds of both plants also attracted The Doc with an opulent trichome frost that also extended to bigger leaves sticking out of the buds – no wonder that their zesty lemony fragrance had gained tremendous strength at the end of the flowering stage. They took a little bit longer than officially stated, after 63 days The Doc decided that it was about time to chop down his two fully mature Big Kush plants. The one he called “the cross” had grown to a height of 74 cm, while the other, a bit more elongated plant had stopped at 88 cm. Both plants sported amazingly massive central colas, surrounded by a multitude of thick succulent side tops. Said The Doc, “Big Kush was truly rocking the flower show, it’s simply brilliant how this strain combines the abundant productivity of Critical+ with an exquisite, very complex lemony Kush flavor.

I’ve been lucky to witness the living Big Kush buds smelling like a fancy blend of lemon, fuel and pepper – thus captivating my Kush loving heart with ease. And the buds are as rock-hard as the Mount Everest, I am sure one can shatter windows with these, hahaha! No doubt at least that the dry yield will be terrifi c…”When The Doc put his dried Big Kush buds on the scales some weeks later, his forecast proved to be spot-on.

“Both plants have easily passed beyond the 100g mark, their tremendous buds added up to a stunning total 268 grams, more than generously filling my harvest basket. Which is all the more remarkable given that they had a veggie time of only two weeks! However, one has to keep in mind that my plants always receive light in abundance, my setup with twelve SANlight S4W LEDs is one hell of a blazing artificial sun, far above average.

”An insane cloud of heavy aroma wafted to his nose when The Doc crushed a bit of Big Kush marijuana in his grinder, to prepare his first test joint: “It’s a fascinating three-phase smell: At first I sensed a strong touch of lemon, but then I felt my olfactory moved to a petrol station, from where I marched right into a conifer forest full of fragrant pines.” Even more intriguing was the fact that this unique succession of flavors was pretty much the same when The Doc tasted Big Kush, that three-phase smell was precisely translated into a three-phase taste, happily enjoyed by The Doc.

And whilst savoring the intense aftertaste of the first toke, he noticed that the THC started to work, flooding his neurons. A slight prickling surrounded his visually stimulated eyes, his view seemed to sharpen under the influence of Big Kush while his inner sun started to shine, putting him into good mood. But just as expected, this initially stimulating kind of effect soon gave way to the dominant sedative powers of this strain – after about a quarter-hour, he felt a mighty indica freight train sweeping towards him. He had to take a seat as it was about to floor him, his eyes became glazed and locked upon some distant vision while his muscle tone decreased and his limbs slackened. Yes, there it was again, that deeply relaxed “spaghetti” feeling The Doc likes so much.

Also because his brain felt like wadded-up cotton, full of numbing happiness, giving him a blissful smile. That feeling of being tremendously stoned lasted almost two hours, leaving an enthused Dockie behind: “Potent, fat, sends you to the mat – Big Kush rules! She’s a true Kush monster yielder with a complex oh-so-lovely flavor and an extremely powerful two-phase turn that hits home hard. Undoubtedly, once again, a fantastic breeding job done by Dinafem!” 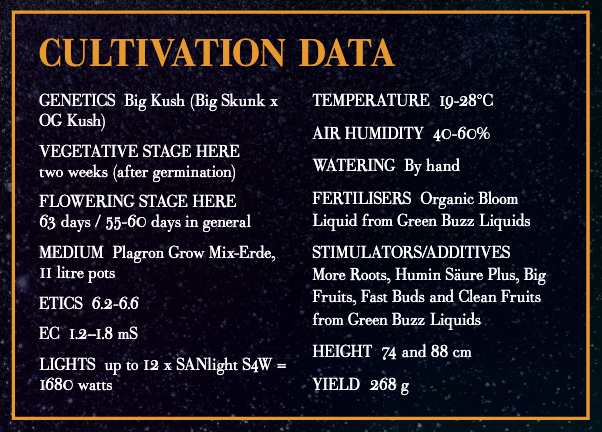