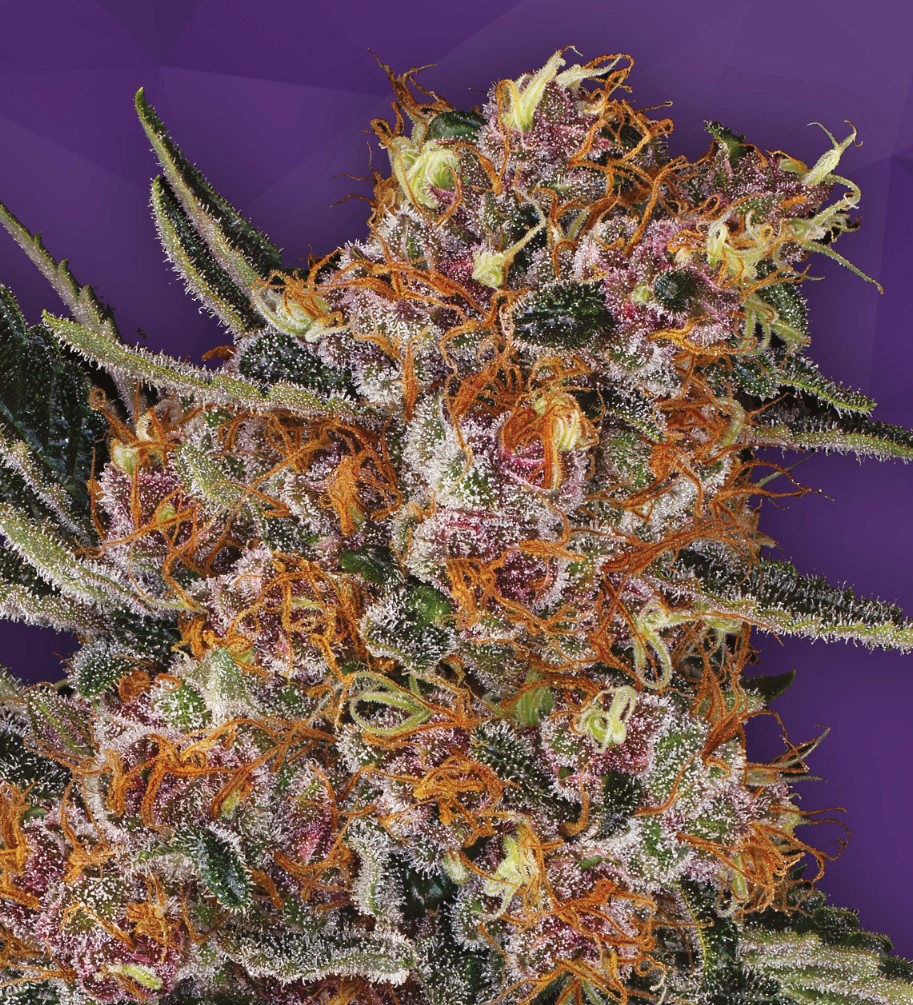 There are only a very few cannabis strains that have buds which go purple when grown in indoor rooms with regular warm temperatures. That’s why this highly attractive strain is quite a rare case to behold indoors.

Few growers are willing to lower the night temperatures signifi cantly – below the optimum – to enable their plants to produce the purple pigment anthocyanin in large amounts, and who can blame them?

The anthocyanin acts as a kind of anti-cold and anti-freezing agent for the plants. But there’s a handful of strains with a special genetic make-up that allows for ample generation of anthocyanin with regular indoor cultivation temperatures. Such a strain is Purple Punch from Barney’s Farm, which owes its purple flower garment to its noble mother Granddaddy Purple, a very popular Californian cross of Purple Urkle and Big Bud released in the year of 2003. The father, Larry OG, as powerful as he is famous, originated in California, too, so Purple Punch, the elite offspring of these two, is another case of top-shelf West Coast genetics from California.

The basic data of this 90% indica variety sounds equally promising: it requires merely 50-60 flowering days to create opulent indoor yields of up to 600-700 g/m2. The bushy, multi-branch plants exude resin in vast amounts and grow to a medium height indoors, up to 90 cm. Purple Punch is highly suitable for outdoor cultivation as well, fi nishing in the second to third week of September under natural light and being equipped with a strong resilience against all kinds of mold. 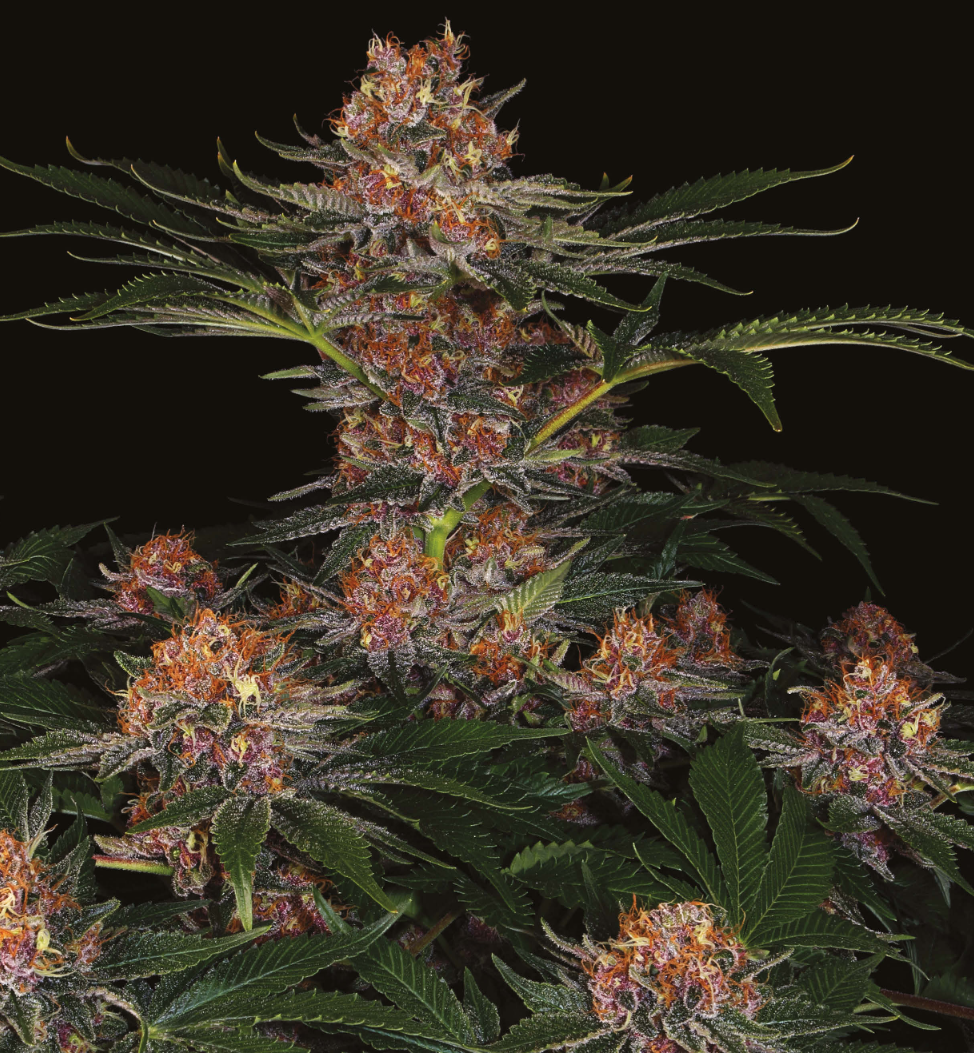 Fabulous yields of up to 2 kg per plant are accomplishable outdoors given an optimum environment, with the plants not becoming taller than 1.5 meters! Whether indoors or outdoors, Barney’s describes Purple Punch as an easy-to-grow plant and rates its difficulty level at 1 on a scale to 5. It’s also remarkable in terms of potency – the flowers of this variety have been measured at 25% THC. The effect corresponds to the 90/10 indica dominance, depending on dosage ranging from relaxing and stress-combatting to heavily sedative or narcotic. Aroma-wise, Barney’s comes up with something super exquisite: Purple Punch is supposed to smell and taste of “baked apple pie with cloves glazed with caramelized blueberry and cherries” – now if that doesn’t stimulate your senses nothing will!

Indeed, it stimulated The Doc’s imagination a lot, he instantly fancied growing Purple Punch once he had read the description. He definitely was in a purple mood when he got himself a pack of feminized seeds.

The two seeds were sown quickly germinated without any problems, and after two weeks of growth, The Doc wrote into his grow diary: “Just as expected, they’re growing markedly indica-like, with wide leaves and short internodes.” Due to their 90/10 indica dominance, he gave his two Purple Punches five weeks in veg, an extra-long period. At the end of this period, he reported:“I’ve moved them into flowering now. They’re still displaying a shrub structure, looking like 100% indica even. With heights of 40-45 cm, very homogeneous!”

The two plants swiftly transitioned into flowering once the light was switched to 12/12, it took them only six days to display their first female preflowers. What followed was the start of an industrious mission to build buds – after just three weeks into flowering, there were tightly packed white-haired flower clusters everywhere. The branch elongation effect was quite restrained so the plants kept their dense compact shape. After four weeks of flowering, the Doc noted: “They’re making fast progress, still with a high degree of uniformity. The buds are noticeably becoming thicker, with their calyxes – hooray! – having begun to turn purple. So much to my delight, Purple Punch lives up to its name. But there’s another reason to cheer, it’s absolutely astounding how heavy the resin production is at that early stage, those purple calyxes are already covered with loads of trichomes, it seems as if they’d explode with resin soon…”

At the end of week six, The Doc continued his report: “I’m pretty stoked about these dense chubby buds with an intense purple coloring and resin glands in great profusion – what a lovely view! As early as now, the buds are looking that fat and hyper resinous that many an untrained eye could be tempted to already harvest them.

But they certainly need one or two more weeks. Their fragrance doesn’t fall behind their fantastic looks either – indeed, it’s as unusual as it’s exquisite. Whilst, as a matter of course, I cannot precisely detect all those highly specific characteristics depicted by Barney’s, the aroma goes in that general direction: it’s really reminiscent of some pastry fresh out of the oven, a very sweet, almost caramel-like odor with a fruity hint that may be interpreted as apple. But there’s another secondary aspect – a note of lavender, as if an apple cake was garnished with a few lavender flowers.”

When the eighth week of flowering was over – very much on time – the two Purple Punches were fully ripe so The Doc could harvest them, commenting: “They’ve evolved into true resin factories, with even the upper fan leaves so widely encrusted in crystals it makes Purple Punch look like a ‘white strain’, a white strain though with a purple heart, sooo gorgeous! And they’ve remained pretty uniform until the very end.

” Weighing the dry buds a few weeks later turned out to be another highlight since they weighed in at 83 and 86 grams – given the final plants heights of only 59 and 64 cm, that was really something!Luckily, the Purple Punch nuggets had kept their violet coloring through the drying process which made them a fancy eye-catcher the visual fascination of which was increased by its thick-layered “bling-bling” resin carpet. Also, the pastry characteristics of the aroma had been preserved including its apple and lavender undertones, now even sweeter and smoother due to the absence of chlorophyll and slight fermentation.

He went with an almost festive feeling to grind his first Purple Punch bud – excited about exploring the psychoactive aspects of this variety. He loaded his “Mighty” vaporizer and deeply inhaled a big first vapor cloud which he kept it in his lungs for a very long time. Three more clouds followed, and then it came rolling by, a huge hunk of an indica stone! “It ironed me completely flat,” chuckled The Doc.“My whole body became as squashy as Jell-O, the tensions in my back were soon gone, giving way to a warm feeling of deep relaxation.

The same happened in my head which down-shifted into the gear of maximum relief, it was that buttery soft feeling again of total serenity and bliss.” For others, it might have been a case of a heavy feeling and soon-falling-into-sleep, but the hard-boiled old stoner The Doc just felt wonderfully space-out and stayed awake, possibly also thanks to the fact he had taken an afternoon nap. With a broad grin, he reported:“I thought, hey, Purple Punch is in my brain, so I’ve got a purple brain now so to say”which made me think of Prince’s song ‘Purple Rain’… so with this melody, I started to sing ‘Purple Brain’.

The Doc also sang a hymn of praise then in conclusion: “Purple Punch truly is another smasher from Barney’s Farm. A purple color wonder with ample yields, resin glands in abundance, an exquisite gourmet flavor and a mighty indica stone – gets an extra big like from me!” 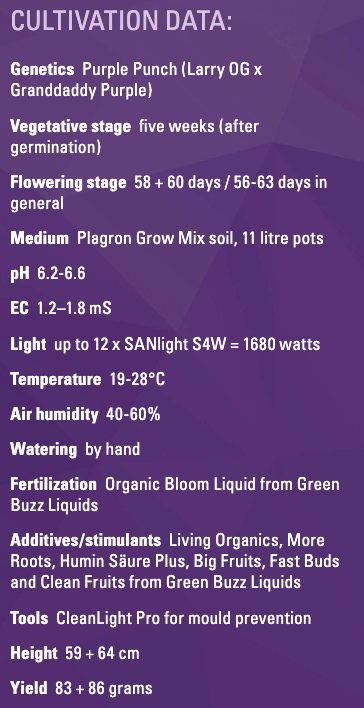