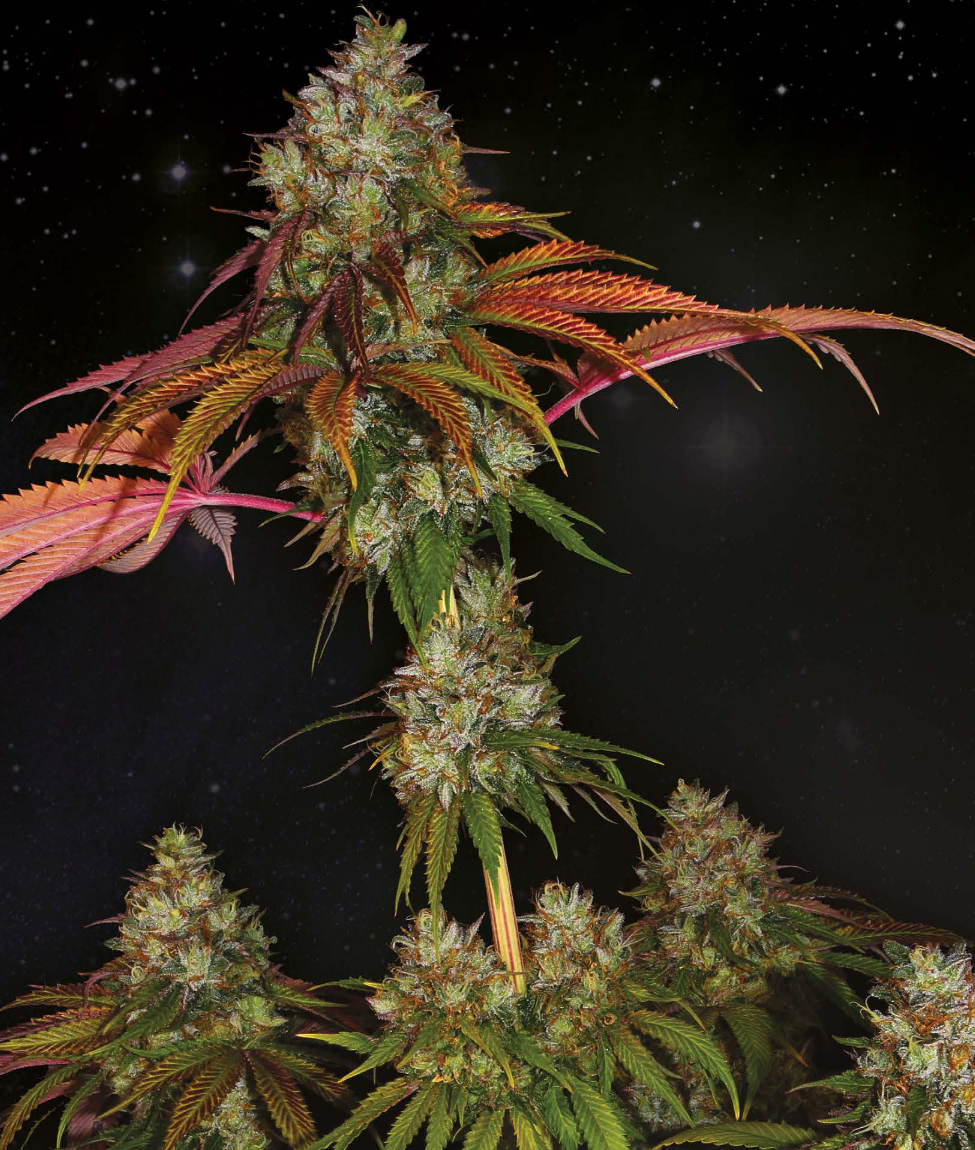 AN INDICA SHOOTING STAR WITH EVERY TRICK IN THE BOOK

It’s highly remarkable nowadays when a new strain manages to catapult itself into the world’s cannabis elite almost overnight and win one cannabis cup after another. After all, competition is huge, with new strains popping out of the ground like mushrooms. A new release by Dinafem has pulled off this feat in the year of 2017: Remo Chemo.

Put on the market in autumn, this indica-dominant (65%) variety came as a real bombshell, securing two first places at cannabis cups (Expogrow Cup and Karma Cup) in the very same year. Also, it was included in the prestigious “Top 10 Strains of 2017” list compiled by High Times magazine. Two more cup victories were to follow in 2018, at the Karma Cup again and at the Cannazores VI Cannabis Cup.

Remo Chemo undoubtfully boasts superb genetics, but another reason for its instant success certainly was to be found in the bonus of popularity it enjoyed right from the start, thanks to the high profile of Dinafem’s collaboration with Remo the “Urban Grower”, a renowned grower and you-tuber from Canada. It was Remo himself who created Remo Chemo as a regular seed strain several years ago by crossing Bubba Kush to UBC Chemo Kush.

The Dinafem breeders took on the task then to bring a selected Remo Chemo cutting into feminized seed form and make it available to the whole world. Both UBC Chemo Kush and Bubba Kush are true strain legends. UBC stands for “University of British Columbia” because legend has it that UBC Chemo Kush was bred by Dr. David Suzuki at this university in the early 1970s, in an attempt to develop a herbal medicine against the side-effects of cancer chemotherapy.

This mission was fully accomplished as that project yielded a plant with up to 29% THC and strong anti-nausea and painkilling effects. Somehow a range of Canadian breeders managed to get their hands on a clone of this plant later on. As for the other parent of Remo Chemo – probably needless to say much about Bubba Kush’s story of success here…Remo Chemo shares the outstanding medicinal properties of UBC Chemo Kush, with its THC content amounting up to 24% while containing only very little CBD, not more than 0.1%.

However, due its most powerful indica effect, the shooting star of 2017 is not only very popular with medical marijuana patients but also recreational users. Also because of its classic intense Kush flavor which blends earthy with oily and peppery notes that come through in both the nose and taste.

Appearance wise, Remo Chemo plants live up to their indica-dominant nature, exhibiting dense growth with dark green leaves which may turn reddish to purple during flowering, thus providing an additional attraction. Buds are roundish and compact, showered with tons of trichomes in the end. They need 65-70 days to develop and ripen, promising a harvest of up to 500g/m2. Given an optimum environment (Dinafem underlines the importance of plenty of light and low air humidity), with a height of merely up to 2.5 meters single plants are potentially capable of generating ample yields of up to one kilo. Maturity will be reached around mid-October under natural light, which in most European countries is early enough to avoid very cold temperatures, frequent rain falls and the consequential risk of mold infestation.

The Doc was fired up for this very trendy strain and put two feminized Remo Chemo beans into the starting blocks for a test run. He didn’t have to wait long for the seeds to germinate, as early as 2.5 days after sowing the seedlings raised their heads above the ground. The Doc scheduled five weeks of growth for the two plants. It soon turned out this was really needed as in the first 2-3 weeks they were growing at a leisurely pace, with very tight internodal spacing and hesitant side branching.

Then one plant started to set itself apart a bit from the other by displaying a stronger instinct to stretch vertically and horizontally. Both plants were characterized by indica’s typical dark green leaves. When the Doc triggered them into flowering by switching from 18/6 to 12/12, they had reached 31 and 41 cm tall. They showed a high readiness to flower, pushing out female preflowers so quickly – after five days – it was as if they had been wishfully waiting for that. After that they continued at that speed so that The Doc could almost watch the shoot tips morph into a knobbly rose bud shape.

Two and half weeks into flowering, lots of white pistils had emerged from the young buds. Another two weeks later, the two Remo Chemos were bestrewn with thick fuzzy white flower clusters. Amazingly, their calyxes and flower leaves were already displayed a glistening resin carpet at that early stage which caused The Doc to gladly expect a whole gush of resin to follow.

Well, it was just like that in the following weeks – trichomes poured out of the buds in plentiful amounts and made them appear as frosty silver white as an aster covered with hoarfrost in a cold early autumn morning. And the two plants also exhibited splendorous autumn colored leaves as they neared maturity.

Especially one specimen was a feast for the eyes with its yellow-red, red and purple shade and sugar leaves. The other one remained greener, but its sugar leaves were interwoven with dark purple hues, too.

The Doc loved this gaudy play of colors and said “what a vision of delight this combination of many varied colors and resin in abundance is! However, these plants are not only visually appealing, but also smell-wise… with their buds giving off a divine heavy Kush scent as strong as it can get.

It blends distinct notes of soil, coffee, gasoline and pepper into a true spice bomb which is even refined with a surprising note of lavender – simply fantastic!” The look of the buds was indica all the way, they became as chubby and dense as described by Dinafem, displaying a medium high calyx-to-leaf ratio.

In the end, the two Remo Chemos had stretched to heights of 61 and 78 cm, the more colorful one was the taller specimen. With 64 and 68 days of flowering, the two accomplished their flowering job absolutely on time. A few weeks later, he could fill big harvest jars with 67 and 80 grams which for him was fairly far from record-breaking, but still an appealing amount. Countless trichomes were spectacularly sticking out of the dried buds which gave them a most enticing, super sugary appearance.

Their heavy fragrance had hardly changed after the drying process, all notes previously perceived were still present, making for a compelling Kush scent experience. The Doc also hoped to gain a compelling experience from the Remo Chemo vapor test of course. When he loaded his Mighty vaporizer with half a gram, he suffered from heavy arthritic pains in his legs again.

He deeply inhaled a first draw, and when the healing vapor poured into his mouth, it got filled throughout with an immensely intense spicy Kush flavor that lingered for a good while after exhaling. ”Now, that’s Kush relish at its very best!”, The Doc swooned.

Immediately after the first toke he sensed that his synapses were switching to relaxation, a deep inner sigh went through The Doc, and a few tokes later, the whole thing became physical, too: bit by bit, the aches disappeared from his limbs, giving way to relaxed comfortableness.

Simultaneously it felt as if his head was turned into one big wad of cotton – a mighty indica stone was rolling through the labyrinth of his brain, making him tremendously stoned! Although he started to starve for some treats from the fridge, during the first hour he just wasn’t able to get up from his seat and go there, too heavy was the stonedness weighing down his body and mind. Then he managed to shake it off a bit, raid the fridge and satisfy his munchies.

The clock said 2.5 hours when that impressive Remo Chemo indica show was over.The Doc’s résumé: “The big hype around Remo Chemo is definitely legitimate, I can testify to that myself now. This strain is not only a great grow room companion, it has every trick in the book in terms of smell, taste and effect, packing a real wallop. And it’s a real blessing to me that it has got resounding medicinal qualities as well. Three cheers for Remo the Urban Grower, Dinafem and Remo Chemo!”