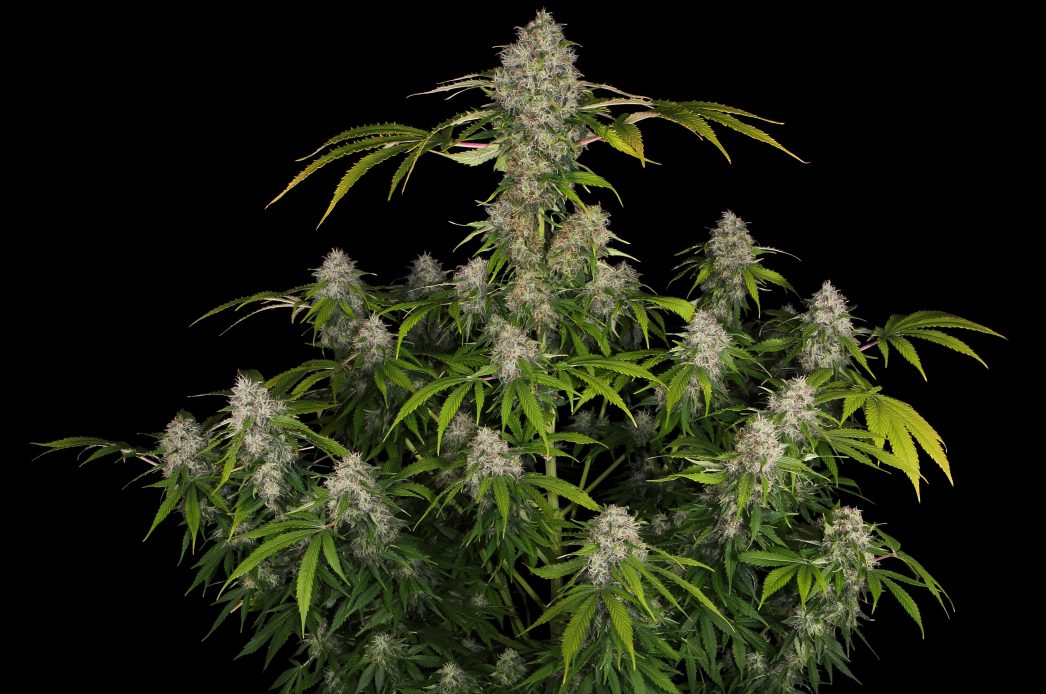 Since 1996 Sensi Seeds’ four-way indica hybrid Black Domina has been standing for merciless terrific indica power, fast flowering, fat yields and a highly special aroma. The Doc fell under her spell and got her in his grow room for a cultivation test. This strain story tells you what it was like for him to encounter Black Domina…

The Doc is a highly skilled and experienced grow veteran who, blessed with a huge green thumb, has been cultivating the Mary Jane plant for about 40 years. Widely admired for his extraordinary stately plants with big buds from the bottom to the top, he has gained himself a worldwide reputation as a top notch marijuana grower. He earned his nickname for his ability to always perfectly nurture his plants and generally fulfil their needs in any way, and in the rare case of a problem occurring, to make the correct diagnosis and fix it.

When the Doc flipped through the Sensi Seeds catalogue, he got caught by Black Domina, couldn’t avert his eyes from the strain photo, and suddenly a forceful voice in his head seemed to command him “grow! me! now!”…

For quite some time, he had felt attracted by that strain, and now that he was about to start a new cultivation cycle, Black Domina had ultimately put him under her spell. Feminised seeds were ordered in the blink of an eye and while waiting for their arrival, on the Sensi website the Doc read up about Black Domina: She’s a four way cross launched by Sensi Seeds in 1996 in which the power of four of the best indica strains ever bred is inherent: Northern Lights, Ortega Indica, Hash Plant and a special Afghani called “SA” – so Black Domina comes with the power of four Indica hearts! This quadriga gave birth to a 95% indica cultivar the leaves of which rank amongst the darkest in the world of cannabis strains, having the potential to look almost black.

Black Domina brings forth different favourable phenotypes, all of them displaying indica dominant traits such as stout bushy growth, low height, fast flowering (50-55 days), big tight buds and lavish resin gland formation. She’s easy to grow and thus a great grow room companion to any kind of gardeners, from beginner to expert level. Her heavy yield potential and quick finish makes her a worthwhile option for commercial growers as well.

A strain with such a name naturally raises the expectation of mighty potency and Black Domina certainly doesn’t disappoint in this regard – her numbing indica buzz is so strong that users may consider it a veritable narcotic. Which has the ability to rapidly make one fall asleep if not prepared for such a walloping effect. For people suffering from insomnia though, that kind of effect is beneficial of course. Black Domina also has excellent medicinal properties when it comes to muscle rigidity and pain relief for instance. The complex smell and taste of this variety is unusual and unmistakable once sampled, it’s highly savoury zest blends an earthy basic Afghani note with tones of blackberry and black pepper. In its finish, connoisseurs will recognise a typical black hashish flavour.

After the seeds had arrived, the Doc’s Black Domina session got started. After 2.5 days, the two seeds shown had successfully germinated. In the three vegetative weeks given, they revealed the same growth pattern, growing into bushy compact indica plants. The only difference was to be found in the leaf shape, with one of the plants producing more narrow leaves than the other.

When flowering was induced by switching the light cycle to 12/12, they measured 34 and 37cm in height. Lauded the Doc, “I like this strain a lot already by now. An indica with good vigorous growth right from the start, without that sluggishness that other indica strains sometimes display in the beginning.” He decided to give his two Black Domina plants names and called them Emma and Carmen.  After five weeks into flowering, The Doc reported “the stretching factor was almost 100% which I hadn’t expected. Even better Emma and Carmen are exhibiting voluptuous curves already at this stage. Throughout their bushy side branches, they’ve formed thick flower clusters with a very appealing high calyz-to-leaf ratio, with masses of white hairs emerging from these, and there’s plenty of bling-bling, too, as the flowers are already decorated with countless gleaming trichomes. Also, their scent increasingly gains intensity and complexity, I’ve got a good idea already of how condimental the buds will smell in the end.”

The buds kept on becoming thicker, more resinous and smellier, and after seven weeks of flowering, the end was in sight. With a flowering time of 55 days, Emma managed to mature just in time. Carmen flowered a bit longer, requiring 59 days to develop into a full-blooded domina. in the course of ripening, Emma’s shade leaves had turned light green in the end, but at least her sugar leaves has a darkish appearance. Carmen though had wrapped herself in an entirely dark green leaf coat, looking like a true domina. She was also a little bit more resinous, although Emma’s buds were heavily incrusted in crystals as well.

In terms of fragrance, they differed only very slightly. Both of them gave off a profound odour that, just as stated by Sensi, consisted of fruity-tangy and peppery tones overlaying an earthy oldschool Afghani basenote. Emma’s final measures were 63x63cm, “a square voluptuous marijuana domina”, comment the Doc with a grin. Carmen was almost as wide and tall, she arrived at a final height of 58cm.

The buds of both Black Dominas were rock-hard – before and after the drying process. Put on the scales, the entirety of buds weighed 213grams which made The Doc cheer “they’re two sensational heavyweight dominas, such a low height resulted in such a high yield, really amazing.” He was surprised that the buds of both ladies smelled ,markedly sweeter after the drying process, “and it’s a floral sweetness strongly reminiscent of violets – something I’ve never witnessed with cannabis buds so far. But under this sweet topping, that savouriness and pepperiness is still present, too”, explained The Doc.

The Doc was full of happy anticipation when he placed his “Mighty” vaporizer’s nozzle to his lips to test the poer and flavour of half a gram of Black Domina. A peppery prickling spread in his nose when he sucked the first load of vapor into his mouth where it released a concentrated sweet savouriness that seemed to accumulate in thick coatings because the aftertaste was extremely intense and lingering on the palate unusually long. After the second hit, the show was about to begin, Black Domina started to exercise her enormous indica power and The Doc felt his head and body becoming as soft as wax. The vapor clouds billowing from the vaporizer into his head seemed to circulate in there and thicken into a heavily numbing fog which made his eye lids droop and close. The powerful Black Domina stone weighed on his body and mind like tons, and The Doc was overcome by an irresistible desire to lie down in his bed. “Rien ne va plus!” was the last thought he had before he fell into a deep long sleep. With Emma, this scenario was precisely the same in the next evening.

Concluded by the Doc. “Black Domina has fully lived up to her name. With her mighty indica potency, driven by the power of four heats, she took commend and brought merciless stonedness over me. She gets high marks from me in all departments: her growing and blooming performance, yield, potency, smell and flavour. Thanks go out to Sensi Seeds for this tremendous outstanding indica hammer!”