The Borg – What a Nightmare by Subcool 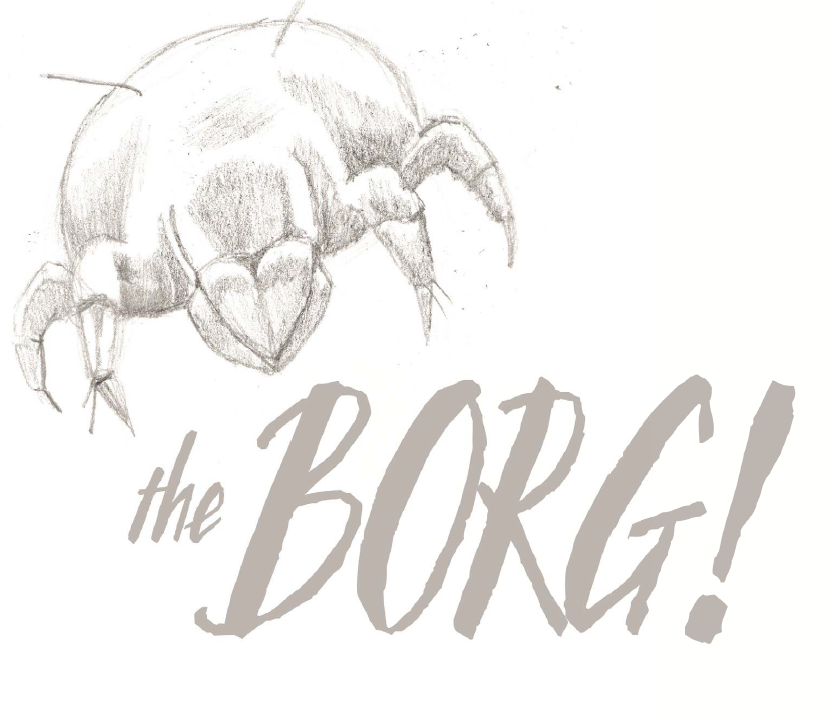 I had heard a few times of Russet and Broad mites during my growing career: “What a nightmare!”, I thought when I heard a grower mention them and then I made a simple mistake and they ended up in my garden. The Hemp Russet Mite is an invasive species with eggs that are smaller than glandular trichome heads. They are invisible to the naked eye and after death a female can lay 100 eggs. They look like Weed Maggots!  I can think of nothing more disgusting and during the course of a month I learned more than I should have to know about this pest. However, I can now pass on what I learned without rumor or bullshit fact as we now show no signs of infestation after I took the steps outlined below. But first – how the hell did I get them?

I have always advised never to take in a clone from a grower you don’t know very well and even if you do know them it is best to assume it was infested with something. While controversial, in the old days as a seed breeder I always dipped my intake clones in Avid, a pesticide that kills just about everything and is systemic meaning it can stay in the plant. Since I produced only seeds for so many years, plants grown from these seeds always test negative and it was a good way of making sure rare cuttings could be transferred over without too much worry. Even now some growers use Avid on clones for flower crops, but you must grow the plant out 3 times to a healthy bush and take fresh clones to make sure it does not test in any solvents made from that cutting. WE NO LONGER USE AVID! That’s right: I grow flowers these days and we only use natural or organic products. After the fire, I was collecting as many cuts as possible and treating with products like Dr, Zyme and Nukem which are mostly oils and its unique formula is comprised of 100% food grade ingredients that are commonly found in every day food products like bread! Patrick King has even told me that he drank Dr. Zymes before.

Now, one of the clones I took in was infested with invisible creatures and the person that passed me the clone said “It Should be clean” this was my first mistake trusting someone’s word. Don’t assume anything with a cutting or plant someone gives you unless you assume the worst and save some headaches.

I treated the cuttings and kept them apart from the main garden, but, when starting over I was rushing so I moved the plants into the main area next to my existing plants. Within a few weeks I noticed the plants showing signs of nutrient deficiency and an overall loss of vigor. Thinking we had made mistakes mixing Super Soil, we started feeding the plants with Dragonfly Earth Nutrients even though the plants should not have needed anything. The garden just didn’t look right and we treated for fungus gnats with sand hoping this was the problem. Unfortunately, the gnats went away and the plants still looked poorly. I was filming one day and a viewer named St. Bernards Observation Booth said, “Looks like Russets to me, Sub.” The new growth was deformed and gnarled – I assumed over watered – I thought there was no way I would have those things and decided to order a 1000x USB scope and see for sure. I was positive he was wrong and other friends said the same thing. I was shocked when under the microscope I saw hundreds of crawling maggot-like creatures on all my budding plants. INFESTED!

Some people think that the DEA created this super bug to eradicate Cannabis but it was placed along roadsides in the major areas of the US to control invasive weeds. Before everyone grew there was no way for them to get into gardens, but now with Medical and recreational growing so many people have gardens that these bugs have a new habitat: your Plants!

What are Hemp Russet Mites? First off, they are Tiny (about 0.2 mm) and much smaller than a spider mite. Its scientific name is Aculos Cannabicola and they have a pale beige body. The adults lay 10 to 50 eggs Inside of the plant! Yes, INSIDE! Obviously this makes them very hard to get rid of using normal methods. They feed on Resin during flowering and are extremely hard to kill even with direct contact with Nukem and Venerate. They inject your plant with a toxic to weaken its defenses and this is what you start to see as they’re literally making the plant sick. Being so small, even a veteran grower can miss them – I had a helper here and he was clueless to the fact that I was infested. We were even thinking they came in after he stopped helping, but they came in on that one clone. You could see the spread from that area once I knew aliens had invaded my garden.

So, how the hell do you kill them without using pesticides?

This first part is the hardest and one you probably will hesitate to do at first (like me)…you have to kill off your flowering plants! The number one tool in the fight is Micronized Wettable Sulfer and you simply can’t spray this on flowering plants and process the flowers in anyway. We tried treating the plants in Flower with the following before killing 40 full grown plants…I know…it was hard to stomach, but it had to be done.

They were still alive and it was at that point we knew we had lost all the work we had put in to fill the flower room. All plants were bagged and pulled out of the room and all pots, soil and everything else was taken directly to the dump. The room and yard were treated with Avid, then washed with Simple Green and then again washed with bleach and then once again with Simple Green. All reflectors, walls, cords were wiped off, the floor was torn open and treated and washed 4x.

Even the ceilings were scrubbed down.

Make sure to wear a protective suit and respirator during all of this.

All plants in flowering were killed and all plants in veg were treated with Micronized wettable sulfur, 3 times over 2 days then all plants treated with Nukem and clones taken. The USB scope is used daily to inspect new growth and old ensuring nothing is alive and no eggs are present. Plants are now treated with an IPM regiment of Sulfur on Monday and Nukem on Fridays ensuring all plants are clean before entering the flower room.

Killing flowering plants that patients may be depending on is the tough part. You can’t use anything that will kill them once they’re in flower that doesn’t ruin the taste of the end product – plus your buds are already infested with weed maggots. I would not share the flowers from my garden or even press them, but I donated them to someone who made creams and such.

Someone told me when I got Russets that I would have to move to a new place and I thought I might have to for awhile, but it’s so far so good and you can follow our fight on Instagram (@subcool420). I check for anything with the scope live so others can learn from what I learned and my mistake.

So what did we learn?

Know where your clones come from and assume the worst if you don’t or you may be assimilated by “The Borg”.