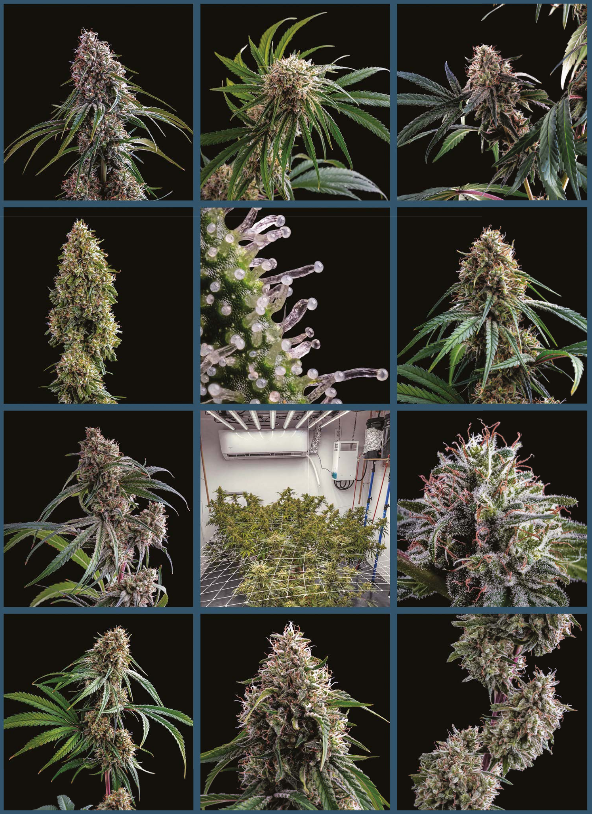 His photography is nothing less than spectacular

I first noticed some amazing photographs on the social media platform Instagram and of course I started paying attention. Then I started to see strains I had created grown so well I could hardly believe my eyes. It wasn’t long before I became big fans of Teamterpene. I wanted everyone to see his incredible photographs of Deadlights.

The thing that was so unusual about their grow style was a full room of cannabis buds in what looked like a single pot – a nice scrog net over the top is what it looked like to me and I’ve never seen so much weed coming out of one pot indoors in my life.

He was growing Deadlights (our 20:1 CBD strain) and I had never seen colas so large on this variety. Some phenotypes can hit 28:1 with Deadlights and I have never really concerned myself with yield when it comes to something so rare. Who knew these monster plants were locked inside a tiny seed?

I wanted to know more about this grower so I started following him on social media drooling over his pictures. Eventually, I contacted him and started asking him about his grow style.

His photography is nothing less than spectacular and I wanted immediately to know more about his style and what he shoots with. He was kind enough to enlighten me:

“Ok, I shoot the Canon 5d Mark iii. The lenses I shoot with depends on my angles I’m looking for. For my wide angled shots, I will equip my EF 24‑70 mm f/2.8L II USM Lens. For my 1:1 ratio shots I’ll shoot with my EF 100mm f/ 2.8 Macro USM Fixed Lens. For my zoomed in macro shots I’ll reach for my MP-E 65mm f/2.8 1-5x Macro Photo Lens. My garden shots are mostly shot at f11 and will adjust my iso if the shutter speed is too slow. My studio shots are hand held, but my macro studio shots are shot on a heavy duty Gitzo tripod. The studio lighting, I use are two Canon Speedlite 600EX-RT E-TTL with Manfrotto 2ft x 2ft soft boxes.”

Phil told me that they are using only plain water with a couple of compost teas during the veg and bloom cycle. The lights they run are Spyderx plus lights from Fluence bioengineering. Their rooms are sealed with supplemental CO2 burner and a 1.5 ton AC unit

Their style is No till and they reuse the same pots with the same soil each cycle. They use top dressed plant material and consists of mainly defoliation of the plants (stems, leaves), holy basil, nettles, yarrow, dandelion leaf, neem leaf, horsetail, alfalfa and hay.

They make sure and keep keep the mulch layer about 1 inch thick. They never disturb the soil so the root balls stay in the soil and are broken down by the soil micro life and used as energy to feed our plants. They use cover crop that consists mainly of clovers and fenugreek as our nitrogen fixers.

I asked Phil to tell me a little about himself.

“I was a craft beer brewer for 20 years. In 2011 I was Midwest homebrewer of the year. I also worked with a local brewery and won multiple awards with them, including a gold at the world beer cup in 2012 for our India pale ale. Three years ago I became celiac, gluten intolerant. It was like someone ripped my soul from my body. I had to dig deep within myself to find a new passion. That’s when I stumbled into photography and then growing.”

Phil entered a Photo Contest that he placed highly in and when he submitted the pictures of his Deadlights I knew I had to try and get him published, so I asked him for a small quote.

“Thanks a million. Phil “Sully” Sullivan here talking about Team Terpene Deadlights. Team Terpene’s preferred method of growing is the process of No-till farming, without disturbing the soil through digging, stirring and overturning. This method builds humus rich soil, through a constant added source of organic material, microbial and enzymatic activity, and therefore plant nutrient availability.

Nothing can replace the benefits when this is allowed to occur naturally in your container and the soil to be left alone. There are many benefits to the no-till process but the most powerful benefit is that it makes soil more resilient. Five seeds were sowed into our 30 gallon, third cycle, “no-till” pot and four sprouted. Three of the four plants were female and the male plant was removed at the base and applied as mulch. Only plain water is applied to our pots keeping the soil consistently moist which allows life to move about, breaking down the leaves and stems, which recycles nutrients back into the soil. Once this plant material diminishes, and we don’t have material left over from each crop, our other alternative is a mixture of organically grown straw, comfrey, nettles, yarrow, dandelion leaf, neem leaf, horsetail and holy basil. Maintaining this mulch layer will keep your soil in a state of maximum performance allowing your crops to perform at peak health. No-till farmed medicine not only tastes better and performs the way Mother Nature intended, but you know what you’re putting into y our body. ”

“It was an honor having Deadlights in our garden. These three plants leaned towards sativa and threw the most incredible looking “spears” we’ve witnessed. Some of the leaves had a slight pink hue to them when ripening up. Along with the aromas, this strain was absolutely stunning.”

I can tell you that his pictures are amazing – the lighting, the cleanliness of the room and the shaping of the plants…everything. It is nothing less than amazing and the reason I “discovered” him as it were. He has a lifetime membership in Sub’s Free seed club. I hope you enjoy his photography as much as I do. I urge you to check out more of his work on Instagram at @teamterpene