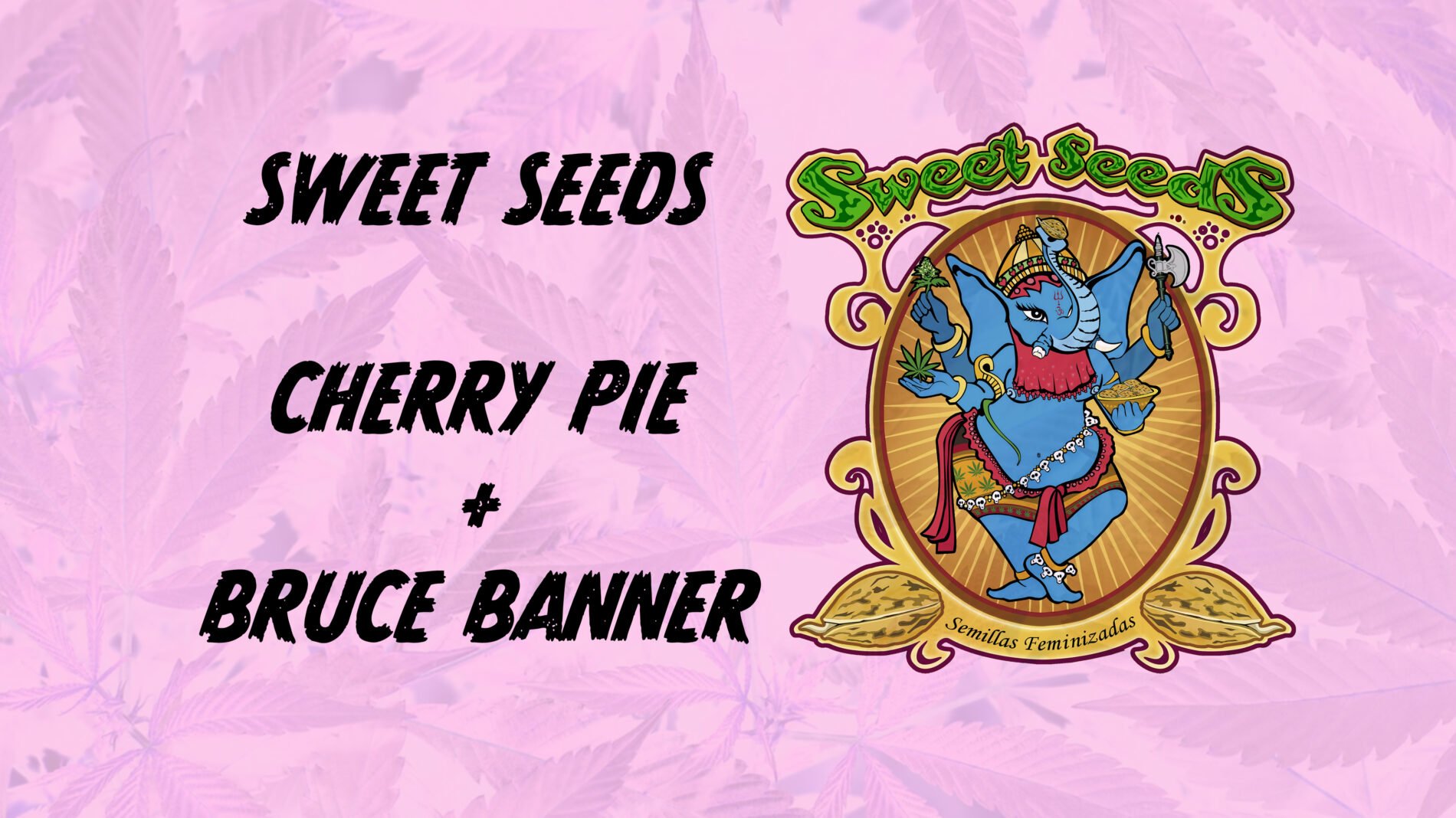 There are times when you can’t make up your mind about simple decisions, like choosing the strains you will be growing next.

Sometimes the best choice is to go with two complete different strains. Especially if you have two separate growing areas or if you grow indoors and outdoors. In my case it happened just when the outdoor season was starting, so I decided to get Bruce Banner Auto® (SWS91) for my outdoor garden and Sweet Cherry Pie® (SWS92) for an indoor adventure. Two new releases from Sweet Seeds® that are the perfect opposite of each other in many ways. Bruce Banner Auto® is a mostly Sativa autoflowering strain and Sweet Cherry Pie® is a mostly Indica photoperiod-dependent strain.

I could have chosen Sweet Cherry Pie® for a full season outdoor grow, with a long vegetative stage, from March to July and maximum production, but it was a bit risky as the plants would only be ready in September and sometimes it rains by then where I live. Like this, germinating all the seeds in April, I would have the autoflowering plants in my garden ready to harvest by late June or early July and the photoperiod-dependent plants in my grow tent ready to harvest just a few weeks later.

And so it started, with 3 seeds of Bruce Banner Auto® outdoors in 30 litre pots and 4 seeds of Sweet Cherry Pie® indoors also in 30 litre pots. All the seeds sprouted in less than 72 hours. The outdoor team started in 1 litre pots and the indoor team started with 500 ml pots. All the plants were grown together in the first 14 days, under a total of 68 watts of CFL lights. At day 14 they were transplanted to the final pots, as previously mentioned, and placed in their growing and flowering areas. The 3 Bruce Banner Auto® were placed in a sunny balcony where they received direct sun from early morning to sunset. The 4 Sweet Cherry Pie® were placed in a 80cm x 80cm x 160cm grow tent, which is ideal for 4 plants in 30 litre pots.

At day 21 all the Bruce Banner Auto® plants were already totally adapted to the sun light and they were growing fast, reaching to around 20 cm in height. The Sweet Cherry Pie® plants were slightly behind at this point, as expected, with around 16 cm in height. The soil mix used was the same for all the plants and I also added 50 grams of powdered bat guano in the lower layer of soil in the pot, where the roots will reach a bit later during flowering, and 1 litre of worm humus per plant in the top layer of soil, to help with the Nitrogen (N) supplies during the first stages of flowering. At day 28 the outdoor team started to show the first pistils and in the same day I changed the photoperiod from 18/6 to 12/12 in the grow tent. The light used was 400w HPS, which I find ideal for this area with my RVK 125mm air extractor. 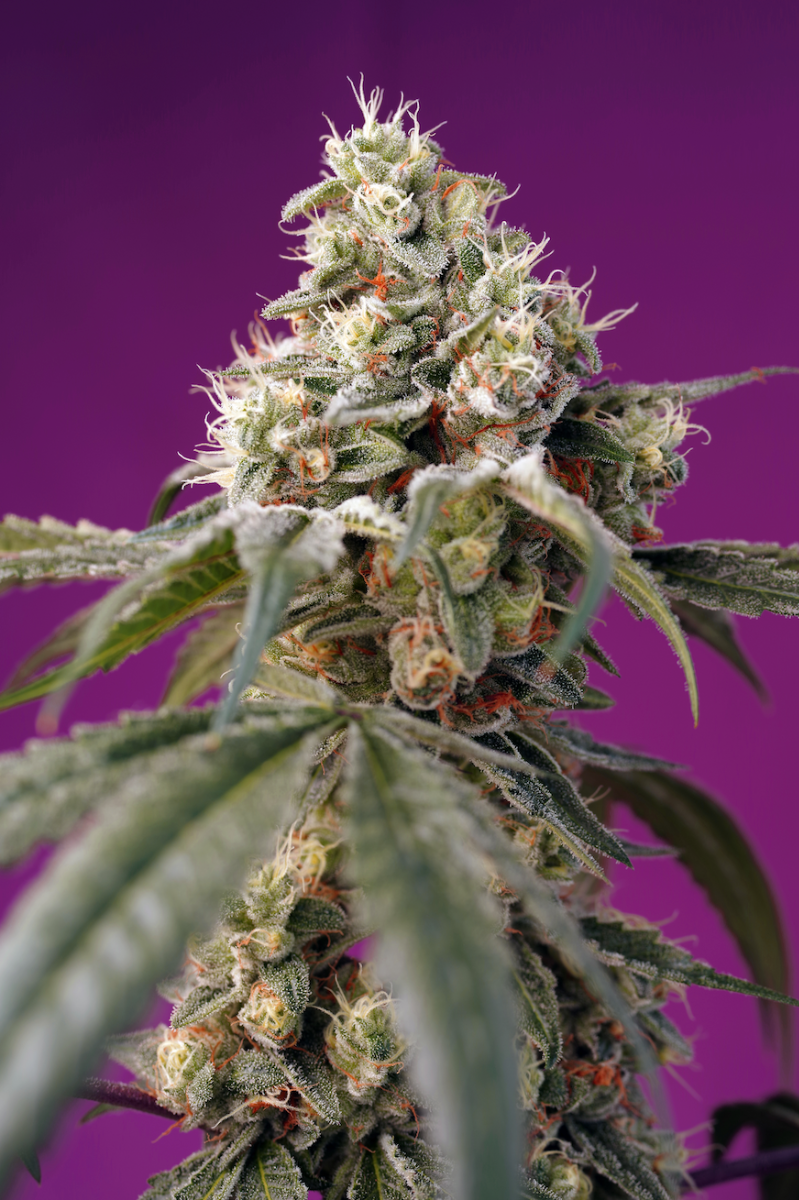 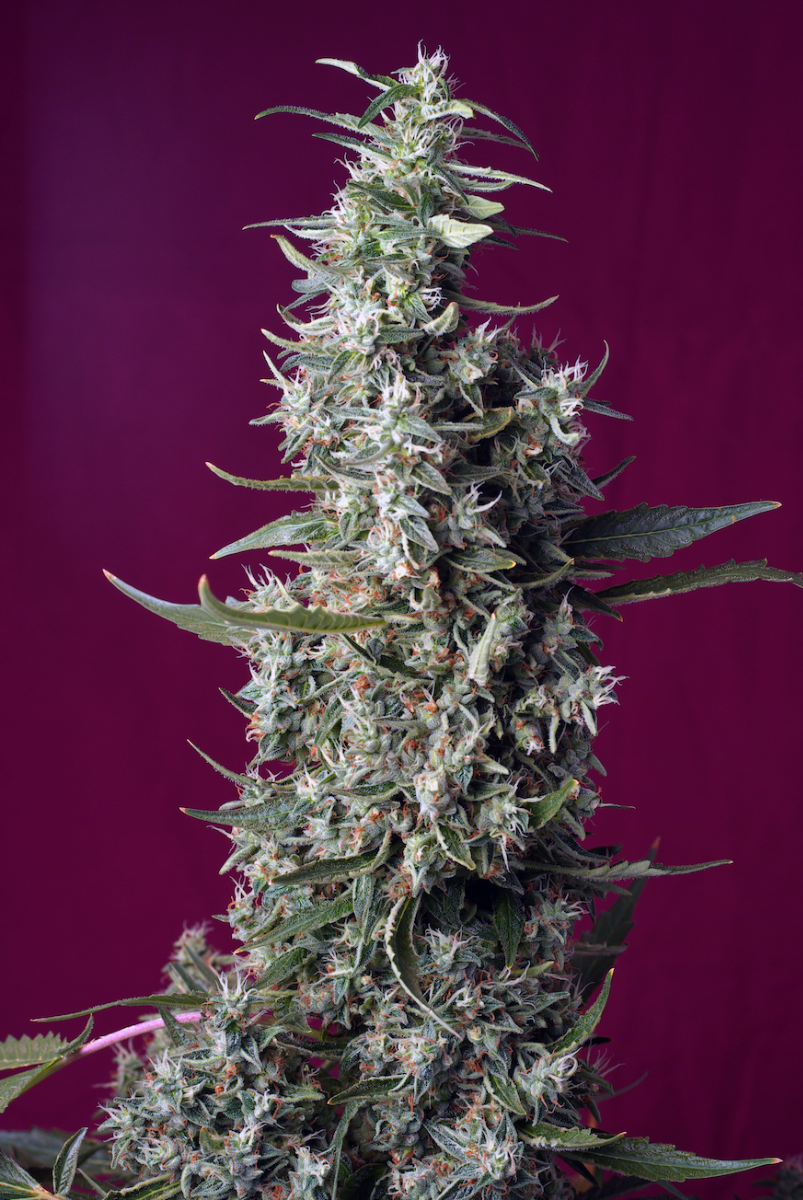 Between the 28th and 35th day the plants stretched like real champions, with Bruce Banner Auto® reaching to around 40 cm in height and all the Sweet Cherry Pie® plants with heights ranging between 34 cm and 38 cm. As there was still a good amount of empty space in the tent and the plants were growing a lot vertically, I decided to do some Low Stress Training (LST) to lower the tallest branches and get a more even canopy. With this, the 4 plants were levelled to 25 cm in height. The outdoor team was not subjected to any LST as they can get a good amount of sun everyday from the lower to the upper branches, evenly. Instead, they had a bath with neem oil as a preventive, because in previous years I had some problems with pests in this balcony.

At day 42 from germination the outdoor plants were already crowding up together the pistils in all their bud sites, forming beautiful flowers. The 3 plants of Bruce Banner Auto® just kept growing and growing as if there was no tomorrow, under the intense sun of late May in South Europe. At this point they already looked like pine trees, with lots of strong and firm side branches, reaching to around 65 cm in height. The resin production was already becoming very visible and most of the buds were starting to get covered in trichomes with fresh and fruity aromas. I expected to have them ready to harvest 3 to 4 weeks later so at this point I decided to give them their first watering with flowering liquid fertilizer. The plants responded very well and were truly grateful for it, showing me superb flower development.

By the same time, the indoor team with the 4 plants of Sweet Cherry Pie® was a bit behind, but the plants had most of the flowers very well horizontally levelled, as a result of the LST session performed a couple of weeks ago. Some trichome production was already visible and a bit of its forest fruits aroma was definitely present. Just a couple of weeks later, with 56 days (28 of which in the flowering stage) the plants already had some nice buds forming in the tips of all the branches. Sweet Cherry Pie® (Cherry Pie x Gelato) is a mostly Indica strain (75%) that produces attractive, compact, thick buds covered with aromatic trichomes and this became noticeable right after the 5th week of flowering.

At day 63 the 3 Bruce Banner Auto® plants were mature and ready to harvest, with all the buds showing beautiful colours and fantastic fragrances. Sweet aromas with fruity and floral notes, reminiscent of the Diesel family, in a background of earthy tones. I just waited two extra days for a more relaxed effect and proceeded to harvest the 3 monsters. They were very big in both ways (vertically and horizontally) with a bushy shape. I estimated to have it ready to sample in about 2 weeks, possibly when the indoor team was going to be ready to harvest.

And so it happened, after 8 and a half weeks of flowering, the indoor team composed by 4 Sweet Cherry Pie®, was ready to harvest, also with outstanding fragrances. The sweet and fruity aromas evoked memories of home-baked cookies, cherries and earthy shades of acidic wild berries. Simply delicious. I was even sad when I harvested them, but it had to be. Thanks to the Grand Daddy Purple ancestry (from the Cherry Pie parental), some plants display purple of reddish tones in their leaves and flowers. In my case two of the four plants featured these wonderful coloration.

At this point it was late June and I already had the outdoor plants ready to smoke/vaporize. I was also able to weight them, with an amazing yield of 372 grams from the 3 plants (124 grams per plant). Bruce Banner Auto® is a 7th Generation autoflowering strain which is the autoflowering version of one of the most famous “Super Strong” strains from the West Coast of the USA, the powerful and revolutionary Bruce Banner, which was developed in Colorado to delight cannabis growers from all around the world. Bruce Banner Auto® from Sweet Seeds® is the result of the cross between and elite clone of Bruce Banner and a selected strain of Gorilla Girl XL Auto® (SWS82). This is an extremely aromatic strain with high THC levels that can reach to up to 25% or even higher in some plants. It features a potent long-lasting effect that enhances imagination with an euphoric and happy mood.

Two weeks later the 4 Sweet Cherry Pie® plants were already dried and had a few days of curing, so it was time for a smoke report. The taste of home-baked cookies and cherries was very present in three of the four plants and it is really a feast to the taste buds. The plants produced 315 grams of the most delicious dried flowers, which is quite a nice yield for only 4 plants with 400w HPS. In regards to the effects, this plant is ideal for fans of indica-sativa hybrids given its relaxing and well-balanced effects that can help you to get creativity flowing while stimulating your focus and concentration. The THC levels usually range between 18% and 25%, hence the powerful effects.

It all started by the 14th of April. By the end of June, about 9 weeks later, I had the outdoor team with 3 Bruce Banner Auto® ready to harvest. And by the 10th of July all the indoor team with 4 Sweet Cherry Pie® plants was also ready. Both harvests got me enough stash for at least 6 months. And the two strains are the perfect match to each other. It’s like a sweet symbiosis. My Bruce Banner Auto® jars are filled with a mostly Sativa strain, autoflowering and grown outdoors. My Sweet Cherry Pie® jars host the most wonderful and tasty Indica strain, photoperiod-dependent and grown indoors. The best of both worlds, from Sweet Seeds®.