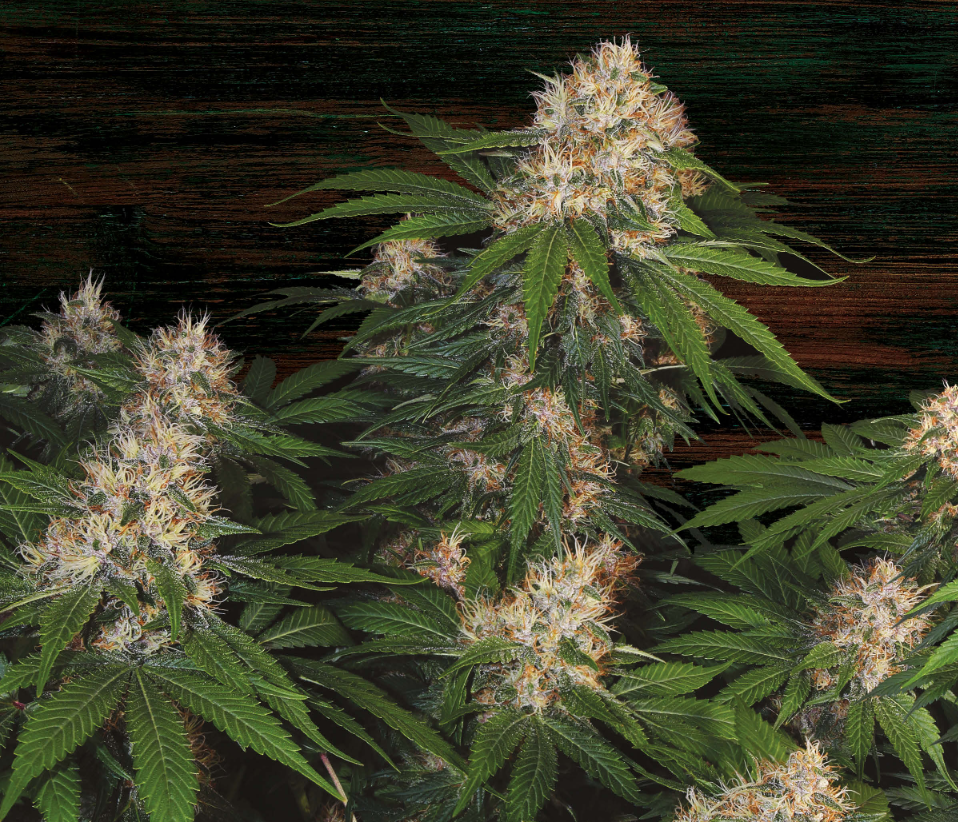 It’s about time to report on a true strain legend again that saw the light of the day in the USA: MOB aka Mother of all Berries or Money over Bitches, brought to you by famous seed company T.H. Seeds.

The story of origin behind this strain has not been revealed yet, but on the occasion of this article, DougE from T.H. was willing to do so: “In the mid to late 90’s, a big bag of Cali weed ended up in Boston which had a few seeds – no one knew the strain name.

This true bomb weed, apparently 100% indica, was originally called MOD as this was the initials of the guy who grew it out, mothered it and got it going. But since it was getting too popular and they wanted to hide his identity, they changed the name to MOB. The crew that got it out there was the old Boston skateboarding community. The original guy gave a cutting to a friend of mine who brought it to me and it was originally grown on my roof top, flowering super fast. Then we sent it down to Spain for further selection and feminised seed production.” So once again the excellent US connections of the long-established Dutch seed company had, literally, come to fruition… 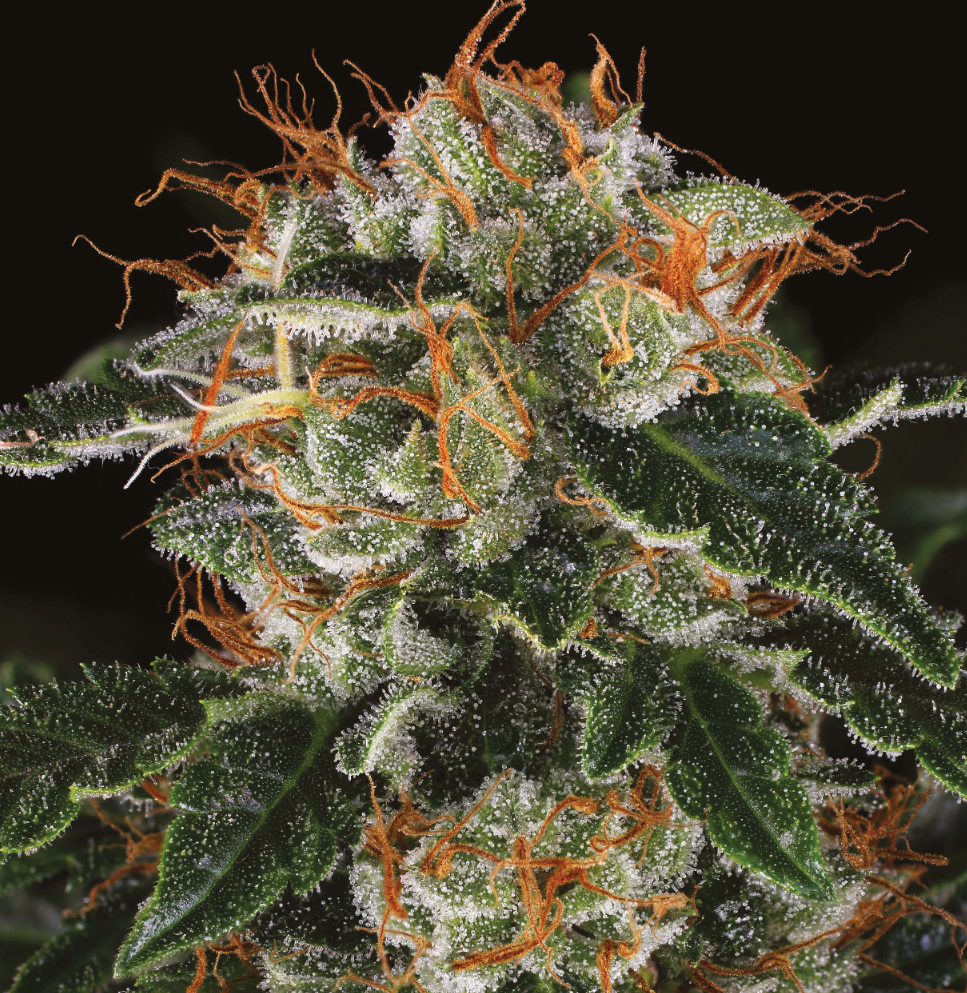 T.H. Seeds’ MOB is described as a short, compact growing plant which performs the miracle of producing its exquisite berrylike and highly resinous buds within a mere 42-55 days of flowering. Not only quickness and quality count amongst its strengths, though, but also quantity: Thanks to their handy size, robust branching and easy management, MOB plants are considered as perfect plants for novice growers. And very conveniently, their fat hard buds possess a good mold resistance also.

That’s why this variety is praised and used by many as a very effective sleeping aid. Generally regarded as a strong medical strain, others are also successfully treating stress disorders and chronic pains with it, for instance. With regard to its heavy drowsy indica effect, The T.H. crew also refers to MOB as “stupid bud”, because when they smoked it the first time, it was fun all the way, but everyone forgot their keys in the end! According to T.H. Seeds, there’s something unique to its flavour, “like nothing you’ve ever smelled or tasted before.”

After it had been launched, it didn’t take long until MOB clinched a first award, winning 2nd place in the Indica category of the prestigious Expo Grow Cannabis Cup 2015 in Irun, Spain. Being the ardent T.H. Seeds fan that he is, The Doc was highly excited about this new strain release and promptly ordered a package with five feminised seeds of which he used four for a cultivation test. After a fast germination time of 2.5 days, the four seedlings stood upright in the bright light emitted by a SANlight S4W LED module.

MOB’s growth habit entirely lived up to the official description, with the four plants growing super compact, looking very squat, like indicas straight from the picture book, except for one difference though: their shade leaves were not as wide-fingered as those of a classic indica plant. But internodal stacking was immensely dense, and when The Doc triggered them into flowering four weeks after germination, his extremely bushy four MOB plants were only 28, 30, 31 and 34 cm tall – wonderfully uniform once again, just as The Doc is accustomed to from T.H. Seeds: ”In my grow room, T.H. Seeds set the gold standard for strain uniformity a long time ago, and they’ve kept it until today, quite amazing!”
Two weeks after the light cycle switch from 18/6 to 12/12, the four plants had already busily begun to bloom, “as fast as an express train”, reported The Doc. MOB turned out to be the fastest out of five varieties growing in his room.

Wrote The Doc in his grow diary after four weeks of flowering, “already at this early stage of flowering, the four plants are looking impressive. Still very homogeneous and still that extraordinarily compact as stem elongation during flowering has been only moderate, with a height gain of merely 60-70 percent. It’s evident that all the buds – top and side colas alike – are about to become thick and chubby. I also love the fact that as early as now, they’re plentifully bestrewn with resin glands. Keep it coming, Mother of Berries!”

The four MOB plants kept their high flowering speed until the end and reached maturity after 46-52 days of flowering – well within the harvest window stated by T.H. Seeds. Said The Doc, “one of the four plants remained green, but the other three are displaying attractive purples hues, indeed, absolutely nice! Also, the buds have become as bulbous, dense and super tight as expected.

And they’ve put on a splendorous resin vestment lined with myriads of majestically glistening trichomes.” However, they were not only looking gorgeous, but also fulfilled the promise of an exquisite berry fragrance which made The Doc rejoice “ahhh… these aromatic wafts of a fruity-sweet scent are a most enticing treat to my nose. You just have to inhale them deeply! The berry aroma is so smooth, so caressing to my nose, it makes me think of some fruity kind of perfume infused with different forest berries. So the “Mother of Berries” has really lived up to its name here.”

The total dry yield tipped the scales at 273 grams which equated to an average of 68 grams per plant. Compared to the yield level generally achieved by The Doc, MOB wasn’t a smasher in absolute terms, but in view of the small plant sizes with final heights of 46, 49, 54 and 58 cm, the yield-to-size ratio was superior. When through drying and fermentation the chlorophyll had vanished from the buds, their delicious berrylike nature had become even more pronounced and sophisticated, “a fine example of a fruity cannabis delicacy”, The Doc swooned over MOB. For the smoke test, he rolled himself a joint with more weed in it than tobacco. “My new motto is ‘put the berries in your tank!’”, he commented with a broad grin. Holding it under his nose, the entire joint smelled sugar-sweet.

When he took the first hit, a sweet stack of smoke wafted into his mouth that made his taste buds dance with joy: “Incredible, how this fruity berry flavour accumulates in my mouth! Three tokes and you think you’ve chewed a Hubba Bubba.” Winding down from a hard day with many issues to be solved, he began to feel like seeing things through rose-colored (or rather: green) glasses, his view upon life and its problems became relaxed and serene. This mellow wave of serenity made his head feel light, but not long after that, his “mental wadding” thickened heavily and turned into a numbing mighty cushion that seemed to blanket all his senses.

His eyes, his jaw, his limbs – everything went slack, and although he actually never takes a nap during the day, he now felt a strong desire to do so. Unstoppably, Sandman was drawing nearer, and once The Doc’s eyes were closed, it didn’t last long until Sandman took him to the realm of sleep. That little nap intended lasted for two solid hours then, and when The Doc woke up again in the early evening, he still felt quite spaced-out. Which didn’t keep him from preparing another MOB spliff though which led to a long-lasting couch-lock with tremendous stonedness, but without putting him to sleep this time. Instead, he happily indulged in his passion for listening to Pink Floyd.

Concluded The Doc, “MOB has wowed me with its beautiful appearance, short flowering time and nevertheless high productivity. And its tremendous indica potency makes it a highly effective natural sleep-inducing drug. I’ve called it Sandman’s favourite indica – by means of this stuff, he’ll lull even the most severe insomniacs to sleep. And oh, the icing on the cake is MOB’s mouth-watering sweet berry flavour!“ 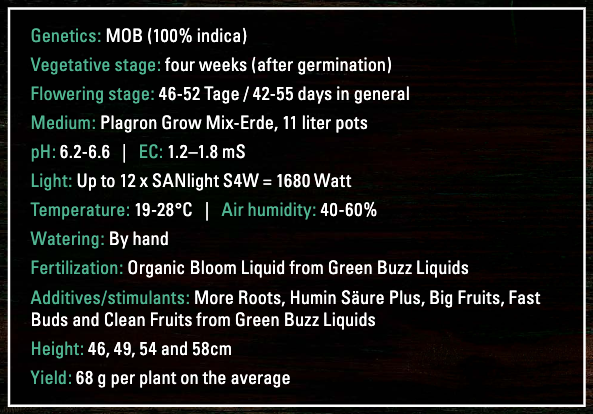