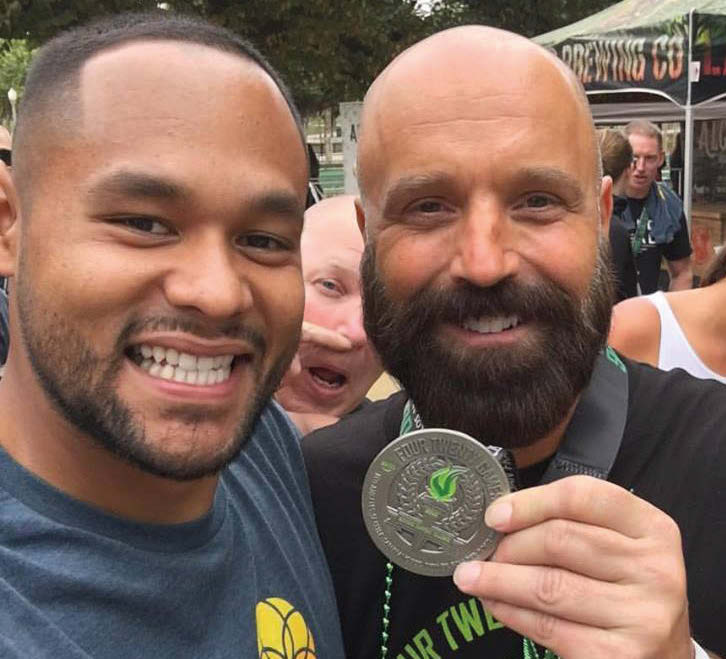 A green and organic workout

California personal trainer, Brian Kaho shares the idea that if you smoke weed you are already familiar with a few of the ten breathing techniques he teaches his clients – many of whom use the herb for increased stamina, and to fight-off inflammation and subsequent pain.

Kaho was late to the table where cannabis was concerned and didn’t partake until after high school, at the age of 19. Three months later, he became a runner.

While attending Ponderosa High School in Shingle Springs, California, near Lake Tahoe in Northern California, Kaho was on the wrestling team as a heavy weight one season and then played Left Guard and was awarded Second Team All-League in his senior year, graduating in 2003.

A tear in his left meniscus during his junior year put the brakes on his athletic career, and it was music, not sports, that led him to the beneficial herb, allowing him to come full-circle, back to sports.

“I started rapping at the age of 16, and wrote many songs in my composition notebook,” he shared. “It wasn’t until I moved back to San Jose and finally gave into the pressure of friends, that I began to smoke weed.”

Peer pressure came via a “Hip-Hop Cypher;” a freestyle circle of rap.

“My creativity with lyrics, rap patterns, and cadence to ride the beat was impeccable with cannabis,” he continued. “I discovered how focused cannabis made me while rapping; with increased endurance for beat boxing. Time after time, I knew what was happening, but from the outside, looking in, I thought I was ‘just high.’”

Kaho said he performed a great deal on stage, and smoking cannabis before taking to the stage became his routine, putting him in the “right zone.” Today, as a trainer, he helps others get into the zone, many with the help of cannabis.

The thirty-two-year-old was born in San Jose, California to immigrant parents. His mother hailed from the island and Kingdom of Tonga in the South Pacific; with his natural father from Guadalajara, Mexico. Raised by his stepfather of German decent, Kaho said his nationality was misunderstood in the predominantly white school in America.

“My high school didn’t have much diversity at ninety-eight percent Caucasian – I was point one of one percent,” he laughed. “This was as much a culture shock for them as it was for me. Most kids thought I was Black or Hawaiian. In the end, Sports helped me fit in, and I made a lot of great friends and gained a profound understanding of humans.

After high school Kaho said he was still carrying a footballer’s weight, and tired of being called a “Teddy Bear.” After a friend’s advice that he “Wake & Bake,” he added cannabis to his morning workout, with excellent results.

“I knew I was going to go for a run and didn’t think about how I would feel after I smoked,” he explained. “So, I smoked the weed, and I was extremely high, but didn’t feel sluggish or tired. I felt a weird sensation of pleasure and energy. I grabbed my running shoes and went outside for a jog in my neighborhood. As soon as I began to run an instant rush of endorphins hit me. I was so in tuned with my body and mind that the jog seemed effortless.”

According to Leaf Science.com, Dopamine is a brain chemical responsible for the pleasure you feel when eating, having sex, or when using drugs. It fuels our lab rat mentality, causing us to push that button until our fingers bleed – even if what we are doing is not good for us.

Luckily with cannabis, the rewards are equal to the health benefits found within the plant. Humans will self-medicate, the trick is knowing why, and being educated on healthful options.

In training others, Kaho said the cannabis topic is approached on a one on one basis.

“Now that legalization is in effect in California, it’s getting easier to talk about cannabis and working out,” Kaho informed. “Before it was a hush-hush topic, but I could kind of tell when someone was open to it.”

With legalization, the covert drawing of a proverbial leaf in the sand with your toe, so to speak, in letting others know you are copasetic to the herb becomes easier. One of Kaho’s clients was already smoking a joint prior to his workout.

“He smokes a joint just before the workout, to enhance his performance,” Kaho explained. “Then he smokes one after to quell inflammation and pain. Edibles are different. With smoking, the effects take about two to five minutes to kick-in; with ingesting, it takes about 20 to 30 minutes.”

Kaho likens his workouts to eating organic produce, stating it’s a holistic approach to a “green and organic workout,” with breathing techniques a big part of a runner’s high, so to speak.

Kaho’s breathing techniques are unique, and though proprietary, he said he does incorporate the above two steps, adding eight more, with a total of 10 breathing steps in his runs with clients – with or without cannabis in the mix.

“Every style of a work out has different postures and the numbers don’t correlate to health,” he shared. “Endurance breathing for runners is similar to a swimmer’s – the time they need to catch their breath, surface, catch air, then go back to swimming – I do this with running.”

With California legal for cannabis, Kaho’s training with the beneficial herb is in demand. Gigs have included participation in the 420 Games – a 4.2 mile run and festival-type event; he was awarded Cannathlete of the month February, 2018; teaches training courses at Power Plant, a cannabis-friendly gym founded by 420 Games organizer, Jim McAlpine in San Francisco; and more workshops in the planning stages now.

The future looks fit and a bit green for the rapper turned trainer – exceeding in both, thanks to cannabis.

“This is my time!” Kaho announces enthusiastically. “As I work more closely with Jim McAlpine of the 420 Games, I’m finding more similarities in our passion and dedication to spreading the word of cannabis health fitness. As Jim would say, ‘coming out of the stoner’s closet,’ means speaking up and educating the masses on how cannabis can work for you.”