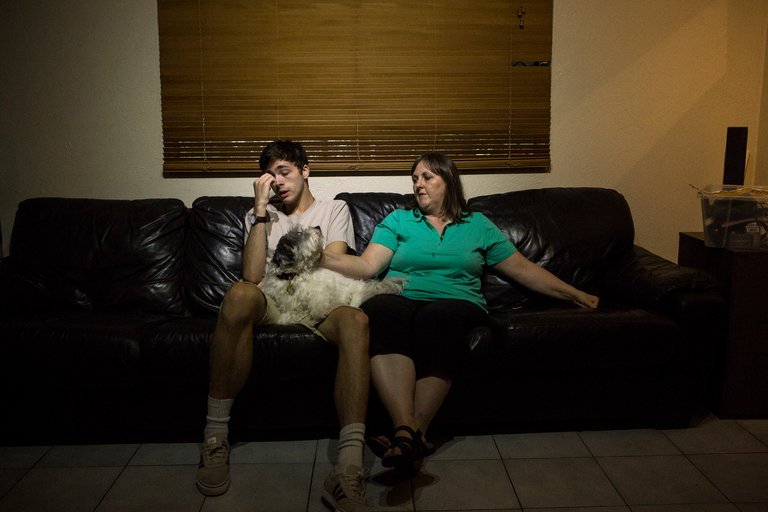 Many Australians seeking marijuana for medical reasons obtain it illegally, preferring the risk of criminality to the struggle with bureaucracy.

Lindsay Carter had his first violent seizure at 14. He toppled face first onto a tiled floor in front of his father.

At 19, Mr. Carter can still have seizures several times a month that can convulse his body and threaten his life. But more often, the recent high school graduate experiences “focal seizures,” which temporarily arrest his ability to speak or comprehend.

When he gets what he describes as “clouds in my head,” he turns to a legal but difficult to obtain remedy — medical marijuana.

The teenager has become in recent years a reluctant poster boy for the drug’s medicinal use in Australia. Appearing in news reports and radio programs broadcast across the country, he tells a story that exemplifies for many the absurdity of the nation’s marijuana regulations.

Mr. Carter said he knows that talking to the news media is necessary to publicize the issue, but he added that all the attention had made him feel he had to appear “perfect.”

Australia legalized medical marijuana in 2016, and the country’s health minister said this January that he wanted the nation to become the world’s leading supplier of the drug.

But in a cruel paradox, people like Mr. Carter — who has been told he has a brain tumor and epilepsy — find it hard to get the drug in their country. Bureaucracy and regulation, uninformed doctors, limited supply and high costs make what in some cases could be a lifesaving drug nearly impossible to obtain.

“We don’t have a consistent, regulatory framework that is either efficient or timely,” he said, “and this is what makes it so frustrating for medical practitioners and for patients who are clearly in need of medical treatment.”

The drug, which Mr. Carter takes orally as an oil and inhales through a vaporizer, is the only medication he has found to date that quells the frequency and intensity of his seizures.

In a few weeks, his dwindling legal cannabis supply will run out, and it could take up to seven months to get more. His only option will then be to leave the country with his mother to get marijuana, his fifth such trip in four years.

Mr. Carter lives at home with his parents. His mother, Lanai Carter, keeps a baby monitor in his room, listening for sounds of a seizure. But in recent months, while routinely using cannabis, Mr. Carter has gotten his first taste of independent adulthood: attending a hip-hop concert, taking road trips with friends and dating.

His teenage years were spent on long, expensive overseas trips for treatment and trying to navigate Australia’s complex medical marijuana bureaucracy. In 2014, when Parliament was still discussing how to regulate medicinal marijuana, Mr. Carter and his mother went public with their story.

“Nothing seemed to be moving,” Ms. Carter said from the family’s home in Loganholme, a town 18 miles from Brisbane, of those years before legalization. While traveling for her son’s cannabis treatment, Ms. Carter began lobbying. That meant pushing her son more and more into the spotlight.

Mr. Carter has appeared twice on the Australian version of “60 Minutes,” and been featured in reports by the Australian Broadcasting Corporation, Buzzfeed and the radio station Triple J.

It is “frustrating” that Mr. Carter “is well known, but it still hasn’t got him anywhere,” said Lucy Haslam, a medical marijuana activist. Ms. Haslam’s son, Dan, was a central figure of the legalization movement until he died from cancer in 2015, at 25.

Many Australians seeking marijuana for medical reasons obtain it illegally, preferring the risk of criminality to the struggle with bureaucracy. Only about 350 Australian patients have been approved to use cannabis legally. The process, activists say, is needlessly slow, expensive and complicated. Patients seeking prescriptions must obtain the approval of both federal and state health officials.

To get Mr. Carter a prescription, his mother and doctor filled out multiple applications, included 196 pages of supporting evidence, and obtained the written endorsement of six doctors and specialists. The process took 19 months.

Even once approved, patients may need to wait for small amounts of imported marijuana — another lengthy process often riddled with delays.

Much of Mr. Carter’s supply is donated, but if the family were to pay out of pocket, it would cost 16,000 Australian dollars, or $12,500, a month to get as close to his needed dose as possible. (The right strength is not yet available in Australia.)

Australia’s cannabis shortage means the Carters are planning to again go overseas to obtain the drug, their first trip since 2014.

After several anti-seizure medications failed to relieve his symptoms or resulted in debilitating side effects, Mr. Carter and his mother traveled in 2013 to North America to meet with specialists. They returned three more times over the next year, traveling to California, Texas, Washington and British Columbia.

It was in Seattle that a doctor prescribed cannabis to treat his headaches, nausea and poor appetite. The drug was dispensed the same day it was prescribed.

“I did get more energy,” Mr. Carter said of his treatment in the United States. Over the course of that year, he had fewer seizures and his brain tumor shrank seven millimeters in seven weeks.

His mother first applied for his medical marijuana in 2015, but it would take more than a year to get it. Now, the family must wait again, as the supply of dried buds and oils Mr. Carter relies on is rapidly dwindling.

“What patient should have to go through that?” Ms. Carter said. “The stress that this system creates for families and for sick patients is actually inhumane.”

On a drizzly recent afternoon, Mr. Carter was watching a movie at home with his girlfriend, resting after having a seizure earlier in the day. A few steps away, Ms. Carter was standing in her cluttered home office, crying. Medical reports, prescriptions and invoices were strewn everywhere.

“I want to put it in a filing cabinet and put it away,” she said as she sifted through papers. “It’s a nightmare. I can completely understand why people give up. Or don’t even start.”