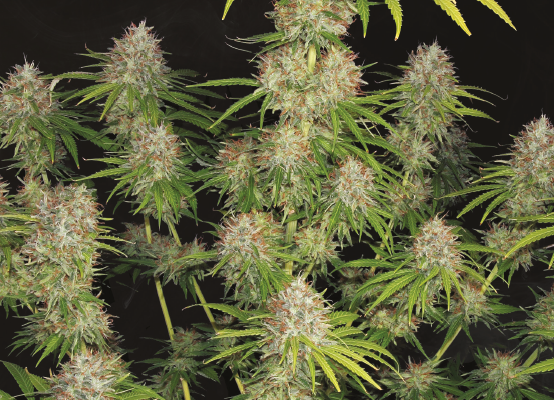 A CASE OF UNFORGETTABLE FORGETFULNESS

It’s about time again to report about a true big legend in the world of cannabis strains: a strain that has enjoyed a brilliant career as one of the most successful Dutch coffeeshop varieties ever and been awarded with countless prizes; a strain that has been copied most extensively and the popular name of which has been misused for completely different genetics also. I am talking about Amnesia.

Just like any other legendary and extremely successful cannabis strain, the origin and exact pedigree of Amnesia is partly shrouded in mystery, which goes along with the usual vivid discussions in various web forums. Undoubtedly, however, the original Amnesia strain was bred by Zwiep from the fertilizer company Hypro in Tilburg, The Netherlands. According to his story, he crossed a Neville’s Haze with an Afghani plant to create Amnesia. At fi rst it was solely available as a clone but, encouraged by the sensational feedback in the entire Netherlands, Zwiep developed a regular Amnesia seed strain also. What was missing, though, for a very long time was a feminized seed version of Amnesia, and it wasn’t before Zwiep teamed up with the feminization experts from Dinafem of Spain a few years ago that Amnesia fem seeds fi nally saw the light of the day, based on the original genepool. In return, Dinafem received the original Amnesia genetics from Zwiep and the right to also make use of the strain’s name. Dinafem then released the fem strain “Original Amnesia” which is claimed to have enhanced powers of potency and yield, compared to the regular seed version. Which certainly means a lot – after all, Amnesia is well-known for being highly productive and severely potent. Amnesia plants are furthermore characterized by their handy indica-style size, growing to relatively low or medium heights only, despite their mostly sativa lineage which is fairly unusual. Also their buds are leaning more towards the indica than the sativa side – as thick, bulbous and rock- hard as they are, luckily blessed with the high calyx-to-leaf ratio of a sativa though, and covered with shimmering resin glands in abundance. Another stunning characteristic of Amnesia is its exquisite Haze-type aroma with hints of incense, cedar and spices plus a bit of lemon. Not to forget its very powerful psychoactive effect of course which thanks to Amnesia’s sativa share of 70% is cerebral, euphoric and uplifting at first, then followed by a sedative or even narcotic indica stone that may give the smoker a good idea of how this strain earned its name… for instance, when he’ll find himself wondering: “Damn… what’s the name of this tremendous type of weed again?”

All these wonderful things Dinafem’s Original Amnesia achieves within only 65 days of flowering (i.e. about nine weeks of flowering) which is possibly record-breaking for such a charismatic Haze hybrid! Dinafem recommends high EC levels and lots of light to give this high-performance strain a chance to tap its full potential. If that happens, yields of up to 600g/m2 are easily possible. Original Amnesia loves to grow in hydroponic systems, and even outdoors she does very well, ripening by mid-to-end of October under natural light. She can grow as tall as 3.5 meters outdoors and deliver more than a kilo of primo buds per plant.

The Doc, however, conducted his Original Amnesia test indoors, based on three feminized seeds. Which germinated rapidly within three days and then exhibited strong luscious early growth. In the course of their four weeks veggie time, they grew into very compact bushy plants with rich branching and moderate heights – when The Doc induced flowering, they were 45, 58 and 60 cm tall. A quick response was given to the shortened light cycle, after one week already, The Doc noticed female pre-flowers at the shoot tips. What followed then was a breathtaking ride through the flowering stage: week by week, the three plants massively put on flower weight, with their buds becoming big, dense and rock-hard in the course of flowering. The lowest plant didn’t stretch very much in the flowering stage either, obviously carrying more indica genes than the other two. Which was also pronounced by its chubby bulbous buds that differed a bit from the other plants’ buds, the shape of which was more elongate, albeit being extremely solid and super-tight, too. But all the three plants had a very high calyx- to-leaf ratio in common and their spectacular buds looked like they had been sprayed with tons of glistening trichomes. The Doc praised, “Original Amnesia really has proven to be an outstanding producer. Within only nine weeks of flowering, super fat and tremendously resinous ‘canna-sseur’ buds were plastered all over the plants, sitting enthroned on the branches like some proud trophies. And their delicious fragrance is a sheer joy to me as they’re smelling wonderfully hazy, indeed. But, surprisingly, the aroma also has a yummy hint of banana!”

The Doc was also amazed by the fact that the plants precisely needed those 65 days of flowering stated by Dinafem. “These plants were so punctual I could almost have set my clock to their flowering time”, joked The Doc. He harvested the plants with ease, thanks to their high calyx-to-leaf ratio. After the drying process, it was about time for the official weigh-in of these three champion plants. All of them expectedly made it into the heavyweight class, with even the smallest plant almost hitting the 90g mark and the other two, with 108 and 117 grams respectively, easily making it over the 100g mark.

It felt like a long-awaited feast when The Doc smoked his first home-grown Amnesia weed. He first tested the pheno with a stronger touch of indica. This type of Amnesia bud smelled exactly like the buds of the two other, bigger plants though – it was a very finely composed, sweet and spicy aroma mélange of cedar, frankincense and a slightly fruity undertone which was still perceived by The Doc as a trace of banana. Very soon after the exquisitely mild, sweet and spicy Amnesia smoke had caressed his palate and flowed into his lungs, he sensed an irresistible grin spreading over his face, while in his brain a heavy neurone fire of euphoria was ignited. The Doc felt as light as a feather, as if he had booked an air ticket into higher spheres. He happily kept on levitating for a while, before the Amnesia plane approached to land again – there it was, that indica effect onset predicted by Dinafem which puts the smoker from flying to lying at a certain point. The Doc’s eyelids drooped and he entered into a state of deep relaxation, getting couch-locked. As heavily stoned as he was, he totally forgot to bid on an important item on ebay – three, two, one, The Doc got none! He didn’t forget though to roll the next Original Amnesia spliff, now filled with sativa pheno bud. Again that heavily uplifting and euphoric effect instantly kicked in, and this time, it took The Doc even closer to cloud nine. Also, flying time was longer, before those indica breaks were deployed again, gently putting him down to earth. He now felt as if his head was wrapped in a thick cotton wool cocoon, his inner world of thoughts was almost brought to a halt, and when he tried to recall certain things – for example the stuff he had to do the next day – they just didn’t come to his mind… so after two spliffs, Original Amnesia fully lived up to its name.

The Doc’s conclusion: “After an impressive cultivation performance, Original Amnesia proved to be a perfect lift-off fuel, and then it gave me a kind of narcotic brainwash also which spoiled any attempt to get my mind focused, almost completely shutting down my cerebral system. I guess that I’ll always remember that thought-eliminating effect, so Original Amnesia to me was a case of unforgettable forgetfulness. Without a doubt, it’s an adorable champion strain of awesome quality.”