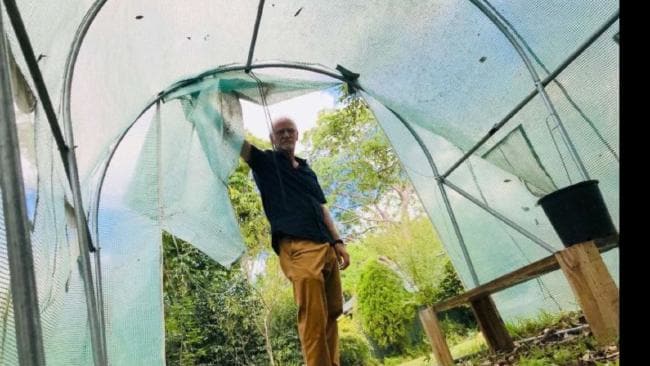 No parent should have to do this. At any stage.

“A couple of times there I carried Morgan into hospital weighing around 32 kilograms — actually carrying her in my arms and crying,” he told 7.30.

“No parent should have to do this. At any stage.”

After finding no doctor would take on the lengthy Therapeutic Goods Administration (TGA) application process for legal access to medical cannabis, he decided to take matters into his own hands.

He began juicing cannabis to treat his daughters.

Now his home has been raided and he’s facing the serious prospect of going to jail.

Morgan, 21, and Ariel, 25, have both been repeatedly hospitalised because of Crohn’s.

The side-effects of traditional drugs were severe.

“I got really bad arthritis … my knees were swollen and I couldn’t walk some days,” she said.

“I had a severe reaction to another drug called Infliximab, my throat started closing up, I was having anaphylaxis reaction, my face was swelling up, I was getting a rash.

“That was very serious.”

“I was so sick I wasn’t able to eat … I was in constant pain,” she recalled.

“The doctors were preparing [my parents], when I was going through the surgery [to remove my colon], the fact that I could die.

“It was pretty intense.”

They started taking the cannabis juice, with remarkable results.

“It was really within a month, and I was exercising and I gained weight, I got up to 50 kilos,” Morgan said.

Iain McGregor, professor of Psychopharmacology at the Lambert Initiative For Cannabinoid Therapeutics at Sydney University, said juicing cannabis was not at all like smoking the plant.

“In many ways, juicing is a positive thing to do because you don’t get nearly as much of the intoxicating element, which is THC [tetrahyrdocannabinol] and you get another component of cannabinoid, which is THCA [tetrahydocannabinolic acid], which has very strong anti-inflammatory properties in the gut.

“Proper clinical trials on THCA have not been done and this is one of the generic problems that we have with medicinal cannabis, this prohibition that we have over the years is really stymieing progress in terms of learning the therapeutic effects of the plant.”

It’s 18 months since medical cannabis was legalised in Australia, but Professor McGregor estimated as many as 100,000 Australians could be using illegal cannabis for a variety of health problems.

“They’re self-medicating with cannabis that they get from friends or grow themselves,” he said.

“Whereas the official system to date has only serviced, I think, 500 patients.

“There’s this massive discrepancy between what Australians are doing covertly, and the overt approved system, which, so far, I would say, is probably not delivering.”

It is alleged Mr Taylor had 107 plants when he was raided by police.

“That’s a lot of plant material.”

He does not understand why the Government is making it so difficult to access.

“I think it’s just wrong the way the Government has set this up, that we cannot access this amazing plant,” he said.

“So many parents are screaming out for it.

“Unfortunately there are so many parents getting arrested for it.”

‘I would not want to see the floodgates opened’

The Federal Government said it was trying to streamline the approval process by eliminating the separate red tape in each state.

Last week, the NSW Government handed control over its program to the Federal Government.

But addiction specialist and member of the Royal Australasian College of Physicians, Adrian Reynolds, urged caution about making access too easy.

“I would not want to see the floodgates being opened before we have much more robust evidence around the benefits, risks and harms associated with the cannabinoids,” he told 7.30.

“That’s lamentable in a world where we need to focus on good evidence for improving wellbeing for people of our country.

Dr Bastian Seidel is the man who represents GPs across the country.

He says the current system is a basket case.

“It doesn’t make sense, your postcode should not determine whether you have access to treatment,” he said.

For now, Morgan Taylor just has to wait — for medical help and her father’s court case.

“I don’t really have many options left, because a lot of the medications I’ve tried haven’t worked for me, they’ve come with very serious side-effects,” she said.

“So it’s pretty scary to think about long term and how I’m going to manage my disease.”