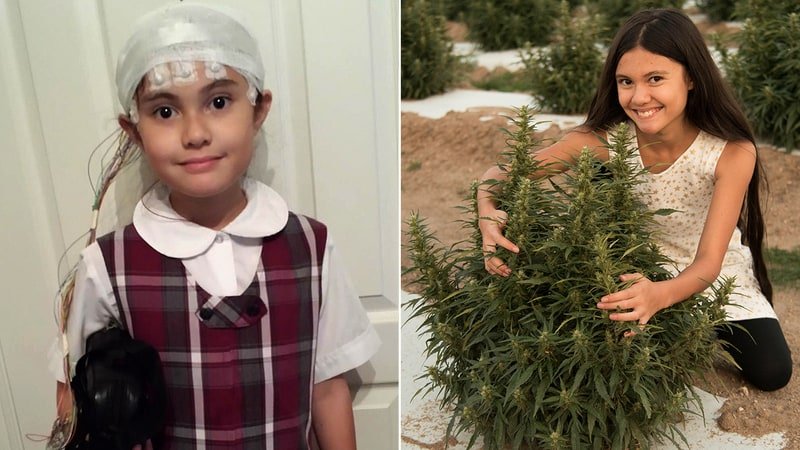 Twelve-year-old Alexis Bortell uses a cannabis oil called Haleigh’s Hope to prevent life-threatening epileptic seizures. She takes the oil orally by syringe twice a day, and always keeps a THC spray on hand in case she experiences an aura, or pre-seizure event. The auras happen maybe once every three to four weeks – far less often now that she moved to Colorado than when she lived in Texas. When doctors in Texas were left with no other option than to suggest an experimental lobotomy, her parents moved to Colorado. Cannabis had to be better than removing a portion of Bortell’s brain.

“I’m now over two years seizure-free because of my cannabis medicine. In Texas, our goal was three days, [and] that’s the max I ever got,” says Bortell, who’s now in the sixth grade. “It’s helped me succeed in school more, since I don’t have to go to the nurse every day because of auras and seizures. There was no medicine in Texas that would stop my seizures, and not only that, but they had horrendous side effects that would be worse than the actual seizure.”

Wise and articulate beyond her years, Bortell received an invitation from the National Organization for the Reform of Marijuana Laws (NORML) to lobby her representatives in Washington D.C. this past September. But she couldn’t go, and instead could only Skype: Since Bortell can’t go anywhere without her cannabis medicine, she couldn’t travel without committing a federal felony by transporting a Schedule I narcotic across state lines. What’s more, even if she could travel to D.C. – where marijuana is medically and recreationally legal – she can’t bring her medicine onto federal land, including the Capitol, national parks, monuments and military bases. (Her father, Dean Bortell, is a military vet.)

Now Bortell is one of five plaintiffs in a lawsuit against the federal government, and her attorneys argue that the Controlled Substances Act (CSA), which classifies cannabis as illegal, infringes upon various constitutional rights.

“This is not just a case about the CSA. This is a civil rights case that focuses on the rights of individuals using life-saving medication to preserve their lives and health,”

Bortell’s attorney, Michael Hiller, founder of Hiller PC and former professor of constitutional law at John Jay College of Criminal Justice. “It’s not just about cannabis, it’s about people’s ability to exercise their rights to free speech, to petition the government for a redress of grievances under the First Amendment, the right to travel, the fundamental right to be left alone and the right against Congressional overreach.”

The federal cannabis lawsuit team – co-counsel Michael Hiller, Lauren Rudick, Joseph Bondy, and David Holland – filed a complaint in September to the United States District Court for the Southern District of New York. The lawyers – who are all members of the New York Cannabis Bar Association – are working on the case pro bono in hopes of winning a watershed decision descheduling marijuana under federal law.

As the federal government is wont to do, the defendants — Jeff Sessions, the Department of Justice, Chuck Rosenberg, acting director of the Drug Enforcement Administration, the DEA itself and finally, the United States of America – will file a motion to dismiss on October 13th. If the judge grants the motion, the plaintiffs will file an appeal to the Second Circuit.

The case could have ramifications throughout the country. “If the court were to grant our relief, requesting a declaration that the CSA is unconstitutional as applied and enjoining the federal government from enforcing it, the case really has the potential to impact tens of millions of people,” says Hiller 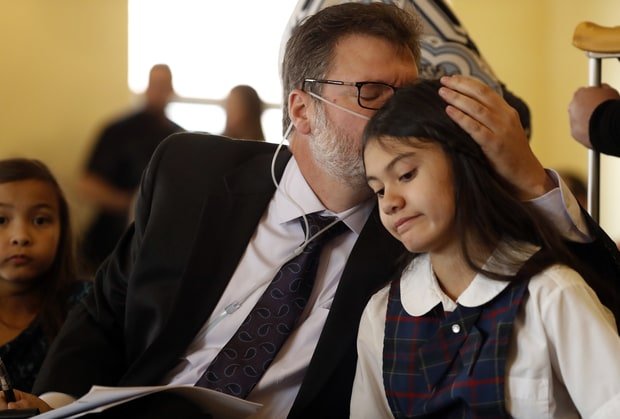 As a plaintiff, Bortell represents the thousands of children with epilepsy who stand to benefit from descheduling cannabis. But even broader applications and interests are at stake. Co-plaintiffs include six-year-old Jagger Cotte, a Georgia-based medical marijuana patient who suffers from Leigh’s Disease, which disables and kills 95 percent of its victims; Jose Belen, a disabled veteran of two tours in Iraq now living with PTSD in Florida; Marvin Washington, former pro football player, who’s now launched a line of CBD products; and the Cannabis Cultural Association, a nonprofit helping people of color enter in the cannabis industry.

The attorneys argue not only that the CSA infringes on the plaintiffs’ constitutional rights, but that the foundation of marijuana’s place under the CSA itself is bunk. “The whole explanation for why it’s a Schedule I substance is predicated on lies and racism,” says Holland, executive and legal director of Empire State NORML and former counsel to High Times magazine.

In their complaint, the attorneys allude to the past 10,000 years of history, highlighting the various ways in which mankind has used cannabis medicinally and functionally. Fast forward to the Eighteenth and Nineteenth centuries, the founding fathers wrote the Constitution on hemp paper, while pharmacists sold marijuana tinctures over the counter. (Marijuana and hemp, both different kinds of cannabis, are distinguished by their THC value.) By the 1920s and 1930s, cannabis became more closely associated with Mexican immigrants and African American jazz musicians. In 1937, Federal Bureau of Narcotics Director Harry Anslinger drafted the Marihuana Tax Act, imposing criminal penalties on the possession, production, and sale of cannabis, and commencing the modern day War on Drugs.

By the 1960s and 70s, cannabis became the common denominator between Vietnam war protestors and radical groups like the Black Panthers. Nixon’s own right-hand man John Ehrlichman came out decades later explaining that criminalizing marijuana was a means of criminalizing blacks and hippies: “Did we know we were lying about the drugs? Of course we did.”

When the CSA was enacted in 1971, marijuana was placed in Schedule I only “temporarily,” even though by definition it didn’t fit the category. Today, blacks and Latinos are still disproportionately victimized by prohibition. Even in places like Colorado, more minority kids are arrested for weed than anyone else, while in California, police arrest blacks for weed three and a half times more than whites. “We’ve always had the federal government policing our bodies,” says Jacob Plowden, co-founder and creative director of the Cannabis Cultural Association. And even legalization hasn’t always worked, he adds. This case is the only way to turn the system on its head.

“What is deeply troubling about all of this is that the CSA makes absolutely no sense,” says Hiller. “We know for a fact that the U.S. government knows that cannabis cannot be legally classified as a Schedule I drug, the requirements for which are a high potential for abuse, no medical efficacy whatsoever, and a substance so dangerous that it can’t be tested even under strict medical supervision. And we know cannabis doesn’t meet those requirements.” 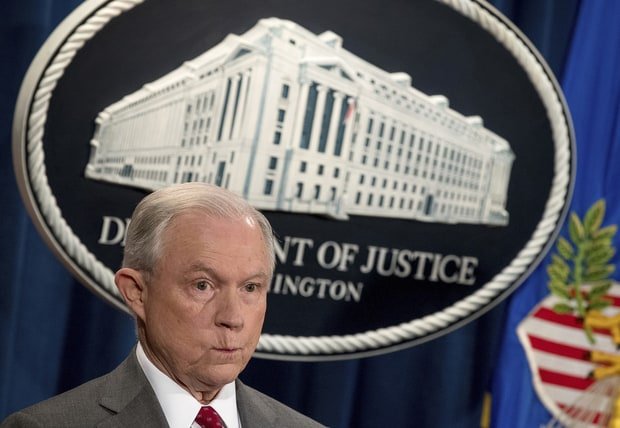 Attorney General Jeff Sessions – who has threatened to crack down on state-legal medical marijuana – is named as a defendant in the lawsuit. Andrew Harnik/AP

As Hiller points out, there is a disconnect between what the government claims legally, and how they actually operate. The government has a patent on cannabis for the treatment of diseases like Parkinson’s, Alzheimer’s, HIV-induced dementia and autoimmune disorders. And under U.S. patent law, you can’t apply for a patent unless you can demonstrate some form of the utility of whatever you’re seeking a patent for. “The government has obtained a patent for cannabis based on the fact that it works,” says Hiller. Moreover, since 1978, the federal government has been sending joints to medical patients as part of an IND (Investigational New Drug) program, only to find that cannabis alleviated symptoms for these 15 participants without serious side effects.

Then in 2014, the Department of Treasury issued a FinCEN guidance to banks, advising them on how to work with cannabis businesses. Meanwhile, 29 states and three territories all allow some form of cannabis to be used medicinally or recreationally – meaning more than 60 percent of the population has access to this plant. “It just makes no sense for the government to classify cannabis as a drug that’s so dangerous that it can’t even be safely tested, while at the same time encouraging companies to do business with cannabis businesses,” says Hiller. “It makes no sense for the Federal Government to have a medical patent and to distribute cannabis to patients for nearly 40 years through the IND Program, while at the same time claiming that it has no medical efficacy and can cause brain damage. Ask the federal government, ‘Do you really believe it?’ and the fact of the matter is, they don’t.”

As with same-sex marriage, Hiller says, if the federal government had to defend cannabis prohibition on facts, they’d lose.

“This lawsuit represents the truth,” says Bondy, a criminal defense attorney who is an expert in federal cannabis law. “Marijuana has a recognized medical purpose. For the government to persist in the position that it doesn’t is foolish.”

No matter who wins the case, it’s a sure bet that the losing party will appeal, according to Bondy. “These issues are so important to the public interest, so important to constitutional safeguards that a full evidentiary record has to be made. We welcome this as an opportunity to demonstrate fully and fairly that we are right.”

Meanwhile, Alexis Bortell still must choose between breaking the law and preserving her own life. “Every time I look around my classroom, I think about what my classmates will be when we grow up. But there’s nothing I can be because the government thinks I’m bad,” she says. “I know they’re wrong. I do hope we can win this case. If that happens, maybe I can be a doctor, or if I need to, run for legislature.”