Will “Big Cannabis” Be BIGGER and More Profitable Than Big Pharma, Big Alcohol and Big Tobacco? 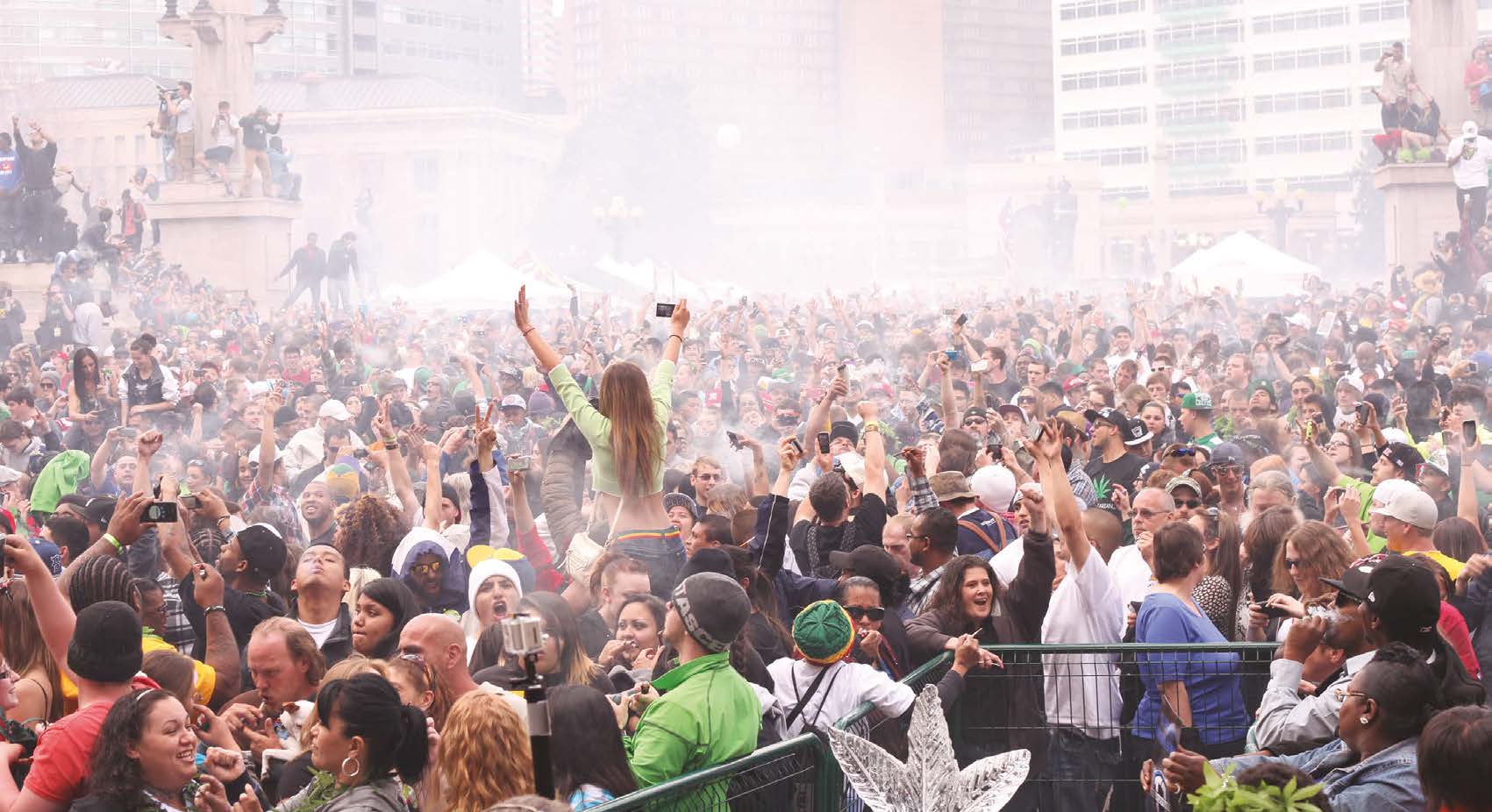 I first started working in the cannabis industry in 1992. The movement then consisted of healing the sick and dying during the AIDS crisis and was primarily composed of the LGBTQ community and what the mainstream world calls “The Hippies”, who enjoyed the plant for both getting high as well as “health and wellness benefits”.  The original “OGs” feared that someday, Big Tobacco, Big Pharma and Alcohol companies would enter the market and demonize the plant all over again. The “Cannabis Industry” today, however looks nothing like 1992.

Instead of long hair, tie-dye and counterculture, the new “movement / industry” feels more like a marketing and advertising campaign for what some are referring to as “Big Cannabis”.  The first “new wave” of “suits” campaigned and won the state of Colorado legalization for the responsible adult use of cannabis and then took over the movement.

Marijuana consumers continue to travel to Colorado for legal recreational sales and cannabis tourism is skyrocketing. Legalization there was a turning point in the drug war. It’s the beginning of allowing cannabis to heal a multitude of illnesses, it also contributes to overall wellness by giving us a better quality of life. Many advocates feel that this was the mark of the beginning of the end of cannabis prohibition and say it’s a beginning of peace in the drug war. Last but not least, the revenue can heal many worldwide economies.

What was a cultural movement decades ago has evolved into a polished, well-funded political and business lobbying network.

There is no doubt the industry has come a long way since Keith Stroup founded the National Organization for the Reform of Marijuana Laws with $5,000 from the Playboy Foundation in 1970.

Medicinal cannabis is now legal in the majority of USA states and many more countries around the world are importing and exporting.  Pharmaceutical companies are forming incubators and accelerator companies to create new drugs using endocannabinoids. Entrepreneurs, investors and corporations are considering Cannabis-assisted living centers and Marijuana tourism.  Legalizing recreational use, opportunities are now abound for a wide variety of the Pot Dot Com Boom entrepreneur millionaires and established big business. The industry is growing rapidly with investors catching the fever of mergers and acquisition targets.  Investors entering the market wonder how long this wave will build…Insiders believe we are just getting started.

The industry’s growth is fueled by new markets opening for business and by sustained growth in existing markets. In the USA, 30 states plus the District of Columbia (DC) have now legalized medicinal use, and nine states plus DC have legalized adult-use cannabis. In Canada, adult-use dispensaries launched on 17 October.

By 2016/17, the average investment had grown to US$1 million. Today we are witnessing ‘pot com boom investment 3.0’ in high-tech, REITs, sciences, services, in software and patents.”

Fueling this growth is the imminent Canadian deregulation of responsible adult-use cannabis with Canadian licenses for cultivation and processing which are being issued federally. Regulations will restrict the number of stores that can be owned by one business and the rules are designed to reduce too much vertical integration.

The Canadian business model leaves openings for the gray market. Although there is a heavy demand, there will be no cannabis lounges for now.

The rise of big businesses has brought about more innovation, and it has spread cannabis to areas it wouldn’t have spread to if were just small businesses.

But the problem is that a lot of the ‘mom and pop’ type operations have been blocked out. Companies from Canada are doing a phenomenal job of growing, but that’s making it harder for those without a lot of resources.”

Tobacco has not experienced consumer growth in decades, and there is huge stigma around smoking. Big tobacco already has the infrastructure in place, including the cultivation, production, branding, distribution and packaging know-how, to make an immediate lateral move into hemp and cannabis. For alcohol, it’s more about expanding revenue in an industry where they can leverage existing assets.

This is especially relevant in the recreational, adult-use market, where products like THC-infused beverages can expand companies’ offerings.

Pharma companies have been tracking the success of the movement for many years.  They are under pressure in the US market to move away from opioids, along with the huge potential from cannabis-related medicine, clinical trials and more.

This has the potential to shape the industry. To put the size into context, Constellation Brands alone has annual revenue of US$9.34 billion. Big Alcohol, Big Tobacco and Big Pharma not only have scale but have been known for aggressively working to change legislation and public debate in their favor. Indeed, Big Tobacco worked for decades to suppress research into smoking-related harm.

It’s often said that roughly 20 percent of the US population lives in states that passed ballot initiatives allowing for-profit cannabis. What doesn’t get as much attention is that Washington DC passed a ballot initiative in 2014 for a ‘grow and give compassion’ model.  Under the system, home production is permitted, personal use is tolerated (anyone is allowed up to 2 ounces) and growers can give cannabis away.

This has led to a hazy ‘grey market’.  Pop-ups are commonplace, with far reaching social media connections, operating out of mansions, bars, restaurants and at one point even a building occupied by the Washington Post.

This lounge in downtown Washington recently offered three floors of edibles, pre-roll flowers, wax and other cannabis products, available as free “gifts” for customers making an appropriate donation. The lounge was subsequently closed by Police, but charges against organizers were abandoned – and other pop-ups expand and grow.

In this grey market, some users confuse lounges and delivery services with legal conduits. Along with the grey market confusion and lack of regulation, the bigger problem with the DC model, at least for the government, is that it does not provide revenue through taxation. This alternative that does is a big brother government monopoly. This is impossible for US states because of federal prohibition. If a state created a monopoly for production or distribution, it would be forcing state employees to violate federal law.

However, it already exists in Uruguay. The cannabis market there is highly regulated, with just two licensed producers, consumer prices set by the government and controlled distribution. There are three ways Uruguayans can obtain cannabis: by purchasing it from one of 12 pharmacies, home grow or as members of cannabis clubs. In a country of 3.4 million, there are 22,000 registered purchasers, 83 registered cannabis clubs and 8,200 registered home growers.

Challenges have emerged with confusion about the law from the officials, demand exceeding supply and poor access to investments that has even led to pharmacies abandoning the sale of cannabis. The banking system won’t lend to the industry because of Federal US law prohibiting American banks from working with partners involved in controlled substances. Banks have refused to even maintain accounts for pharmacies.

In doing so, it could be taking a leaf from studies into alcohol, which show that government monopolies are better for public health. A government monopoly leads to an increase in retail price because product innovation is slower. Higher prices are seen as important in reducing harm, especially among young people.

Uruguay’s market is heavily regulated, and it has taken a while to get up and running, but their model is very different from the for-profit model – and it is one of the middle-ground options.”

Responsible usage has reached legality in just 10. Given this wide spectrum of legal status, the average grow operation remains much as it always had been: a small time affair running on second- and third-hand equipment, driven by former drug dealers, criminals and societal dropouts and operating in the grey area of the law where police raids and DEA seizures are still commonplace.

The truth of the matter, however, is that the cannabis industry has evolved far beyond those antiquated stereotypes. The commonplace dreadlocked, stoner growers, 30-year-old diesel generators, and cash-only transactions have morphed into GQ-styled investment bankers, state-of-the-art indoor grow facilities, extraction equipment, testing labs, and multimillion-dollar capital funding deals. But the most recent evolution of this industry, and, in my mind, the strongest indicator that it’s now just a matter of a few years (at the most) before we see deregulation on the federal level, is the evolution of the business model itself.

The cannabis industry is no longer just about weed. Today’s merchandise still includes hemp products, which have been around for millennia but finally achieved federal deregulation after the passage of the Mitch McConnell championed 2018 Farm Bill, as well as a spectrum of newer, lesser-known goods that require engineering on a molecular level. It includes products like CBD oils and drinks, which maintain the therapeutic benefits of cannabis while shedding the intoxication; edibles, which keep that intoxicating effect; topical oils and creams; even cannabis-infused wine and beer.

Today, there are literally hundreds of companies in operation around the world that research, develop, and market everything from cannabis soda to medication for the treatment of childhood epilepsy.

As of 2018, the legal marijuana industry brings in more than $10 billion in the U.S. alone and employs more than a quarter-million people. To achieve such success with a product that the federal government still lists as a Schedule 1 drug, alongside of heroin and cocaine, isn’t just amazing but indicative of where things are going.

The last piece of the resolution won’t necessarily involve stranger, funkier products or even FDA-approved cannabis-based medications (the latter has already come to pass with the FDA’s green-lighting of GW Pharma’s Epidiolex last June). For the federal government to finally give up this costly, prolonged, largely pointless battle, we will need to see the arrival of the multinational cannabis corporation.

Tilray and Canopy are today’s big names, but, as is often the case, they are not likely to remain there for long. The Next Generation Is Already Here: newer, smarter, more enterprising firms are entering the field and taking the multinational corporate model to the next level. On

The global cannabis industry could be worth as much as US$130 billion a decade from now if a wave of legalization sweeps the U.S., Europe and Latin America, according to a report by New York-based investment bank Jefferies Group LLC, which initiated coverage of several companies in the space.

Projections for the global pot sector is based on the prospect that in the coming years the U.S. and all countries in Europe and Latin America will legalize cannabis for responsible adult use and medical purposes, as well as the potential penetration of other industry sectors in those markets, such as pharmaceuticals, alcohol, health and wellness and pet care.

Liberalization of the hemp and cannabis space in those markets is estimated to be worth about US$80 billion by 2029 and is added on top of Jefferies’ base valuation for the global cannabis industry of US$50 billion by 2029, a conservative figure that only includes the 22 countries which have already legalized marijuana for medical or recreational purposes.

However, when it came to evaluating the value of the cannabidiol (CBD) market, Jefferies took a more bolder perspective relative to other forecasts. Jefferies expects the global CBD market – which is likely to be focused on the U.S. for the near future – worth US$3 billion in the next three years, and just US$4 billion by 2029.