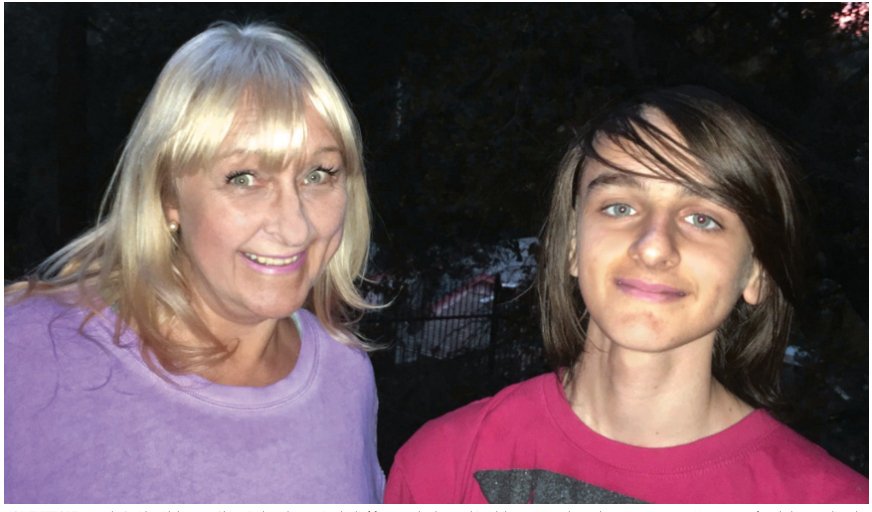 Now 16 and cancer-free, Chico has decided to dedicate himself to spreading the word about the benefits of medical cannabis, which he used to ease the effects of chemotherapy and radiation treatments.

When he received a cancer diagnosis one month before his 11th birthday, Chico Ryder didn’t know that while one door closed, another opened.

Originally from England, Chico and his family now live in Woodland Hills. At the time of his diagnosis he and his family lived in Calabasas, where he attended A.E. Wright Middle School.

His mother, Angela Smith, said her son’s oncologist prescribed a synthetic form of tetrahydrocannabinol (THC), the active ingredient in cannabis, to relieve the nausea Chico felt from his treatments. The substance didn’t work very well, she said, so she started looking into getting the real thing after both of Chico’s home-care nurses told her it was more effective.

“I mentioned it to the doctor, who laughed and said, ‘We can’t have an 11-year-old boy smoking joints.’ I asked if there was an oil or a tincture, some sort of edible that would help,” Smith said. “Eventually the doctors, kind of reluctantly, gave him a recommendation for cannabis, so that’s where the journey started.”

Chico’s treatments left him unable to walk and eat. His mother said he spent more time in a hospital bed than at home. When she suggested cannabis oil to him, he wasn’t sure what to make of the idea.

“I thought it was funny at first. I kind of knew that cannabis wasn’t a serious drug like opiates. . . . I was open-minded about trying it,” he said. “I was on five or six drugs for nausea, and none of them really worked, but the cannabis did. I ended up stopping taking the nausea drugs. It would give me an appetite. It helped me sleep.”

Smith said that after her son started taking cannabis oil he coped with the treatments much better. She started doing more research and said she found evidence that THC and cannabidiol (CBD), another active ingredient in cannabis, are effective in treating the cancer itself, not just easing the effects of chemotherapy.

“It was shown that THC in many cases actually has an antitumor action, so it kills cancer cells if you ingest it at an appropriate dose. And CBD actually prevents the metastasis of cancer,” Smith said. “This was five years ago, so the information was much less available than it is now, but I thought, if the doctors are willing to prescribe cannabis for the palliative effects of the chemo, then they must be confident it won’t interfere with the actions of the chemo.”

In 2015 the National Cancer Institute, a federally funded agency, concluded that cannabis is effective in killing cancerous cells, as well as helping prevent their development.

Smith started giving her son “massive doses” of THC oil to aid the chemotherapy in fighting the cancer. He was declared cancer-free in 2013 but has continued to take a daily dose of both THC and CBD oils as a preventive measure.

Now Chico is growing his own marijuana to acquire the oil. He recently harvested his second crop. While it is legal for adults to grow marijuana for personal use under Proposition 64, which was passed last year, minors like Chico still need a medical recommendation under Proposition 215, the medical marijuana initiative passed in 1996, to grow the plants.

“I’m really happy with (my plants). I always thought nature was cool, but I’d never thought about growing plants of my own,” Chico said. “Growing was hard at first, but I’ve made it work. I’ve found organic, natural ingredients to help the plants grow.”

He’s writing a book with his mother about their experience dealing with cancer and how cannabis helped fight the disease.

Chico is also the subject of a documentary that is due to be released next year. “Weed the People” was produced by radio host and actress Ricki Lake.

A camera crew documented Chico’s experience during treatment and the events surrounding his recovery, such as his return to school after his remission.

Chico said that when he started back at school his friends had questions about his treatment and assumed he was smoking joints to get healthy.

“I explained to them why and how it works, that it’s not just me smoking weed and getting high,” Chico said. “All my friends have been really supportive and think it’s really cool what I’m doing.”

It was through the documentary that Chico connected with Aunt Zelda’s, an organization that sells lab-quality cannabis oil and other products to help fight cancer. They supplied the oil Chico still takes to prevent the cancer from returning, supplementing what he is able to obtain from his own plants. He was recently named the company’s pediatric goodwill ambassador.

“After I found out all about how (cannabis) can help, I saw how it was kind of hidden from the public,” Chico said. “I found that kind of shocking, and I just wanted to help people and get the word out that it’s really not a bad drug and that it can really help many people.”